The Best of Simon and Kirby ($39.95) lovingly reprints 26 stories from 1940 to 1960 by the first comic-book creators to have their bylines on the cover, in an era that usually didn’t have creator credits anywhere at all. And well they should: Simon and Kirby conquered just about every genre in comics, and invented one or two. 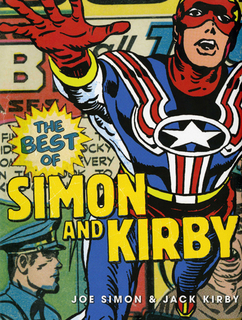 Simon was the duo’s front man, who negotiated deals with publishers, but was also a writer, penciler, inker and editor. Kirby was the virtuoso penciler (and sometimes inker) whose jaw-dropping speed was equaled only by his talent and imagination. And if the latter is a familiar name, that’s because “King” Kirby is usually lauded as the man who established the visual language of action comics and co-created (with Stan Lee) Marvel Comics’ major superhero characters, including Iron Man, Thor, Hulk, X-Men, Fantastic Four, Silver Surfer and Black Panther. What launched the duo into the firmament was a character they created in 1940 for Timely (now Marvel) Comics, a super-soldier wrapped in the flag: Captain America. The Star-Spangled Avenger was an instant hit, and faster than you can say “Keep ‘em flying!” Simon and Kirby were able to write their own ticket. More success followed at National (now DC) Comics, where they revamped Sandman and Manhunter into superhero action features, while also creating one of the most successful wartime books, Boy Commandos.

The latter made a success of kid-gang features, such as Boy Champions, Boy Explorers, Boys Ranch, Newsboy Legion and Young Allies. Ironically, most of these kid gangs had at least one tough-talking kid from New York’s Lower East Side, patterned on “Brooklyn” of the Boy Commandos … who was based on Kirby himself.

World War II interrupted their careers (like it did almost everyone in the industry), but on their return they created another genre: romance comics. It may seem odd that a team known primarily for adventure, horror, sci-fi and war comics could also prove adept at soft material lobbed at young girls, but apparently Simon and Kirby could do anything. And romance became an enormous seller in the post-war years, as the superhero boom faded.

Simon & Kirby continued with hits in the 1950s, especially in the burgeoning fields of horror and war. That is, until the comic-book witch hunts of the 1950s, which nearly destroyed the industry. Simon & Kirby reluctantly contributed there as well; the Kefauver Senate committee investigating links between comics and juvenile delinquency showed an issue of Simon & Kirby’s Black Magic on national TV.

For many years this seminal duo’s impact has been largely overlooked. Titan is correcting that with The Best of Simon and Kirby, with its beautifully restored artwork. It’s hard not to see the importance of these men, with reprints from eight different genres (superheroes, science fiction, war, romance, crime, Western, horror and humor), from a gaggle of publishers over a 20-year period. Their output was not only eclectic and prodigious, but unique in the history of comics. Nailing that point home are essays from writer and comics historian Mark Evanier, which precede each section, offering background and context for the various stories.

Fantastic, yes. But I’ve been saving the best for last. The Best of Simon and Kirby is just the first volume in a planned “Simon and Kirby Library.” Five more volumes are listed on the inside cover, including two for superheroes and one each devoted to crime, romance and horror.

That’s news worth cheering, as many of these comics – especially romance books – have been ignored during what is shaping up to be the golden age of reprints. And though they may be a little dated, they will fairly bleed history.

While those other volumes are in the future, we have Best today. It not only fills an important gap in comics history, but is an enjoyable sampler from two men who knew comics better than almost anybody who’s ever worked in the field.

So settle in on the couch for a good long read. You’re in good hands – the amazing hands of Simon and Kirby, the first rock stars of comic books.