I enjoyed the graphic novel Some New Kind of Slaughter – or – Lost in the Flood (and How We Found Home Again): Diluvian Myths from Around the World. But the book (and, obviously, the title) nearly wore me out. 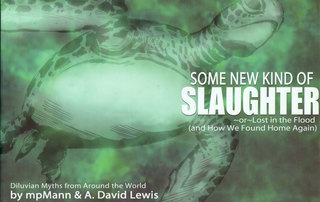 Slaughter (Archaia, $19.95) is by A. David Lewis and mpMann, who worked together on The Lone and Level Sands, a graphic novel retelling the Israelite exodus. With this book they once again tell an ancient story – many of them, in fact – by combining flood myths from around the world.

Lewis uses as his framework the oldest such story, from a tablet fragment dated to 17th century BC Sumeria. As this tale goes, Ziusudra, king of Shuruppak, is warned by the god Enki to build an ark, because the gods have become annoyed with the clamor of men and are sending a flood to wipe them out. Ziusudra does so, saving humanity.

Obviously, this has similarities to the most familiar flood story, that of Noah from the Book of Genesis. Which is also included, as are many, many more. Lewis achieves this by showing Ziusudra having visions and hallucinations on the deck of his boat on the long voyage of the other flood tales. In this manner, all the flood stories are in some way true, and all are in some way related. Interpretation is left to the reader.

But keeping up with all this channel-switching made my brain hurt, and the creators explain why in the introduction: “Despite a few recurring motifs such as giants, snakes and turtles, the stories vary so much as to … not come together in a single coherent story. But they do echo each other in their themes and leitmotifs, and they can be strung together and play off each other.”

So I had to read Slaughter twice (and take notes the second time) to keep it straight enough to understand it. I kept confusing this myth with that legend, this group of aborigines with that group of natives, this dream with that vision. Because there are a lot of them!

Here are some I was able to Google: Manu and Matsya, the fish incarnation of Vishnu (India); Yurlanggur and the Wawalik sisters (Australia); Tamendonare and Ariconte (Brazil); the goddess Nuwa patching a hole in the sky, and Gun battling Gong-Gong (two myths combined as a story within a story, China); a flea weeping, eventually leading to a spring overflowing (Germany); Anatiua harassing the Carayas (Brazil again); the origin of the Nile (Egypt); the old man who saves his family after the amphibian that supports the world shrugs, and Kezer-Tshingis-Kaira-Khan re-creating everything (Mongolia); Manabus battling the Ana maqkiu (Menominee tribe near Wisconsin-Michigan border); and Kuamachi punishing the Star People (Venezuela).

And there are more, including a fictional storyline about a modern woman, “Dr. Boatwright,” in search of her family during “Hurricane Carla,” which seems loosely based on News Orleans and Hurricane Katrina. As the introduction admits, “we researched myths, songs, jokes and even resorted to pure invention.”

If there’s a criticism to be made, it might be that Slaughter is too complicated and too ambitious for the average reader. But this virtuoso turn by Lewis and Mann should be included in academic courses on graphic novels, and those who just like a challenge – like your humble narrator – will enjoy it as well. 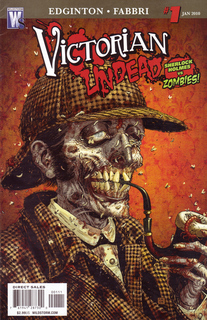 * People I respect keep telling me how great artist Jesse Marsh was drawing Tarzan for Dell and Gold Key from 1947 to 1965, but so far I don’t see it. Dark Horse is reprinting Marsh’s work, which is now up to volume four, with rave forewords by Richard Corben and all three Hernandez brothers. But, as I said, even with Tarzan: The Jesse Marsh Years Vol. 4 under my belt, the art still seems pretty pedestrian to me.

* We all know zombies are popular these days, but do we really need a book about zombies fighting Sherlock Holmes?

After reading Victorian Undead #1 (WildStorm/DC), I have to admit … it’s a capital idea! Good show! Pip pip! And other such cliches.

I’ve only read the first issue, but writer Ian Edginton and artist David Fabbri have created a remarkably plausible and entertaining scenario. Looking forward to the next issue, when – the game’s afoot! And hungry for brains!

Comment by Luke Blanchard on December 19, 2009 at 2:12pm
Some New Kind of Slaughter is a terrible title for a book with that subject.

As regards Jesse Marsh, I learned to appreciate his art from his Ape-English Dictionary pages. You could try paying close attention to his backgrounds and animals. Sometimes his art is a bit Alex Toth-like in its simplification and use of heavy blacks, as in the climax to the story from #6. I often find his Tarzan figures stiff, and his faces can be inadequately expressive.

Comment by Captain Comics on December 19, 2009 at 2:19pm
There's an anecdote in the front of Slaughter telling how they came up with the name, including the pseudo-acronym (SNKS, or sinks). But it doesn't matter how clever the anecdote is if, as you point it, it comes up with a title in opposition to the subject matter. Maybe it's ironic?

I'll take your advice on Marsh, and see if I'm more impressed. I have noticed his animals are better than his humans!

Comment by Jeff of Earth-J on December 19, 2009 at 5:00pm
I read three of the Marsh volumes in quick succession, then I had to take a break before beginning the fourth. My plan is to move directly into the Joe Kubert years, a goal I've dangled in front of my nose like a carrot tied to a stick. I'm surprised to see much of ERB in these Tarzan comics at all, but there are stories of Princess La and the city of Opar and Pal-Ul-Don mixed in amonst the dinosaurs, English knights and Roman soldiers. Concerning the art, I think Richard Corben's overview was a fair assessment, pro and con. I like the Tarzan collections more than the Turok ones, I think, because even if there's a certain "sameness" to the stories, at least they're about Tarzan. I wish Dark Horse would get back publishing a few more Joe Kubert archives; one or two more ought to do it. They're going to run out of Kubert material to reprint long before Marsh, and I'd like to see more of a variety. They should alternate a Marsh volume with a Kubert volume, and when they run out of Kubert, they should start a Russ Manning series. In this ecomony, though, I wonder who's buying these Marsh volumes besides me and Cap. :)

Comment by Captain Comics on December 19, 2009 at 6:34pm
Speaking of the economy, probably one reason you don't see many Kubert volumes is that you could probably buy the back issues for about the same amount of money, so they -- like the Marsh volumes -- are also catering to a select crowd and not likely to be big sellers. That's my theory, anyway.

And I have a vague memory of Romans in one of the ERB volumes -- toward the end, when I was losing interest (due to repetition of lost civilizations and Jane being kidnapped every two seconds).

Comment by Jeff of Earth-J on January 8, 2010 at 8:42am
Actually, a little research reveals that Dark Horse has collected all the Tarzans featuring Joe Kubert story and art. Beyond #335, he provided script and covers only, and eventually not even that. I didn't know that. I collected the title as backissues but stopped at #225.