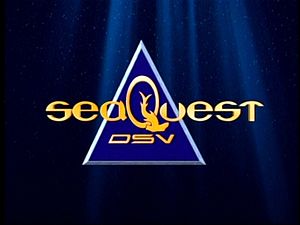 SeaQuest was similar to a lot of my favorite science fiction shows.  It debuted a couple of years after Star Trek: The Next Generation- one of my first sci-fi shows- and was clearly influenced by it.  It overlapped with Babylon 5, so it had a similar tone, similar special effects (though not quite as good) and a lot of the same guest stars.  It was created by Rockne O’Bannon, who would later create Farscape and the two shows shared common traits and themes.  SeaQuest wasn’t as good as those other shows, but it evoked them and that made me more agreeable to the show than I might have been otherwise.  I wanted to like it. 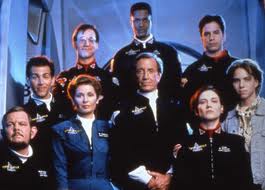 In the first season, there were plenty of things to like.  I thought it was an interesting choice to set a sci-fi show in sea rather than in space.  It opened up different story possibilities and helped the show stand on its own.  I enjoyed the deep sea exploration- the undersea volcanoes, the surprising discoveries, the possibilities of new life-forms.

I also liked the way that SeaQuest was grounded in science.  That’s not normal for me.  I once complained about another story “there’s too much science in my science-fiction soup!”  I’m happy to exercise my imagination.  But I liked the way that SeaQuest established as the next generation of science- one step beyond what was currently possible.  That gave the show an immediacy that you don’t always get in science fiction.

Of course, any series in any genre is going to depend on good characters and interesting relationships.  The heart of the series was the relationship between Lucas Wolenczak and Capt. Bridger.  Lucas was a teenaged genius placed on SeaQuest because his dad didn’t know what else to do with him.  Bridger was called back into service after previously retiring due to the death of his son.  The father-son relationship between those two main characters blossomed, and resulted in some of the best scenes in the series.

The first season wasn’t always great.  The acting was often mediocre, and occasionally worse depending on the guest star (William Shatner put in a horrid appearance as a Balkan dictator).  But the stories were usually solid.  And sometimes, everything came together for an episode or two and SeaQuest was really good.

However, really good wasn’t good enough.  SeaQuest was completely revamped for the second season.  The most noticeable change was that half of the cast was replaced.  The new cast was younger, sexier and supposedly more interesting.  In some ways, they were.  The first security chief was little more than a title until the season finale.  The new doctor had a lot more layers than the old one.  And the DeLuise brothers were a lot of fun.  But in many ways, they were steps sideways rather than steps ahead. The new security chief was little more than a title and the writers didn’t know what to do with the ingénue.

The biggest change, and the biggest problems, came in the writers’ room.  The new writers made SeaQuest a completely different show.  They abandoned the next-generation-of-science angle and quickly turned to sci-fi tropes such as time travel and flying saucers.  The plots were more ambitious, but also more convoluted and ridiculous.

About a third of the way into the second season, SeaQuest seemed to right itself.  The focus returned to the characters and the stories were more restrained.  One particularly good episode had SeaQuest face off against an AI patterned on one of Bridger’s old war games.  In other words, Bridger had to beat his former self.

Unfortunately, the solid footing didn’t last.  The second season returned to outrageous stories (one script was so bad that the actor who played Lt. Kerr stormed off the set).  Plus, the writers kept making minor mistakes.  In one episode, the crew’s UEO boss said they couldn’t simply stash someone in a safe house as the UEO didn’t own any.  The troublesome character was housed in a hospital instead.  However, a couple of episodes later, a cast member was confined to- you guessed it- a UEO safe house.  It was as if the writers weren’t talking to each other.  Since they couldn’t be trusted with the little details, it was hard to trust them with the big ones.

I eventually abandoned SeaQuest.  I didn’t bother finishing the second season (and I’m ambivalent about trying the third).  It wasn’t always awful.  But it was inconsistent enough that I started bracing myself for bad things instead of appreciating the good things.

I wanted to like SeaQuest.  The first season reminded me of some of my favorite shows.  It didn’t quite measure up, and then it fell apart.

Comment by Jason Marconnet (Pint sized mod) on February 27, 2011 at 6:51pm
Thanks for the article, Chris. I watched Seaquest in it was first on. I remember that I didn't watch much into the 3rd season though. It had gotten pretty ridiculous. While I like Michael Ironside, I preferred Roy Schieder and didn't like that he had been replaced. I liked some of the more crazy sci-fi elements of the second season but the 1st was the best. I haven't seen it in years though. I was also in late elementary or middle school when this was on. So I was easily entertained. I do remember that the Bridger/Lucas relationship was one of the more interesting aspects of the show. I liked that it was about the ocean. I always liked anything about the water so the fact that it explored unkown parts of our world in the water, really apealed to me. The first season also had some end of the show narration about actual nautical science by Bob Ballard who was at the time a big deal in under water exploration.

Comment by Jeff of Earth-J on March 1, 2011 at 4:27pm
I watched Seaquest its entire run. As I recall, it was up against The New Adventures of Superman, and DSV won out. I did eventually buy Lois and Clark on DVD, and although I wouldn't mind seeing Seaquest again, the last time I checked the DVDs were "priced for the rental market" as they say. It reminds me of Space: 1999 in that it underwent such a drastic change between seasons. Great cast, though... some of my past and future favorites, and some of Tracy's as well.