“Okay.  You have to remember I’ve taken enough creative writing and drama courses that I come at this from the writer’s perspective.”

“Well, the Fantastic Four are a unit.  They’re not only a team, they’re a family.  As a team and a family, they have certain inter-personal dynamics.  For a writer, it’s interesting to ask, ‘How do those relationships change when you remove one member of team?’  It’s exciting to explore those changed dynamics.

“The first time they did this was in the ’60s.  The writer took Sue Storm off the team.  She was pregnant and she went on maternity leave, because that’s what you do when you’re pregnant.  She didn’t leave the family or the title, but she was replaced on the team by Crystal.  So you get to see how the team is different when the fourth member isn’t Reed’s wife or fiancée but a potential love interest for Johnny.  Eventually, Sue is done with her pregnancy leave and she comes back to the team and Crystal leaves again.

“Who left this time?”

“The Thing.  He was tired of being over-shadowed by Reed. He’s not technically part of the family and he thought he could do better on his own.  He even had his own comic book at the time.  So they replaced him with She-Hulk.”

“Exactly.  So you get to see how the team is different without the Thing.  They’re maybe more of a superhero team but less of a family.

“The third time they did was in the ‘90s.  This time, they killed Reed Richards.” “Yes.  You know, the person used to just leave the team but that’s not good enough anymore.  Now they have to kill them.  So they killed Reed Richards and replaced him with Ant-Man.”

“Is he like Spider-Man but with the proportional strength of an ant?”

“Uh, no.  He’s more like an Aquaman for insects, except that he can also shrink down to their size.”

“Yeah, he was one of the founding members of the Avengers--”

“Right.  So you get to see how the team is different when Sue is the leader instead of Reed.  You learn new things about Sue and see skills you didn’t know she had.  But eventually the writers explored that angle and, because this is comic books, they brought Reed back.

“So now it’s the Human Torch’s turn.  I actually wrote something a couple of years ago that this is a story they should tell.  Every other member of the team has had a significant absence.  It would be cool to see what the team is like without Johnny.  What is Sue like when she doesn’t have to worry about her younger brother?  What is Ben like when he can’t define himself by his rivalry with Johnny?”

“What happens to the team when the Human Torch isn’t the one rushing off into trouble?”

“But he’ll be back in five years?”

Spider-man was at least buried (alive) and MIA for a while by the title villain during the "Kraven's Last Hunt" storyline in Amazing Spider-man.

Instead of replacing him, or doing without him, Marvel could bring Johnny back quickly in a changed form.

I'm thinking . they could bring him back as a cute little robot. That would be different.

I don't think that Aquaman has ever been dead, but he's not really major, either. He comes and goes and nobody much cares, so there's no need to keep replacing him with a younger version to keep him relevant. I also don't think Ray Palmer has ever actually died, but I could be wrong. 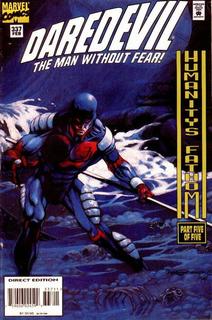 'm not sure Daredevil has ever died, but I imagine there were points in the 1990s, especially during his armored-costume days, when he wished that he were.

Comment by Cavaliere (moderator emeritus) on February 5, 2011 at 4:58pm
"I don't think that Aquaman has ever been dead, but he's not really major, either."

He must have been actually dead or he couldn't have been resurrected by the White Lantern.

AND Aquaman was replaced by a younger version, before he was even dead!

(Aquaman, Sword of Atlantis featured a young man named, wait for it... wait for it... Arthur Currey, who was advised by a squid-headed guy who, as it turns out, was the original Aquaman somehow transformed during One Year Later. The original was later murdered in that series.)

And now you loathe... the rest of the story!

I don't figure the Human Torch to be gone more than two years, tops (although it WOULD be fun to replace him with Jim Hammond or Tom Raymond!)  I mean, shucks... we didn't even see a dead body!  Marvel, at least pretend you give a crap!

Mr. Silver Age said: "I'm thinking . they could bring him back as a cute little robot. That would be different."

I figured he could come back as a creature of pure flame. He could have a romance with a cute solar prominence.

There's no doubt the Torch will be back someday, but I hope they do wait awhile.  I've liked Hickman's work on the FF so far, so I'll stick around to see where he goes from here.  Those new costumes, though...