In the 1980s, the Super Powers Collection, a toyline based on DC Comics characters, was licensed for use in a variety of countries. In Brazil, kids must not have been satisfied with playing with American heroes such as Batman and Superman.  Fixing that problem, toy company Gulliver Juguetes decided to add their own character to the mix: Captain Ray!

Who is he? What are his powers? Did he ever fight Superman in the skies over Buenos Aires?

Find out in the latest entry at Comics on the Brain! 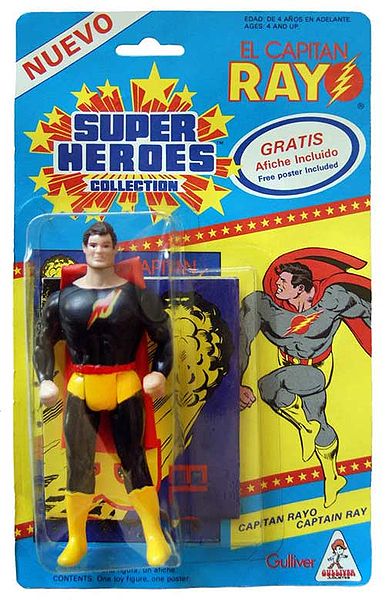 Comment by Philip Portelli on February 1, 2011 at 7:47pm
Looks like a bootleg or takeoff of Superman. Perhaps it's similar to the Super-Amigos where they repainted Green Lantern to be the Riddler with his power ring still visible!

I don't specifically address this in my blog (linked above), but he isn't a bootleg at all.

The figure was a licensed off-shoot of the Kenner toy line that reused molds from two characters and a decal material from Flash. That means Kenner gave them all the appropriate materials to build their own hero.

Funnily enough, in the Final Night event, The Ray ends up trying to help out a village in Latin America stave off the chilling effects of the sun being snuffed out.

Coincidence?  Or something more...?