Web-Spinning Heroics: Critical Essays on the History and Meaning of Spider-Man (McFarland, $40) is a remarkable new book on Marvel’s wall-crawler for a variety of reasons.

Fair warning: Your humble columnist has an essay in the book (on whether J. Jonah Jameson is a hero or a villain). But other than that it’s really very good. Web-Spinning covers a variety of genres and approaches, offering something for everyone from fans to academics – which, we learn once again, aren’t mutually exclusive conditions. 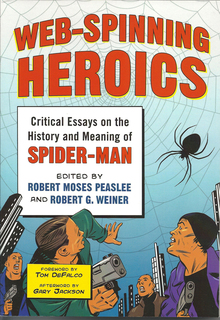 The book is edited by Robert G. Weiner, an associate humanities librarian, and Robert Moses Peaslee, an assistant professor in the College of Mass Communications, both at Texas Tech University. Neither is a beginner at this game; Weiner was the editor of Captain America and the Struggle of the Superhero: Critical Essays (2009), and wrote Marvel Graphic Novels: An Annotated Guide (2008). Peaslee has edited volumes related to visual culture, and written for Visual Communication Quarterly, Tourist Studies, NMEDIAC: Journal of New Media & Culture and the book Super/Heroes: From Hercules to Superman (2007).

But, as noted, being an academic doesn’t mean you can’t be a fan – or identify with the hapless Peter Parker.

“I do feel like Peter Parker in many ways,” Weiner said in an online interview. “I’ve always been sort of the ‘odd’ man out and never one of the popular crowd. The one who was unique and individualistic. [I] always had problems with girls, like Parker always seems to have. Even when he ‘gets’ the girl, he always seems to lose them, as do I. Yet he does things with terrific conviction, which I am inspired by.”

Which wasn’t the case with Peaslee, who said in the same interview that he related more to the guys in secondary colors.

“Honestly, to the degree that I've identified with any character, I've always identified most with the villains, particularly Doc Ock,” he said. “There's something about that fine line between great and horrible deeds that really resonates with me, and provides some of the most compelling narrative in the genre.”

But the duo’s interest in Spidey (and his villains) wasn’t the only reason for “Web-Spinning Heroics.” There were, Peaslee said, a variety of factors. 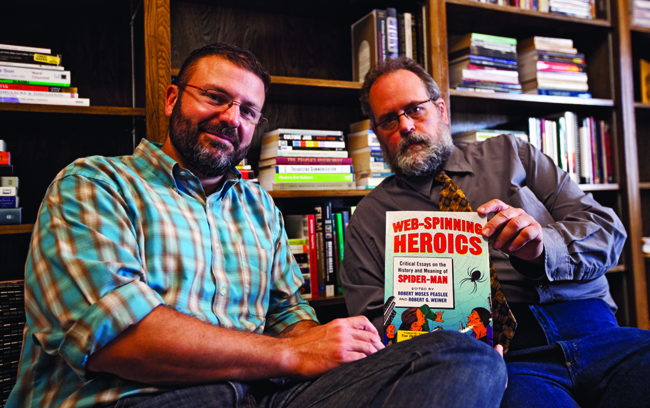 “One, it appeared to us that there was a need for a volume like this, looking at so prominent a character,” he said. “Two … the timing was good, with the upcoming release of The Amazing Spider-Man. And three, Spidey provides lots of material related to both our respective areas of expertise: Rob's done the bulk of his work in sequential-art studies, and my focus is popular cinema.”

Weiner agreed that the two made a natural team, whose “strengths play off each other.” And that the Andrew Garfield movie was pretty important, too.

“When I heard that they were rebooting the film series, it seemed natural to do a book like this on Spider-Man,” Weiner said. “Dr. Peaslee and I were both interested in seeing what could be written academically about this character that had not already been done.”

With their topic in hand, they set alight the Spider-Signal – and got more than they bargained for.

“We put out an international call for submissions,” Peaslee said, “and received about three times the number of abstracts that eventually found their way into the volume. Our goal was to put together a group of essays that accurately portrayed the great variety of research that’s being undertaken relative to the character and the larger Spidey universe.”

Weiner and Peaslee said they didn’t ask for any areas of emphasis, but discovered that the submissions broke neatly into categories all on their own. Five essays discussed topics pertaining to relationships between Spider-Man’s world and the cultural world in which he exists. Three essays focused on specific Spider-Man graphic novels, while another three examined facets of J. Jameson. Part IV looks at Spidey’s relationships with other Marvel heroes and villains, Part V ponders the role of trauma and grief in the Spidey-verse, while Part VI gives us that world through the lens of gender. Finally, Part VII features “Under-Examined Spider-Texts” – specifically, Spider-Man: The Animated Series cartoon, Spider-Man music and Spider-Man 3 game design.

With an introduction from long-time Marvel writer Tom DeFalco, Web-Spinning Heroics covers a lot of ground. And the various essays contained elements and insights that surprised even the editors.

“I think [the book] really shows that Spider-Man is one of the most richly trans-media characters we have today,” Peaslee said. “I think our book tries to live in an under-populated neighborhood where academics and non-academics can have a conversation about something in which they're both interested. That was our goal, and I think we made a good go of it.”

Peaslee noted that “compared to Rob, I'm relatively new to sequential-art scholarship, so a lot of the deep thinking on the Spidey comics and graphic novels was really impressive to me.”

Which left it to Weiner, both fan and academic, to explain the character’s importance and enduring popularity.

“Spider-Man continues to appeal to audiences today in all his various forms because like Batman, he is cool,” Weiner said. “It is interesting that [1960s Marvel Publisher] Martin Goodman originally thought the character would be a bomb and Spidey’s first story was in a comic that was scheduled for cancellation anyway. The story goes he told Stan Lee that people don’t like spiders, which is very true, so how could a superhero based on one be successful?

“He was a teen-ager who wasn’t a sidekick. He really wasn’t a team player and had all kinds of personal problems despite his powers,” Weiner continued. “But Amazing Fantasy #15 [with Spider-Man’s first story] sold and Marvel had an unexpected hit on their hands. Also, Ditko’s artwork was terrific.

“In some sense Peter Parker is the everyman,” Weiner concluded. “The superhero that could be you! All of us, at one time or another, despite however we grew up, rich or poor, have felt alienated and rejected at some point in our lives. Spider-Man/Peter Parker is one of the most ‘human’ of all superheroes. It is this human-ness and the tribulations of everyday  life he experiences that continue to make the character appealing for 50-plus years.”

And even after all that, Weiner and Peaslee still aren’t finished. Weiner, in particular, sees still more Spider-ground to till.

“One thing I was hoping for, that we never received any submissions on, related to the wider Spidey Universe of Spider-Woman, Spider-Girl – I consider Tom Defalco’s run on Spider-Girl to be one of the best comic series ever – Spider-Man 2099, cosmic Spider-Man etc.  Nobody seemed to want to write about that. I still think there is a great deal of material for scholars to mine in the world of Spider-Woman and Spider-Girl.”

And why not?  Web-Spinning Heroics II: Deadlier than the Male seems a natural.

If they are fans of Spidey, I highly doubt that.