'Annotated Sandman,' 'Batman: Black Mirror' are DC at its best

Ever since Neil Gaiman’s astonishingly literate Sandman series ran from 1989 to 1996, I’ve wanted someone to point out the cool stuff I missed. And now, with DC/Vertigo’s lavish The Annotated Sandman Volume One ($49.99), that project has begun. As should be obvious to anyone who reads comics regularly, writers from the UK make far more literary allusions than American ones. Maybe UK kids receive a more comprehensive literary education, or maybe it’s a cultural thing. Whatever the reason, it is manifestly true, and no UK comic-book writer does it more than Neil Gaiman. And even he never did it more than in Sandman, which wove together myth, folklore, literature, DC Comics and pop culture into a seemingly seamless whole that served as a backdrop for compelling (and often horrifying) stories.

This was the stuff, ahem, that dreams are made of. The Sandman series has been reprinted in a variety of formats and remains a critical and commercial bonanza, an evergreen seller for DC’s Vertigo line.

But even as I reveled in the smart, moving stories in Sandman, I was fully aware that there were aspects of the book I was flat-out missing. There were throwaway bits here and there, lurking in the background, referring to things I didn’t know about, or simply didn’t connect. They weren’t of sufficient importance that I failed to understand or appreciate the stories, but enough that I was aware of them. And I wanted to know what they were, both out of curiosity, and in case they added another layer to the already multi-layered stories. And I wasn’t the only one, which explains the existence of The Annotated Sandman. Gaiman tapped Leslie S. Klinger to do the annotations, an expert on Dracula and Sherlock Holmes, and in general an experienced hand at taking an academic approach to pop culture. It also helps that Gaiman provided Klinger the original scripts and correspondence from when Sandman was being created.

The result is a huge (12” by 12”) hardback, with page-by-page, panel-by-panel notes explaining the minutiae that is not readily apparent in Sandman #1-20. (Three more volumes will cover issues #21-75, and presumably annuals and specials). It’s in black and white, as opposed to the original color comic book, but the lack of hue doesn’t seem to hurt anything and probably prevents the book from being prohibitively expensive.

And, of course, it’s fun. Re-reading Sandman is by no means a chore, especially now that experience is enhanced by the explanations, addenda and et cetera found in the annotations. I was surprised by how much I did catch the first time around, but it’s comforting to get the rest – references to G.K. Chesterton, the English “poll tax” rebellion, Geoffrey Chaucer, and so forth. There are even references to the Erinyes – the Furies of Greek myth – that I missed the first time around, whose mention foreshadows the important role they play in the series finale.

Many books that are widely praised turn out to be a disappointment when finally read. Sandman is not one of those, and fully deserves this treatment. 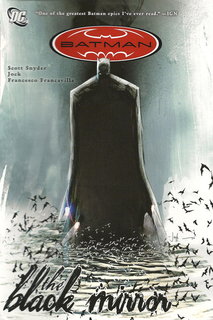 And while I’m discussing DC Comics, this is a good place to plug Batman: The Black Mirror ($29.99) by writer Scott Snyder and artists Jock and Francesco Francavilla.

Snyder made his bones with American Vampire, an ongoing Vertigo book with a clever take on bloodsucker mythology – that just happened to have Stephen King as co-writer on the first five issues! Snyder then took over the venerable Detective Comics for its final 11 issues before being re-launched with a #1 issue (along with all of DC’s other superhero books) last September.

Snyder did so well on Detective #871-881 that he was awarded Batman with the September re-launch. And it is those issues collected in Black Mirror, stories featuring an evil underworld society, a whale corpse in the lobby of a prestigious bank and former Robin Dick Grayson’s final turn filling in for the Dark Knight. It also contains, running from the start to a horrifying finish, the return of Commissioner Gordon’s possibly sociopathic son, Jim Junior.

The Batman franchise was one of the few that continued virtually unchanged through the aforementioned September re-launch, so in comic-book terms, what happens in these issues “count” in current continuity. And as you’d guess from Snyder’s Vampire origins, the legacy he leaves for Gotham City is chilling.

Black Mirror is simply Batman comics as they ought to be – no matter who’s under the mask.

I read Batman the Black Mirror this weekend. I agree with you Cap, it's a great Batman story.

The last time I reread The Sandman I kept referring to The Sandman Companion. I guess this would be a more elaborate version of the same thing. Thanks for the reminder, Cap, I just ordered a copy for the library. Hopefully it will still be here the next time I decide to reread!