When I think of how amazingly versatile comics are, I think of publishers like Archaia Entertainment. They’ve just published six graphic novels – none involving superheroes, no two remotely alike, and all of them beautifully done. 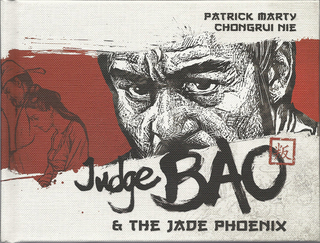 Leaping to the top of the list is Judge Bao & the Jade Phoenix ($14.95), by Patrick Marty and Chongrui Nie. Here’s the back story: Judge Bao (999-1062 CE) is an actual historical Chinese jurist famed for personal integrity and his implacable antagonism to corruption. Emperor Ren Zong gave Bao enormous powers to wander the country to root out corrupt officials and right wrongs for the peasants. Bao is a folk hero and symbol of justice in China and the many tales about him have been adapted to various media, including comics, TV and movies.

Including in France, where Marty and Nie have done a number of black and white, pen-and-ink graphic novels in a landscape format. Archaia has reprinted the first of these, and may the comic-book gods grant it’s not the last.

Marty has done a terrific job on Jade Phoenix, although I don’t know if it’s an adaptation of an existing tale or an original extrapolation. He captures the social mores, attitudes and milieu of a wealthy, burgeoning Middle Kingdom in the early 11th century. Well, I think he does, because while human nature is constant across history and geography, various societies are not – and this one is practically alien to 21st century Americans. (For example, Bao – for all that he’s the hero – sentences innocent people to be beaten with sticks who interrupt in court. And that is considered perfectly acceptable.)

One aspect that should prove familiar to American readers is that Bao’s entourage is a sort of super-team of the past. Bao is the brainy leader. Bodyguard Zhan Zhao is like Batman, in that he is master of all weaponry and martial arts; able to defeat multiple ninjas and swordsmen alike; ready to infiltrate secret meetings; capable of traveling swiftly by foot, horse or rooftop – and like Bruce Wayne, irresistible to the ladies. The team also includes a one-man CSI who is both forensic accountant and pathologist, a couple of comic-relief characters and, like most every Western or 1940s superhero, “the kid” – a sidekick that doubles not only as the reader’s POV but someone to whom Bao can explain the plot (so the readers may overhear).

But as good as Marty is, the real star is artist Nie, who makes this book absolutely unforgettable. His work is highly textured; it’s a combination of rapidograph, brush and scratchboard that is amazingly photo-realistic, yet flexible enough to stretch from action scenes to character studies to exaggerated, freeze-frame theatricality. I’ve seen a lot of comics, but few as beautiful and finely crafted as this. 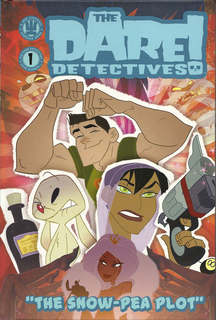 On the opposite end of the content scale is“The Dare Detectives: The Snow-Pea Plot ($24.95), by Ben Caldwell. Caldwell is a toy designer, animator, illustrator and game artist and his experience in the first two categories is on full display here.

The Dare Detectives are a trio of incompetent private sleuths in fictional Enderton City’s Chinatown, made up of a brainy, impatient Hispanic girl named Maria; a strong but childlike lummox named Toby and a snarky, anthropomorphic rabbit named JoJo. If that sounds kind of odd – and I’ll grant you the bunny – this team is actually a classic, based loosely on the Superego, Ego and Id. (Think Aqua Teen Hunger Force, the Three Stooges or even Spock, Kirk and McCoy on “Star Trek”.)

So despite what looks like a off-the-wall cast has long-established and familiar story mechanics buried in its structure that allows us to jump right into the action. And “action” is no metaphor: Animator Caldwell never allows the forward motion to slow, while still telling us everything we need to know, and providing a coherent cartoon world for these characters to inhabit. Meanwhile, you can see toy designer Caldwell in the strong, flexible look of not just the main characters, but even minor ones, like the pandas who are blue-collar henchmen for the chief bad guys, the terrier who is the team’s police contact and the Mr. Magoo-like Chinese restaurateur who is their landlord.

To be honest, “Dare Detectives” is probably aimed at younger readers. But it’s still among my top three of Archaia’s latest releases, and more important for the purposes of this review, emblematic of the publisher’s wide range of content.

I’ll be reviewing the other four books in this column or on my website, but rest assured that the only thing these books have in common is quality.