April 3, 2012: Sometimes a graphic novel arrives that is more important for what it teaches than how it entertains. Such is the case with Best of Enemies: A History of U.S. and Middle East Relations Part One: 1783-1953 (SelfMadeHero, $24.95), coming in May.

The title sounds a little like a college textbook, and sure enough, I read several books with similar titles when I was in graduate school. And, boy, I sure wish Best of Enemies had existed before my midterm in History of the Modern Middle East – it sure would have made studying easier! 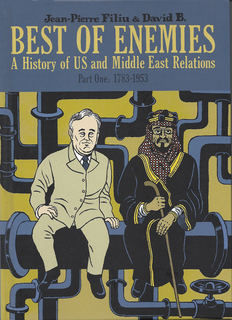 That’s because Best of Enemies breaks down a complex and morally messy history into a clean and easily absorbed narrative. It begins with the fledgling U.S. military dealing with Barbary pirates in the early days of the country (the conflict that put “to the shores of Tripoli” in the Marine anthem) and ends with the CIA orchestrating a coup that put the shah on the throne of Iran in 1953. Every U.S.-Middle East connection in between is recounted, from American naval officer Alfred Mahan coining the term “Middle East” in 1902, to FDR’s meeting with King Ibn Saud during World War II to cement the oil-for-security relationship we have with Saudi Arabia to this day.

The press release accompanying the book says the authors “draw striking parallels between ancient and contemporary political history,” but I don’t think they do (except for a whimsical prologue comparing current events to the Epic of Gilgamesh). Jean-Pierre Filiu, a world-renowned expert on the region, takes a strictly “just the facts” approach, which is rendered by graphic novelist David B. in the same clear, cartoony style he used for his award-winning Epileptic. Whatever political or historical lessons the reader derives is entirely up to him or her.

Which is not to say there isn’t plenty of meat here to chew on, even if you’re not a history buff or political junkie. In fact, our history with the Middle East is one wildly at odds with our self-image, which alone is food for thought. (We like to think of ourselves as Humphrey Bogart’s Rick Blaine in Casablanca when it comes to places like Morocco, when we’re really a lot more like Sidney Greenstreet’s Signor Ferrari.) And, yes, it’s pretty clear why Iran considers us the “great Satan” – after you see what we did in 1953, it’s a wonder they don’t hate us even more.

The only flaw, if you can call it that, is that the book focuses on U.S.-Middle East relations to the exclusion of broader history as a whole. We get a glimpse of great historical events when they directly impact on the Middle East’s relations with the U.S., but that omits huge chunks of the area’s history. For example, there’s very little mention of the Crusades; the Shiite-Sunni schism; the Ottoman Empire implosion; the formation of Israel; or England, France and Russia carving up the region for two hundred years or so. Those things inform the Middle East’s current societies, religions, governments, relationships – and especially its borders.  It makes one hope that Best of Enemies sells well enough for this team to conspire on a History of the Middle East graphic novel. 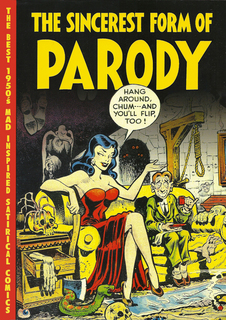 In the meantime, Best of Enemies is invaluable for the U.S., because as a country we are broadly ignorant of what our political and corporate leaders have been doing for the last 200 years in the most volatile region on Earth. It has me hoping that “Part One” in the title isn’t just wishful thinking, and that a post-1953 history is in the works.

Speaking of history, EC Comics made history in the early 1950s when writer/artist Harvey Kurtzman essentially created an entirely new genre with Mad, the satire-slash-parody in comics form. As soon as Mad made money (with the fifth issue), a host of other publishers jumped on the bandwagon, copying not only Kurtzman but his top artists, Jack Davis, Will Elder and Wally Wood. They all were canceled quickly.

Comics historian John Benson (Romance Without Tears) has collected the best stories from Mad wannabes like Crazy, Eh!, Flip, Get Lost, Madhouse, Nuts, Riot, Whack and EC’s own spinoff, Panic. But I can’t recommend this collection, The Sincerest Form of Parody: The Best 1950s Mad Inspired Satirical Comics” (Fantagraphics, $24.99), to anyone except historians, because all it demonstrates is why all these copycats were canceled quickly. In short, they were terrible.

1. Best of Enemies: A History of U.S. and Middle East Relations is invaluable to historians, students and comics fans. Courtesy SelfMadeHero.

2. The Sincerest Form of Parody: The Best of 1950s Mad Inspired Satirical Comics may be the best of 1950s Mad imitators, but it's not very good. Courtesy Fantagraphics Books.

You know, as a "comic book historian" (of sorts, I guess), I enjoyed The Sincerest Form of Parody so much that it never even occurred to me that "non-hiostorians" wouldn't like it, but I guess you're right.

I think you and I are similar, Jeff, in that we want to see old stuff regardless of quality in order to fill in gaps in our comics knowledge. So I'm glad Parody exists, and that it's on my bookshelf -- it informed me about all those Mad swipes I'd only heard about before in a comprehensive way, and I'm glad of it.

But every story that tried hard to be Kurtzman-esque just reminded me how much better the real deal was. Many of these writers aped Kurtzman's style, but mostly they just got the form right, not the content. Kurtzman's stuff held together much better than these stories, and were generally more clever. Plus, you know, he was the original, and these were echoes.

I can't see anyone outside of our niche enjoying them.