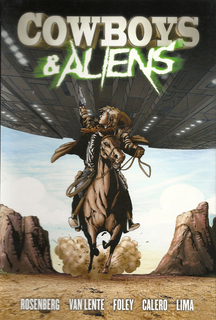 Cowboys & Aliens debuted as a standalone graphic novel from Platinum Studios in 2006 by writers Fred Van Lente and Andrew Foley, penciller Luciano Lima and a host of inkers. The story involved an expansionist alien species crash-landing in 1870s Arizona and annexing it while building a transmitter to contact their fleet to finish the job. Apache warriors, gunslingers and pioneer settlers joined forces to battle them, stealing alien equipment where they could to equal the odds.

While the thrust of the story was action, action, action, there was some social commentary too. One gunslinger remarked that the aliens had no right to conquer our turf just because they had better weapons, which resulted in a sheepish “Oh” after a stern look from the Native Americans. The “all men are brothers” theme was underscored by some cross-racial romance, as a gunslinger and a (female) alien science officer fell in love, as did a (white) female gunslinger and an Apache warrior.

None of which seems to apply to Cowboys & Aliens the movie. Starring Daniel Craig, Harrison Ford and Olivia Wilde, the film seems to take very little from the graphic novel except the name and the high concept.

But what a concept it is! It’s almost impossible to look at the GN cover, the movie posters or movie trailers and not have a thrill of anticipation. A cowboy shooting at a UFO with a sixgun? That begs the who, what, why and how response.

Which answers in part this question I hear a lot: How come Hollywood has come to rely so much on comic books as their source material? This is especially remarkable when you consider how comics were once fiercely snubbed by pop culture in general, especially the much-maligned superhero genre. For this 40-year comics reader, it’s a 180-degree turn from my youth, when I had to hide comics to avoid getting beaten up.

So what’s changed? A recent “Simpsons” episode depicted Bart explaining, “Hollywood has run dry of ideas.” While that may be partly true, I think some other things are going on here:

Movies that ignore these lessons do so at their peril. When you compare a list of the worst comic-book movies with a list of comic-book movies where the writers jettisoned or fundamentally altered the existing mythos, many names appear on both. (See: Catwoman, Elektra, Jonah Hex, etc.)

That deviation from source material is happening with Cowboys & Aliens, but here we’re talking about a single graphic novel, one which was a a fairly pedestrian take on what is clearly a cool concept. This time, the movie-makers might be right to start over.

And, honestly: Cowboys shooting at UFOs! How can you go wrong?

Comment by Captain Comics on August 8, 2011 at 10:17am
For some reason, they always come for our wimmin! (And, for the record, I agree with Lumbering Jack that the graphic novel wasn't very good.) 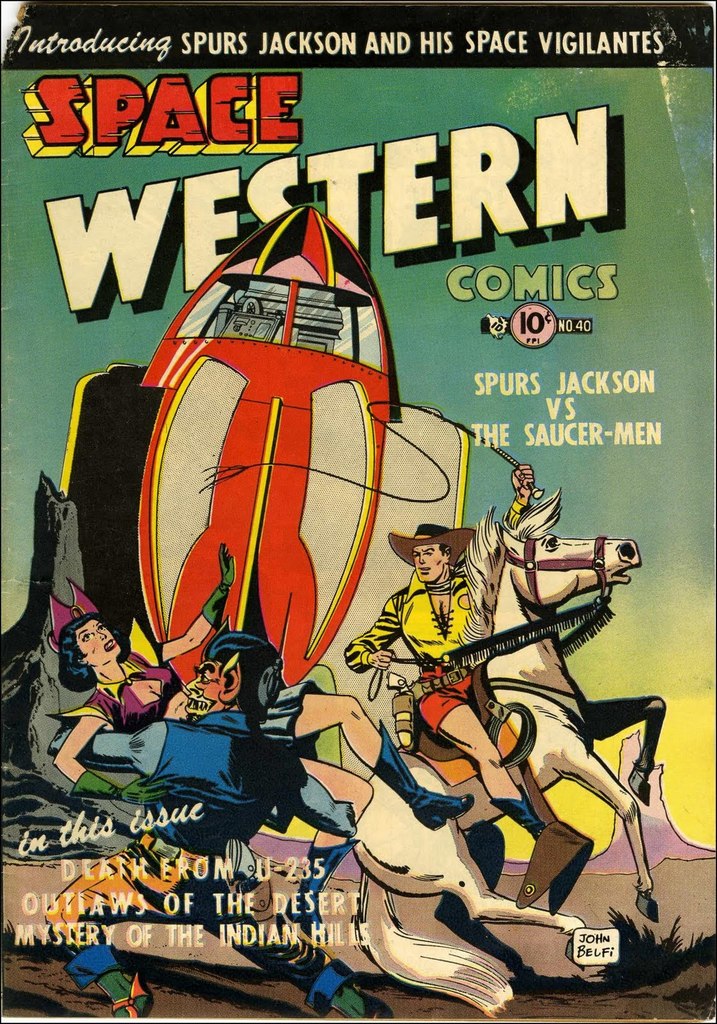 If I was John Belfi I'd sue their pants off...

Comment by Figserello on July 29, 2011 at 2:39am
How could the film not have political commentary on the wrongness of stealing other peoples' countries?  It's the first thing that comes to mind when you mention cowboys and Native Americans vs invaders.

"Cowboys & Aliens" the comic was just not good. I happened to read it about a year and a half or so ago, just prior to the big casting announcements and other pre-publicity of the film. It was clear even then that the film producers were just buying the name "Cowboys & Aliens," and nothing else.

Wasn't Platinum's whole reason for being so they could create comics that served as movie pitches? Well, they certainly succeeded!

ClarkKent_DC replied to Randy Jackson's discussion Ketchup/Catsup - Refrigerated or not
"If you want to live dangerously, and introduce the risk of growing bacteria and mold In that…"
2 hours ago

The Baron replied to Randy Jackson's discussion Ketchup/Catsup - Refrigerated or not
"Stored in a cabinet until you open it.  Once it's open, in the fridge."
2 hours ago

Randy Jackson replied to Randy Jackson's discussion How do the Wakandans mine Vibranium?
"Thanks. I guess that answers my question. "
2 hours ago

Richard Willis replied to Steve W's discussion A Cover a Day
"Another wrap-around. I don't like his Hal Jordan."
2 hours ago

Jeff of Earth-J replied to Steve W's discussion A Cover a Day
"Took down my previous post when I realized it was a dupe. Realized no posted this one yet."
2 hours ago

Philip Portelli replied to Steve W's discussion A Cover a Day
"Supergirl through the years!  (btw & IMO only, I don't think that Dick Giordano was a…"
5 hours ago

Jeff of Earth-J replied to Randy Jackson's discussion How do the Wakandans mine Vibranium?
"Here is an online explanation (one which references the comics rather than the movies)."
5 hours ago

Jeff of Earth-J replied to Dagwan's discussion What are you listening to RIGHT NOW?
"Stop Children What's That Sound - Buffalo Springfield"
6 hours ago