The first round of collections from DC’s “The New 52” initiative featured the publisher’s strongest characters and titles. Now we’re reaching a little deeper into the catalog, with much more mixed results. 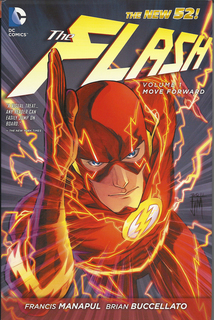 Which is not to belittle The Flash, a strong character with a strong title, whose first “New 52” collection was mysteriously pushed to November. (The rest of his Justice League colleagues, from Aquaman to Wonder Woman, have already had collections released.) The Flash Volume 1: Move Forward ($24.99) collects the first seven issues of the Scarlet Speedster’s “New 52” title and it’s a solid title.

The new Flash is police scientist Barry Allen, similar to the Barry Allen who helped launch the superhero revival of the 1960s known to comics fans as the “Silver Age.” (There were a couple of other Flashes in the ‘80s and ‘90s.) But whereas the original Barry was one of the first of the heroes who would later form the Justice League, this one seems a bit younger and a lot less experienced. The result is that this Flash is constantly learning new things about his super speed, including the novel idea of super-fast thinking called “augmented cognition,” which proves to be a mixed blessing.

That dovetails nicely with the Flash legacy; the 1960s version was forever thinking of clever and exciting new ways to use his power besides just running fast. But that Barry carried the reputation of being boring, whereas the new one has more mystery, a bit more personality and a much more complicated love life.

All of which grabbed me. What didn’t was the fairly pedestrian superhero aspects of the seven issued included in Move Forward, where the Wizard of Whiz battled a multiplying man named Mob Rule and upgraded versions of traditional Flash foes Captain Cold and The Top (now called Turbine). It’s strange for this old superhero fan to say, but I’ll be back not for the super-speed antics, but for the lingering mysteries about Barry’s past, the fate of his father and how his current romantic triangle will resolve.

Speaking of Justice League members, one of the early “New 52” collections was Green Lantern, which was terrific. But initially I had intended to ignore the three other Green Lantern-related titles, until I discovered all four titles will be required reading for a major event in 2013 called "Rise of the Third Army." So I picked up Green Lantern Corps Volume 1: Fearsome ($22.99), Green Lantern – New Guardians Volume 1: The Ring Bearer ($22.99) and Red Lanterns Volume 1: Blood and Rage ($14.99) – and discovered my first instinct was the right one.

Red Lanterns was actually boring! The supposedly terrifying Red Lantern leader Atrocitus spent all the issues in this collection wandering around a deserted planet talking to himself, trying to decide what to do. In short, here’s a big, bad supervillain playing Hamlet.

New Guardians is the best of the bunch, with solid art and writing. The problem is that it must, perforce, spend much of its time figuring out a reason to exist. The book is predicated on representatives of the Blue, Green, Orange, Red, Sapphire, Violet and Yellow Lantern corps hanging out together, when they have no convincing reason to do so. Also, the book leads up to the introduction of a Big Bad named Invictus who is supposed to be awesome, but is actually kinda dull and derivative of much better cosmic villains. Plus, his supposedly majestic headquarters looks like a tinkertoy on steroids.

Meanwhile, Justice League Dark Volume 1: In the Dark ($14.99) was a fun book whose concept is to team up supernatural characters to fight magic-based threats that the “regular” Justice League is ill-equipped to battle. The team includes a lot of fan favorites, consisting of Deadman, Enchantress, John Constantine, Madame Xanadu, new character Mindwarp, Shade the Changing Man and Zatanna. But as much as I enjoyed the fast action, quirky characterization and creepy magic stuff, I had hardly put the book down before I realized that nothing had actually happened!

This collection of six issues was nothing more than one of the team-to-be gathering five other members of the team-to-be to fight the seventh member of the team-to-be, who had gone nuts. While that’s all well and good, it takes an awful long time to achieve very little, and writer Peter Milligan doesn’t even get around to introducing someone else for them to fight until the last panel of the last page. As stories go, that’s a pretty lengthy – and expensive – prologue.

2. If Red Lanterns Volume 1: Blood and Rage is building to anything, it's taking its time. Copyright DC Comics

5. Justice League Dark Volume 1: In the Dark uses up all its space giving this team a reason to exist. Copyright DC Comics

I've already made my feelings known about Red Lanterns a few times.

The Flash was a pleasant surprise for me. I didn't plan on buying it initially, but picked up the first issue during a light week for me, and I really liked it, and have liked it quite a bit. Also, I think Manapul's art is just great.

Jeff of Earth-J replied to The Baron's discussion Movies I Have Seen Lately
"Nor these:"
5 hours ago

Jeff of Earth-J replied to Jeff of Earth-J's discussion Swamp Thing
""He also says he’s been there before, hinting that he was reincarnated." Alec does…"
5 hours ago

Jeff of Earth-J replied to Jeff of Earth-J's discussion Swamp Thing
""Who was later known as Louise 'Weezie' Simonson." Artists frequently use…"
5 hours ago

Richard Willis replied to The Baron's discussion Movies I Have Seen Lately
"Not these guys?"
6 hours ago

Richard Willis replied to Jeff of Earth-J's discussion Swamp Thing
"ANNUAL #2: Swamp Thing uses his newly discovered abilities to go "Down Amongst the Dead…"
6 hours ago

Richard Willis replied to ClarkKent_DC's discussion The New Season (2021)
"ClarkKent_DC said: The rampant housecleaning at The CW makes me wonder what's going to be left…"
8 hours ago

Jeff of Earth-J replied to The Baron's discussion Movies I Have Seen Lately
"THE THREE MUSKETEERS: I first saw this 1973 film with its 1974 sequel in 1975 as a double feature…"
9 hours ago