There’s nothing an ink-stained wretch like this reviewer can add to the poignancy and lyrical beauty of Oscar Wilde’s stories. Fortunately, there’s plenty legendary artist P. Craig Russell can add, as he does in The Fairy Tales of Oscar Wilde Volume 5: The Happy Prince (NBM, $16.99). 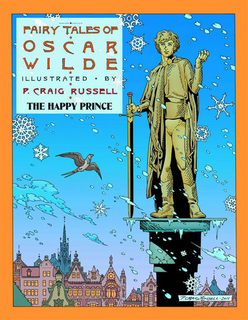 The award-winning Russell is famed for his beautiful, Raphael-esque artwork, on display in his stunning adaptations of Wagner’s Das Ring die Nibelungen, Mozart’s The Magic Flute and Strauss’s Salome. Russell has even managed a superhero or two, including Marvel’s Killraven and Dr. Strange.

The downside to Russell’s classical style is that it takes a lot of time. As he explains on his text and video blog (nbmpub.com/blog/author/craig-russell), “The Magic Prince” has been staring at him accusingly from beside his art table for eight years, while other projects have taken precedence – and because Russell’s perfectionism wasn’t happy with his initial efforts.

It was well worth the wait. As usual, Russell’s art is transcendent, transporting the reader to a world where even trash dumps have their own textured, fine-lined beauty. And those things that are supposed to be beautiful fairly glow, as if painted in layers of oil like the Old Masters Russell resembles, and not merely ink and watercolor on paper.

Then there’s the story itself, a classic of long standing. Wilde’s tale is that of a “Happy Prince” who was a royal lad who led a life of ease and indolence before dying young. The prince’s spirit now resides in his own gold- leafed and gem-embroidered statue on a tall steeple, where he can see the wretched poverty of his people for the first time. He cajoles a barn swallow into denuding him of his riches and distributing them to the needy, with dire consequences for them both. I won’t spoil everything here, but I will note that this story of heroic altruism and the gap between rich and poor is of special relevance today, where it’s reflected in the Occupy Wall Street movement and presidential politics. 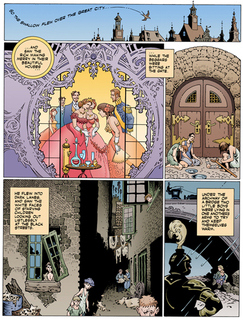 Russell’s work speaks for itself, but there is one thing I can add: Go look for yourself, and see if The Happy Prince doesn’t convince you to take him home, where his message can enrich all who hear it.

Ever hear about something all your life, but not understand it until you experience it firsthand? Such was the case of Modesty Blaise for me, a comic-strip character from England whose appeal I didn’t understand until I read a collected volume.

Modesty Blaise: Live Bait ($19.95) is the 21st and latest volume in the reprint series by Titan Books of England, with a 22nd due in August. Prior to reading it, the times I’d run across Modesty (a few reprints by Eclipse in the ‘80s, a couple of movies) had not impressed me. After reading it, I gained a newfound appreciation – and an understanding of why this character has lasted since 1963.

The premise is fairly simple: Modesty was a war orphan who survived (and prospered) as a criminal, until marrying (and divorcing) an English lord. (If this seems familiar, writer Chris Claremont lifted parts of Modesty’s story for the origin of the X-Men’s Storm.) Once legitimatized, she retired from the criminal life and now uses her hard-won skills and connections (with the criminal organization she used to head, “The Network”) for the English crown (on occasion) and to help out old friends (more often) and those in need (most often). She is always assisted by Willie Garvin, another ex-crook with whom she has a platonic relationship based on mutual respect. 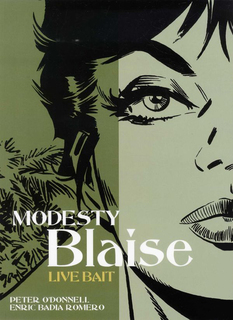 It’s a nice set-up for adventure, but nothing obviously special – until you read the actual stories. I was intrigued by Live Bait (which includes two other stories, “Samantha and the Cherub” and “Milord”), because of the verisimilitude provided by writer Peter O’Donnell. Modesty’s world is a harsh one, despite it being a comic strip, which deals frankly with subjects like child-kidnap, snuff films and sexual slavery, while utilizing a wide array of real-world (albeit often exotic) weapons, techniques and spycraft.

Naturally, Modesty is sexy and gorgeous. But artist Enric Badia Romero doesn’t exaggerate her charms; like her adventures, Modesty is exciting but believably proportioned.

It is that patina of plausibility that makes Modesty Blaise so much fun. Her adventures seem genuinely dangerous, and rarely have a completely happy ending. Modesty may win the day, but there are always consequences for playing rough.

I've only read a handful Modesty Blaise stories, but it's the best realistic-style adventure strip I've read. Most of the strips I've seen were drawn by the original artist, Jim Holdaway, whose work was as good as I can imagine art for this kind of strip being. Romero was his first successor, but he left the strip for a period in 1978-86, during which he drew an SF strip called Axa.

The opening sequence established that Modesty obtained British citizenship through a marriage of convenience to an alcoholic in Singapore. It may be that O'Donnell established he was a lord in a later sequence - I couldn't say - but it's not indicated in the initial storyline.

Peter O'Donnell died in 2010. He wrote about his writing career, including the other strips he worked on, at a website here.

[L]ike her adventures, Modesty is exciting but believably proportioned.

I'm watching the 2003 Modesty Blaise film My Name is Modesty. According to Modesty's origin story she took her surname from Merlin's tutor in Le Morte d'Arthur, and I've long wondered why Peter O'Donnell named her after him. I just realised he really chose the name for its sound; "Blaise" sounds like "Blaze".

I came at it from the opposite direction, Luke, so your latter discovery was all I knew. That is to say, I heard the name verbally first, and assumed it was "Modesty Blaze" until I saw it in print. Then I wondered about the odd spelling, but wrote it off as a British thing. Nice to know it means something!