The teetering tower of review copies has yielded a bumper crop of historical goodness. Let’s take a look chronologically:

* Taxes, the Tea Party, and Those Revolting Rebels (NBM, $14.99) is a history textbook disguised as a graphic novel, much along the lines of Larry Gonick’s Cartoon History of the Universe and Michael Goodwin’s Economix: How Our Economy Works (and Doesn’t Work) in Words and Pictures. Like those two books, Taxes makes history fun and memorable by using cartoon characters to explain and propel the narrative. 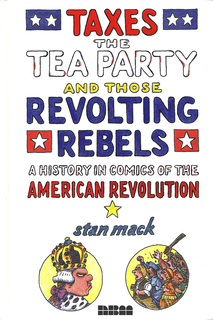 That narrative runs, roughly, from the early 1760s to 1789, bookended by the Writs of Assistance (the first of King George’s onerous tax burdens on the American colonies to help pay for the Seven Years’ War) and the adoption of the Bill of Rights. In between we get the Boston Tea Party, the Declaration of Independence, the Revolutionary War and the election of George Washington.

Taxes is written and drawn by Village Voice cartoonist Stan Mack, who has created other historical graphic novels, including The Story of the Jews: a 4,000-Year History. Taxes is information familiar to every schoolchild, but it’s especially important in today’s political climate – where both parties frequently invoke the Constitution – and brought to life by Mack’s irreverent (albeit accurate) approach, which knocks our Founding Fathers off their pedestals. You really can’t get any more American than that.

* Americans tend to think of the Japanese enemy in World War II as implacable, fanatical, faceless and terrifying. A new graphic novel by one of Japan’s most celebrated manga artists shows the truth behind the (Western) legend.

Onward Towards Our Noble Deaths (Drawn & Quarterly, $24.95) follows some new recruits in a Japanese company on New Britain in what is now Papua New Guinea, from their arrival in 1943 to their deaths in 1945. I guess that’s a spoiler of a sort, but really, you don’t expect any other outcome when you experience these soldier’s daily lives – physical abuse from their superiors, starvation, irrational orders and more. And their deaths are due entirely to a culture we barely understand; when 81 soldiers miraculously survive a suicide attack, their commanders send them back on a second suicide attack to avoid losing face (and force several officers and NCOs to suicide). 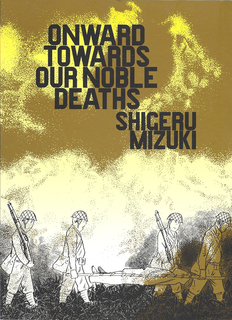 Deaths is written and drawn by someone who knows this story, because he lived it. Writer/artist Shigeru Mizuki, now 90, is not only one of Japan’s most celebrated manga artists, but a veteran of World War II, which claimed one of his arms. And the only reason he survived is because he was hospitalized with battle injuries and malaria when his company was sent to its death.

Deaths may prove strange to American eyes for reasons aside from content. For one thing, Drawn & Quarterly opted to present it as it originally appeared, which means reading back to front, right to left. Secondly, Mizuki is one of the founders of the manga style that draws realistic backgrounds with cartoony human characters – who revert to a grotesque, photo-realistic depiction in death.

Both of those roadblocks evaporate fairly quickly, given the story’s lively pace, rough humor, endearing characterizations … and suffocating sense of inevitable doom. 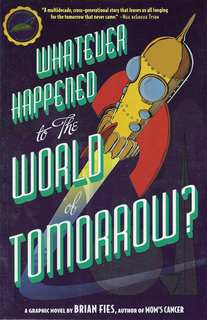 * Baby Boomers like to joke about how the future predicted when they were children, complete with flying cars and personal jetpacks, failed to materialize. Writer/artist Brian Fies (Mom’s Cancer) decided to tackle the topic directly.

Whatever Happened to the World of Tomorrow? (Abram ComicArts, $14.95) is much, much more than a one-joke premise, though. It uses a father-son pair in five different decades to explore what each generation expected of the future, plus how the generation gap played itself out. Fries also includes a great deal of history about science fiction through the years, supplemented by comic-book stories starring “Captain Crater and the Cosmic Kid” rendered in different styles to reflect different eras of comic books.

That’s a lot of information packed into a small space, but Fries has a breezy, cartoony style reminiscent of Bill Watterson (Calvin and Hobbes) that makes it painless. And, despite some friction (the 1970s father-son relationship) and bad news (the abandonment of the U.S. space program), Fries provides a happy ending – one last chapter depicted an idealized future like the one we once dreamed, one in which the father and son have finally grown older, with the son having a child himself. That child is a daughter – the book’s first significant female character – implying that gender equality is one more benefit the future will bring.

Sappy? Maybe. But hoping that tomorrow will be better than today is all that really keeps us going sometimes. World of Tomorrow is that hope personified, a love letter to the future from the present – and many of our pasts.

3.  Whatever Happened to the World of Tomorrow? explores what we've expected of the future from the 1930s to the 1970s. Copyright Abrams ComicArts.

Oh, man, I loved Onward Towards Our Noble Deaths. A great read for sure. The art was really something, because outside of the humans the level of detail in everything else is just amazing. The foliage, animals, war machines, etc. When I get a chance I should re-read it.

I have all the Big Books, and that's one of my faves, too!

I have to brag that I would have guessed Tesla. But I probably would have missed everything else!

Strangely, Tesla is enjoying a mini-renaissance in comics right now. I remember him being a player or name-checked in Hickman's SHIELD, in Atomic Robo, in Tom Strong, and a couple of others I'm not remembering right now. He's still often played as something odd or dangerous -- Edison's smear job still at work -- but I think eventually he'll get the credit he deserves.