How to Remember You're a Tarzan fan

The legendary Ape-Man first saw print100 years ago in the pulp title The All-Story Magazine, and Titan Books is celebrating with a gorgeous hardback, Tarzan: The Centennial Celebration ($39.95). Written by Scott Tracy Griffin, one of the foremost Edgar Rice Burroughs experts extant, Centennial covers aspect of the fabled adventure hero from print to movies and everything in between.

To tell you the truth, I never considered myself much of a Tarzan fan. For one thing, when I became old enough to become aware of the world, the idea of white guy being better at everything in Africa than the black people who lived there began to feel a little uncomfortable. And for another, let’s face it: The idea of jungle adventure wasn’t terribly exciting after space exploration made jungle tales a trifle stale, after automatic weaponry made death by lion far-fetched, and after satellite surveillance made lost civilizations implausible. 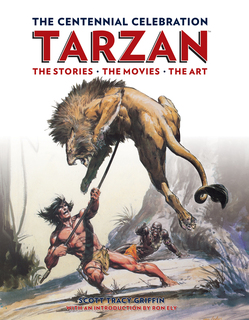 But as I read this book I realized that there’s a reason why Burroughs is referred to as “the grandfather of science fiction.” While he was preceded by Mary Shelley, Jules Verne, H.G. Wells and many others, it was Burroughs whose wildly popular Tarzan of the Apes, John Carter of Mars and David Innes of Pellucidar made science fiction and/or fantasy part of the tapestry of pop culture. Tarzan isn’t just an adventure character; he informs every character that came after him, from Buck Rogers to Superman, and created the atmosphere in which other characters came to exist. He is the air other characters breathe.

Which is why, I realized to my own surprise, I’d absorbed so much Tarzan over the decades. As a child I’d slavishly watch whatever Tarzan movie (usually starring Johnny Weissmuller or Lex Barker) the local CBS affiliate would schedule after the cartoons every Saturday. In middle school I inhaled all 24 Tarzan novels, which were being re-released as paperbacks.

And there were the comics! I wasn’t born yet for the Dell Tarzan comic books (1940s and ‘50s) and missed out on the Gold Key run (1960s), but I’m snatching up hardcover collections of those books as fast as Dark Horse prints them. And I managed to collect all the later comics based on Burroughs characters, from DC (1970s), Marvel (1980s) and Dark Horse (1990s to present).

But even so, there’s tons of Tarzan I didn’t know about, an itch this book thankfully scratches. Griffin gives a chapter to each to the novels, along with sidebars on various aspects of Burroughs and his Ape-Man, from how Burroughs pronounced his hero’s name (TAR-zn), to “How to Speak Ape,” to the history of the legends of dinosaurs in Africa that informed the lost land of Pal-ul-don in Tarzan the Terrible. Roughly the second half of the book is individual chapters on Tarzan in comic strips, comic books, radio, TV, movies, collectibles, conventions and the many other facets of the Ape-Man and his creator.

All of this info is lavishly illustrated with book covers, frontispieces, movies stills and other art, both familiar and scarce, that is simply arresting. The illustrations alone are worth the price of admission, from familiar names like Neal Adams, John Buscema, Frank Frazetta, Joe Jusko, Joe Kubert, Roy Krenkel, Russ Manning, Jesse Marsh, J. Allen St. John, Boris Vallejo and George Wilson, to new favorites like Phil Normand and Robert Abbett. And where else are you going to see so many pictures of Weissmuller and Maureen O’Sullivan in loincloths?

This book will remind those of us, like me, just how much we have always loved Tarzan. Here’s to another 100 years, Lord Greystoke!

Another fond look back at an American institution comes in the form of The Art of Betty and Veronica (Archie Books, $29.99). And, while I enjoyed the cheesecake in this glossy hardback as much as any heterosexual male, that’s not what I found to be most interesting – which is the history of the characters.

As I’ve written in my many reviews on my website of Dark Horse’s “Archie Archives” (which is reprinting the Riverdale gang’s stories chronologically), the girls in the early Archie strips were drawn relatively realistically, whereas the boys were all cartoons from the get-go. We see that here, and then experience the girls’ permutation into cartoon characters themselves.

And there are a lot of versions! Archie has always relied on a “house style,” wherein most artists work in the style of the firm’s designated superstar. Early Archie Comics all emulated the style of the first Archie artist (and likely creator), Bob Montana. When I was reading Archies regularly in the 1970s, Dan DeCarlo’s style – and his utterly gorgeous B&V – dominated.

And those two artists are, indeed, represented here. But Archie Comics has had a lot of wonderful artists, many of which are spotlighted here, including Al Fagaly, Harry Lucey, Samm Schwartz and even Flash artist Irv Novick. DeCarlo gets the lion’s share of pages -- as he should – but near the end you get some current artists, including DeCarlo protégé Dan Parent.

There’s not a lot of behind-the-scenes anecdotes or historical data in The Art of Betty & Veronica, but what the title promises is what the book delivers. We can fill in the blanks ourselves, as we pour over page after page featuring America’s sweethearts in everything from bikinis to Parisian haute couture.

Or, as the girls themselves say in a famous gag: “Betty, do you think short skirts make girls look taller?” “No, but it makes boys look longer!”

David Innes. Neil Innes was one of the Rutles.

I flipped through that Tarzan HC when it shipped, but I hadn’t pre-ordered it (and it shipped on an unusually heavy week, IIRC), so I didn’t buy it. I plan to someday, however. Glad to hear it’s just as good to read as it is to look at. Judging from the title of this post, I thought you might have been referring to the first volume of Dark Horse’s Russ Manning Tarzan series which shipped recently. It features Manning’s faithful adaptations of the first five or six ERB novels in a row. If Jesse Marsh is an acquired taste, I don’t know anyone who doesn’t appreciate Manning’s clean, crisp style. This stiff has been reprinted, by Dark Horse, before, in three smaller “digests” with cover art by Mark Schultz, but I couldn’t pass the single edition HC.

Roy Thomas and Tom Grindberg are currently doing a subscribers only online Tarzan Sunday strip for an Edgar Rice Burroughs, Inc. website, here. I can't subscribe myself (I can't currently pay for stuff online), so I'm afraid I can't say if it's worth a look. Interviews with preview art appeared here and here.

The Tarzan book sounds very interesting.The artwork alone should make this one worthwhile. I read a fair amount of ERB as a kid and have picked up omnibus editions of various works in recent years and I will read one of the novels when the mood strikes. It seems to me interest in Tarzan began to wane in the Seventies. Up until then there was still a new motion picture every few years, the newspaper strip was going strong, there were two seasons of the network TV show and the Burroughs books were everywhere paperbacks were sold.

I have always had a question or two about Tarzan that I haven't ever had a chance to ask...

Back in the 1990s, Malibu Comics grabbed the rights to Tarzan for a period and came out with a comic that suggested that Tarzan and Jane were now immortals, having discovered a youth serum or something like that.

This allowed Tarzan to keep his "old world" mindset while battling modern villains.

Now I am sure this is not canonical in the least, but two (well, three) questions arise:

Does Tarzan "live" in modern times? What time period are his stories set?

How did ERBophiles react to the concept of an immortal Tarzan as presented by Malibu?

Regarding the time-period, the present day, I think. Burroughs involved Tarzan in the First World War in Tarzan the Untamed and in the Second in Tarzan and the Foreign Legion.

When Roy Thomas wrote Tarzan comics for Marvel he set the stories in the past. I can't remember exactly how he pinned it down; it was some time in the first half of the century.

Spoiler warning for two of Burroughs's later Tarzan novels. Apparently Tarzan's Quest involves an immortality drug. I checked the book's conclusion; it has Tarzan and his companions in possession of the drug but leaves open whether the characters will actually take them. In Tarzan and the Foreign Legion ch. 25 Tarzan tells a story about how a witch doctor performed a ritual to give him perpetual youth after Tarzan saved his life. It's implied the ritual worked, but the issue is left slightly open. (It's indicated Tarzan looks much younger than his age, but when he's asked "Do you expect to live forever?" he answers "I don't know what to expect.") He also says that those who took the Tarzan's Quest drug have since shown no sign of aging, but doesn't say who did other than "a little monkey", meaning Nkima. The chapter concludes with him saying that he expects death will get him some other way. I learned of these passages from Wikipedia. (The books are in the public domain in Australia, so I was able to check their texts at Project Gutenberg Australia.)

My recollection is Philip Jose Farmer's Tarzan Alive represents Tarzan as having taken the drug and as having given it to his family. But I don't remember the passage well (and I haven't read most of the book).

For the record, the Malibu series were Tarzan the Beckoning (7 issues) and Tarzan the Warrior (5 issues).

One thing I learned from this book is that Charlton once thought Tarzan had fallen into public domain, and published four issues in 1965 by Joe Gill and Sam Glanzman. ERB quickly put an end to the series, but Dark Horse is releasing them as The Unauthorized Tarzan in April!

I received Tarzan:The Centennial Celebration for Christmas. Only had a few moments last night to flip through it, but what I saw was most impressive. If you are a fan of Tarzan or ERB, this one should be on your "must have" list.