NBM has winners with both 'Inner Sanctum,' 'Salvatore 2'

The Golden Age of radio is a nearly forgotten era, which makes it all the cooler that writer/artist Ernie Colón has brought it back in graphic novel form. 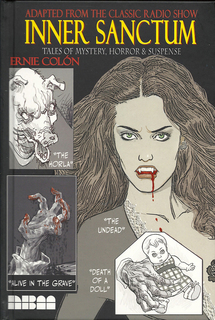 Inner Sanctum: Tales of Mystery, Horror and Suspense (NBM, $16.99) is a collection of stories adapted from the old radio show in glorious black and white. If you’ve ever listened to Inner Sanctum, you might recognize "Alive in the Grave,” about premature burial. Or “Death of a Doll,” the great-grandfather of the Chuckie movies. Or “The Horla,” about a concert pianist who fears a beast only he can see. Or “The Undead,” a vampire tale with a twist. Colón also throws in a story of his own called “Mentalo,” about a magician who does real magic – and pays a heavy price.

I actually heard some Inner Sanctum episodes growing up, repeats on a radio station I could only hear late at night. (It was probably WLS-AM in Chicago, but not knowing made it more mysterious.) I don’t remember if the specific stories in Colón’s book were among the ones I heard, but I can say they are representative of the show.

Which are also representative of an entire genre that fans of the fantastic know well: The moody suspense tale with a twist ending – usually, but not always, delivering vengeance from beyond the grave upon some deserving miscreant. Inner Sanctum falls into the continuum of horror series that include EC’s 1950s horror comics; Warren Publishing’s 1960s-70s horror magazines; and TV’s Night Gallery and Twilight Zone. It’s a popular genre, because it delivers the goods.

As does Colón, one of my favorite artists. Colón has tackled just about everything in comics, not just the usual superheroes, but children’s books (Richie Rich, Casper the Friendly Ghost), horror (Creepy, Eerie), fantasy (Amethyst, Princess of Gemworld), historical adventure (Arak, Son of Thunder), humor (Damage Control) and even non-fiction graphic novels (The 9/11 Report, Che: A Graphic Biography). Strangely, I think it’s the hints of the kids’ books that make his work so memorable to me: His lines are clean and his backgrounds uncluttered, like a Richie Rich book -- a hint of childhood innocence that makes the horror of his adult stories all the more pronounced. Whatever the reason, Colón’s work always has a vibrant verisimilitude, informed by a sort of universal experience, that makes it very immediate and accessible.

Which means he can scare the pants off you. I highly recommend Inner Sanctum, which ought to come with a reinforced belt.

Also from NBM this month is Salvatore Vol. 2: An Eventful Crossing ($14.99), which has turned me 180 degrees on this offering from French artist Nicolas de Crécy. 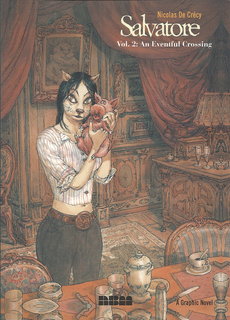 The first book of this anthropomorphic story introduced us to a fondue-eating canine mechanic who was building a land-and-seaworthy vehicle to travel to find his lost love in South America, accompanied by a mute, tiny homunculus; a porcine mother who’d lost one of her litter in the sewers of Paris; and a feline, female teen Goth, who found and adopted the (intelligent?) piglet as a pet. We met the mother pig when she was at the dog’s shop (and he was ripping her off), whereupon she somehow ended up on a plane’s wing in flight in a sort of slapstick Buster Keaton sequence, while the Goth chick was … you know, I don’t remember. It all seemed rather non sequitur to me. This world seemed arbitrary and inconsistent, with some animals wearing clothes and others not; the various threads of story didn’t seem to go anywhere; the only human was inexplicably tiny and mute; and so forth.

But, as I said, An Eventful Crossing has changed my mind entirely. All the stories are progressing dramatically and are holding my interest, and what I interpreted as inane, random dialogue in the first book has transformed into solid (and funny) characterization. I’m still baffled by the tiny little assistant mechanic, but he shows spunk and personality in this book, simultaneously revealing that he is essentially a child (despite his Coke-bottom glasses, business suit and male pattern baldness).

I was wrong to dismiss this book as an artist’s self-indulgence, and hope now to correct my error. Salvatore is initially hard to embrace, because it is a story that refuses to conform to expectation and classification. But it’s that very quality that’s making it a unique and entertaining read for me now.