Rick Geary asks: Were Sacco  and Vanzetti murderers or victims?

Aug. 16, 2011 -- Like most Americans, I first heard about the Sacco and Vanzetti trial in eighth-grade American history class. But it took Rick Geary’s new graphic novel for me to really learn about it. 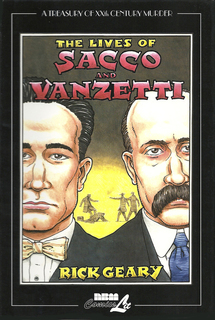 In case you slept through eighth grade – and I know some who did – Sacco and Vanzetti were two Italian immigrants who were executed in 1927 for a crime they probably didn’t commit. They were genuine, card-carrying anarchists, and the crime, a payroll robbery with brutal fatalities, was committed by anarchists. Or at least some people who looked like some people who were thought to be anarchists, which seemed to be enough for a jury (and a judge who was openly and publicly prejudiced against them).

But there’s that word “probably” dropping in all through this brief bio, because the trial was such a farce and the evidence so tampered with that it’s impossible to tell then or now if they were involved, or weren’t involved but knew the true criminals, or were just unlucky enough to be anarchists and immigrants at a time when public hysteria over anarchism and immigration was at an all-time high.

All of which is brought to vivid, black-and-white life by Rick Geary’s The Lives of Sacco and Vanzetti (NBM ComicsLit, $15.99), part of Geary’s “Treasury of XXth Century Murder” series. I’ve raved about Geary’s work before; not only his appropriately old-fashioned, woodcut-style, pen-and-ink artwork, but also his painstaking research and objectivity. This book is one of his best, a riveting and thorough documentary that leaves readers fully informed of all the evidence, pro and con, as if they were on a jury in a trial more just than the real one.

Did they do it? Geary doesn’t offer an opinion, and neither will I. Read Sacco and Vanzetti yourself and make up your own mind. While you’re there, you might ponder if this era of political tumult has anything to teach us about our own.

Another excellent addition to the bookshelf is the twenty-first volume in Eureka’s Graphic Classics series, Edgar Allan Poe’s Tales of Mystery ($17.95). The very first Graphic Classics volume featured Poe, focusing on his horror stories, while this one emphasizes his mystery and detective work.

In fact, if you know anything about Poe, you know he wrote what are considered the first detective stories, one in particular starring an observational sleuth who was almost certainly the inspiration for Sherlock Holmes. That story is “The Murders in the Rue Morgue,” and it dutifully leads this volume, adapted by Antonella Caputo with some lovely period artwork by Reno Maniquis.

“Rue Morgue” is the longest of the offerings in this book, which is filled not only with short stories, but also poems that I haven’t read since I was a Poe freak in junior high, and have never seen adapted to comics before. There are also a couple of new adaptations of stories Graphic Classics has adapted in other volumes, but one never tires of “The Masque of the Red Death” or “The Tell-Tale Heart.” Especially this version of “Heart,” which stars a modern tatted-and-pierced female as its maddened narrator.

Also, Poe’s fixations on premature burial, consumptive illness, madness and macabre romantic impulses are well known, and in full display here.  But it’s the obscure “Berenice” – with a bizarre subject I will not spoil for you here – that takes the prize for weirdness.

A third book made my must-get list, a collection of work by comics legend Will Eisner that has never been reprinted before. It’s amazing to discover that there exists any work by Eisner left untouched to date, but it’s true: Between 1951 and 1971, Eisner produced 227 issues of an Army training manual. Now we get to see some of that work thanks to P.S. Magazine: The Best of The Preventive Maintenance Monthly (Abrams ComicArts, $21.95).

True to form, Eisner made this potentially dull material a delight. He peopled it with a cast of his own creation, including savvy pin-up Connie Rodd, perpetual foul-up Joe Dope and the punny Sgt. Half-Mast McCanick.

But there’s also a clue why it’s been left fallow so far. As you peruse these excerpts, it’s easy to imagine how Eisner’s WWII perspective began to fall flat for later generations, especially during Vietnam.

But it’s still Eisner, so it’s not only fine work but historically important. P.S. is going up on my shelf next to “The Spirit” and A Contract with God.

The Lives of Sacco and Vanzetti explores thoroughly what is known about this legendary trial. Courtesy NBM ComicsLit.

Comment by PowerBook Pete, the Mad Mod on August 20, 2011 at 8:41pm
Are the West Memphis 3 a modern-day Sacco & Vanzetti? Well, they weren't executed, at least.

Comment by Captain Comics on August 20, 2011 at 9:06pm
My wife is of the opinion that they were innocent, but railroaded because they were poor, stupid and dressed funny. If true, the analogy might hold up.

Comment by Travis Herrick (Modular Mod) on August 22, 2011 at 12:15pm
Well I know we didn't learn about Sacco & Vanzetti in 8th grade. That was US History I which ended around the Civil War. Anyways I really like those Geary books, but I always seem to miss them when they first come out. Frustrated at myself really.

...Your post's top copy at least seemed to me to be leaning towards saying that Geary's book leans to the " They did it . " side , though , analysing what you wrote , maybe technically you don't say that...