Ever wonder why you know so many Yiddish words, fellow goyim? I know I have – I’ve used words like putz, schmuck, klutz and schnozz most of my life, without any idea where I picked them up. Was it from MAD magazine? The Marx Brothers? Fiddler on the Roof? Stan Lee (Stanley Lieber) and Jack Kirby (Jacob Kurtzberg) at Marvel Comics? Blazing Saddles and other Mel Brooks movies? 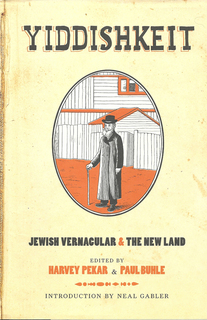 It could have been any or all, because American entertainment is thoroughly suffused with the sensibilities of Yiddish-speaking Jews, a people who fled pogroms in places like Poland and Russia to the New World. These gentle folk from the rural villages of Eastern Europe had a unique viewpoint and wry sense of humor that was embraced in cultural meccas like Hollywood and New York City. From there, they taught boys from Tacoma to Tampa to want to be a mensch, and girls to want to be zaftig.

Which is why I have always wanted a book like Yiddishkeit: Jewish Vernacular & the New Land (Abrams ComicArts, $32.95). Edited by Paul Buhle and the late Harvey Pekar, Yiddishkeit traces the history and influence of Yiddish from medieval Europe to the tenements of New York’s Lower East Side through a collection of comics stories.

It’s more than just a history, though, because Yiddishkeit is a sprawling, untranslatable concept that embodies a language, a culture, a set of values, a way of thinking, a sensibility. Sure, we learn a lot of historical facts in Yiddishkeit,but if you don’t feel what the words and pictures are conveying, you’re missing the best part.

And there’s probably nobody better for this task than Harvey Pekar, famed for his American Splendor comic books and movie, and the Our Cancer Year graphic novel. Pekar’s relentless perfectionism and irritable kvetching are as much a reflection of Yiddishkeit as the funny stuff, and his stamp is all over the book, especially in the pieces he wrote. Pekar died in 2010, and Yiddishkeit is probably his last sustained professional effort.

Comics fans will recognize other names as well, including Danny Fingeroth (a long-time Spider-Man editor), Peter Kuper (The Jungle, among others) and Spain Rodriguez (Trashman, Che: A Graphic Biography). Plus there’s co-editor Buhle, who’s written 42 books, several about the intersection of Jews and comic books.

From these diverse – and all-star – hands arises Yiddishkeit, felt more with the heart than understood with the head. Which is itself reflective of the Jewish experience, and its influence on America.

So don’t be a schmoe! Get off your tukhus and buy Yiddishkeit already! 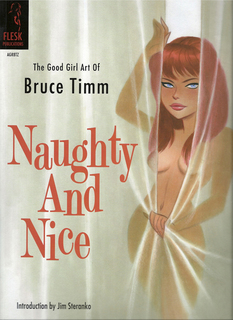 "Good girl art” is a comic-book term that really means “good and sexy.” Which gives you an idea what’s in Naughty and Nice: The Good Girl Art of Bruce Timm (Flesk, $50).

Another delightful aspect of the book is that DC Entertainment has allowed Timm to include a number of (fully dressed) heroines from their comic books, some of which Timm has personally re-invented for the small screen. So you’ll see Batgirl, Poison Ivy, Catwoman and other Bat-characters, plus a great many DC supergirls we’ve never seen him draw before.

A further interesting angle is that Timm is clearly not a fan of the exaggerated busts so typical of comic books. His girls are all petite. Even when dealing with notoriously top-heavy characters like Power Girl and Big Barda, he keeps the hip-waist-bust ratio plausibly proportioned.

I confess that after a while a lot of these pin-ups – all of the same body type, all of them sloe-eyed and girlish – tend to blur together. But the book amply demonstrates something I’ve always admired about Timm’s art: His ability to effortlessly render his women with a perfect center of gravity, their weight balanced as easily on the page as it would be in life. When you consider he is doing this with just a few curved strokes – where other artists fail at the same task with labored “photorealism” and heavy textures – it leaves this wannabe artist slack-jawed in amazement.

In short, Naughty and Niceis pretty much the only title this book could have.

1. Yiddishkeit is an anthology of comics stories illustrating the history and influence of Eastern European Jews on American culture. Courtesy Abrams ComicArts

2. Naughty and Nice is a collection of pin-ups from master animator Bruce Timm. Courtesy Flesk Publications

Are there any fully nude - or , more nude than the DC characters are , anyway ? - drawings in Timm's opus ???

As I said in the article, the DC characters are all fully clothed. I doubt DC would let him use them otherwise!

Dunno the origin of "good girl art." It's been around forever, probably as early as the '40s. If it precedes comics, it could go back farther than that. Anybody know?

No, just one chapter has DC characters. The rest is all Timm.