What do sea-going superheroes, mysterious murders and curious cats and have in common? They all make for great comics.

Let’s start with Aquaman, a character almost everyone’s heard of – and made fun of at one time or another. 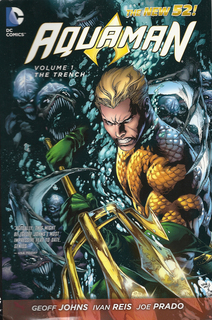 Conceptually, it’s deserved. Aquaman debuted in 1941, a cheap knock-off of another sea king, the popular Sub-Mariner over at Timely (now Marvel) Comics. But whereas Prince Namor had a volatile and interesting personality, Aquaman was as bland as mayonnaise. And where Namor was incredibly strong, bounced bullets off his chest and could fly, Aquaman could only … well, all together now: Aquaman swims fast and talks to fish.

All of which has dogged the Sea King ever since. He became a household name thanks to cartoons in the 1960s, but nothing could ever overcome his essential boringness. Not only was he overshadowed by his fellow Justice Leaguers, but even his wife was more interesting. (Mera is a gorgeous other-dimensional princess with a fiery disposition and the ability to control and shape water. Given that she and Aquaman live in the sea, that power essentially makes her Green Lantern with gills.)

Now, as you’d expect, DC Comics has made numerous attempts to make a potentially valuable trademark like Aquaman more popular. But as long as all he did was swim fast and talk to fish, that wasn’t really going to happen. And so it is, at long last, DC has reached the conclusion I did back in the 1960s: For the Marine Marvel to hold his own in a world with Superman, Green Lantern and Mera in it, he had to be more powerful.

And, lo, so it has come to be. DC’s Chief Creative Officer Geoff Johns took a crack at the character when DC re-launched all of its superhero titles last September, and one of the first things he did was make Aquaman strong enough to throw an armored car across several city blocks … and bounce bullets off his chest.

Sound familiar? To be fair, it makes sense: Anyone who can withstand deep-sea pressure that can crush a titanium submarine would have to be made of pretty stern stuff.

Even more interesting, Johns tackled the Aquaman-as-joke idea head on, with the Sea King facing snark from surface-dwellers about talking to fish and being “nobody’s favorite superhero.” Aquaman crushes that idea pretty early on in this new series, and convincingly so.

Which means I can recommend the new collection Aquaman Volume 1: The Trench ($22.99) – and I am as surprised as I am pleased to say that.

Meanwhile, Rick Geary has released another in his graphic novel series “A Treasury of XXth Century Murder,” and it’s just as deliciously mysterious and well-done as all the rest.

Geary, as I’ve said before, has a wonderfully unique and old-fashioned art style, a sort of cross between cartooning and ancient woodcut – perfect for period pieces, like his “Murder” series. And I can’t say enough what a great historian Geary is, telling us exactly what is known about the various unsolved murders he digs up, and no more, leaving it to the reader to decide.

Lovers’ Lane – The Hall-Mills Mystery ($15.99) is just another gem, even though it’s not as famous a crime as some others in the series. This double-murder of an adulterous couple set suburban New Brunswick, New Jersey, all a-twitter with saucy speculation in 1922 – and it has the same effect today.

Finally, the latest in the Blacksad series has arrived from Spain, and it’s just as good as the rest. Blacksad is a feline detective in a world both anthropomorphic – i.e., it’s made up of human-like animals – and crime noir-ish.

Blacksad: A Silent Hell (Dark Horse, $19.99) takes our hard-boiled gumshoe to New Orleans for an adventure involving voodoo, hidden family relationships and official corruption. And, as usual, it’s a rip-snorting story by Juan Diaz Canales, where you forget immediately that everyone is an animal in a suit.

That’s because artist Juanjo Guarnido is impossibly good at just about everything. This book includes a lengthy essay from Guarnido on how he achieves his amazing watercolor effects, and it’s surprisingly absorbing. The use of animals is sort of a story cheat – you can’t trust weasels, alligators are rapacious, etc. – but not any kind of shorthand for Guarnido, who achieves a believable world, riveting facial expressions, thoughtful storytelling and expressive body language that would work equally well with human protagonists.

David's interpretation was my second favorite Aquaman run, but my favorite has nothing to do with story: I enjoyed the Sea King's original series due to the presence of Nick Cardy. I could -- and did -- look at Cardy's issues of Aquaman over and over, barely reading the stories (if at all).

He wasn't too shabby on Wonder Girl and Black Canary, neither!