It’s Scott Snyder’s world, and we’re just reading about it.

Snyder is a published author (Voodoo Heart) and has an MFA from Columbia University, where he also teaches writing. He’s in this column for writing comics, of course – a lot of comics, where everything he’s touched has turned to gold.

Two of those treasures were released this week in hardback compilations: Batman Volume 1: The Court of Owls (DC Comics, $24.99) and Severed (Image Comics, $24.99). While unrelated, the books share one element in particular: horror – which makes sense, coming from Snyder, the author of the horror anthology mentioned above, and Vertigo’s American Vampire. Oh, and they share one other thing: They’re both riveting. 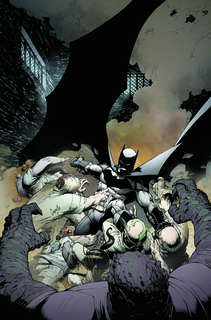 It may seem strange that the Batman book is subtitled Volume One, given that the character has been around since 1939. But DC Comics re-launched its 52-title superhero line in September as “The New 52,” all beginning again with first issues. In that sense, this is a new Batman, one who has only been around for about five years.

But in most senses, he’s the same Dark Knight we saw in “The Old 52.” Of all DC characters, Batman was affected least by the re-launch, even keeping most of his pre-New 52 creators – among them Snyder, who has under his utility belt a highly acclaimed run on Detective Comics and an important miniseries titled Batman: Gates of Gotham.

That latter explored Gotham City in the Gilded Age, its richest founding families and the architecture they were responsible for. Those families were the Waynes (which later gave us Batman), the Cobblepotts (Penguin), the Elliots (Hush) and the Kanes (Batwomans I & II, Betty “Flamebird” Kane and – interestingly – Bruce Wayne’s mother). With Court of Owls, Snyder is going back even farther into Gotham’s past, establishing an evil organization that has always controlled Gotham from its founding almost 400 years ago, and is so deeply hidden that it’s only known to Gotham’s citizens as the subject of a creepy nursery rhyme.

My first thought on hearing this plot was: “Ridiculous. There’s no way such a thing could exist in Gotham City for hundreds of years without Batman knowing about it.” To my delight, that was the Caped Crusader’s reaction too. And when the Court sends the Talons, their undead and almost unstoppable assassins, to erase this arrogant Bat-upstart, Batman’s overconfidence is almost his undoing. That’s clever writing, and shows Snyder has a deep insight into Bruce Wayne – a character he tweeted April 18 was “the coolest” character in comics, one he was “honored to write.” He followed seconds later with “And by coolest, I mean best.”

And what the Court puts Batman through – well, the word “horror” pops up again, and it probably would have destroyed anyone without the mental toughness of Bruce Wayne. Meanwhile, Snyder has also dropped hints about the backgrounds of the Grayson family (which gave us the first Robin, now Nightwing) and the Pennyworths (Alfred). And could there be some Waynes, Graysons or Pennyworths behind the masks of the current Owls? That answer could profoundly change Batman, and not in a good way.

The Court of Owls story doesn’t actually end with this book, which reprints Batman #1-7. A second volume will reprint Batman #8-11, which finishes the tale. But I didn’t feel short-changed by Court of Owls, and neither will you.

That doesn’t leave me much room to discuss Severed — which deserves a column on its own — that Scott Snyder co-wrote with Scott Tuft, a screenwriter. In it, a one-armed man in the present flashes back to his boyhood during World War I, and his encounter with a cannibal drifter who passes himself off as a traveling salesman. The drifter attaches himself to the boy, who is riding the rails in search of his mysterious father – a search which isn’t what it seems, and imperils everyone the boy cares about. Like with Court of Owls, Snyder mixes mystery with horror for maximum chills.

Given that Severed is set in 1916, and relies on emotional nuance for much of its terror, a lot rides on artist Attila Futari. Fortunately, his paint-and-wash technique captures both subtle moments and terrifying ones with equal facility, while his 100-year-old setting is completely convincing.

This book can be read as a metaphor for pedophilia, or as a straight horror tale (with a hint of the supernatural). Either way, Severed covers the horror gamut from nerve-wracking suspense to electric shocks of blinding terror.

So welcome to Scott Snyder’s world. You may never sleep again.

1. Batman Volume 1: The Court of Owls reprints the first seven issues of the new Batman title.