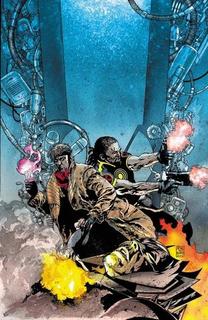 10. Gambit and Bishop: In real life, friendships are usually based on common interests.  But in fiction, the most interesting friendships are often the ones that bring disparate personalities together.  Bishop was initially suspicious of Gambit, thinking he was a traitor to the team.  However, even before Gambit was exonerated, Bishop overcame his aloofness.  Gambit’s charm was the perfect counterpoint to Bishop’s sullenness, eliciting a cheerful side and even a sense of humor that we hadn’t seen before. 9. Wonder Man and Beast: This is another wonderfully whimsical combination.  They made a great pair while they were on the Avengers.  However, they weren’t on the same team for that long a time.  Instead, their friendship truly blossomed after they were separated.  Their reunions and guest appearances were always a delight, and something to definitely look forward to. 8. Captain America and Iron Man: This may be a controversial choice as their relationship has been rocky since Civil War.  But that’s what made Civil War so poignant.  Before that, Steve and Tony had been staunch allies and great friends.  Their friendship was defined for me by a series of stories in 1994 and ’95 when Captain America’s super soldier serum was wearing off and Stark Industries was beset by scandal.  The two heroes sat down for a chat in Iron Man #303 and I’ve rarely seen a better depiction of “old friends.” 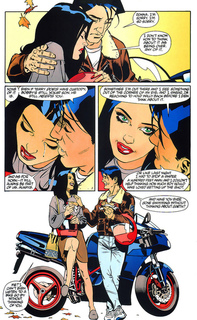 7. Dick and Donna: Whether they’re Robin and Wonder Girl or Nightwing and Troia, Dick and Donna have always been great friends.  This is a particularly unique combination in that it’s one of the few male-female friendships.  When all of the other Teen Titans were flirting with Wonder Girl, Robin treated her as a true peer.  They relied on each other.  They helped each other.  And they were there to support each other when other relationships went sour.

6. Archie and Jughead: When I was a little kid, I wanted friends like Archie and Jughead.  And, to some extent, my friendships in high school and college were a lot like that.  We just wanted to hang out and have fun, eat hamburgers and flirt with girls.  I can see now that their competing interests kept drawing them away from each other.  But I also know that the deep friendships of youth never truly leave you. 5. Green Lantern and Flash: This is a friendship that spans generations.  It started in World War II when Alan Scott and Jay Garrick would team up in Comic Cavalcade.  It blossomed during the Silver Age when Hal Jordan and Barry Allen became best pals.  And it continued into the modern age when Kyle Rayner and Wally West related to each other as the young kids of the JLA. 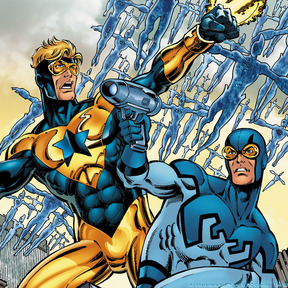 4. Blue Beetle and Booster Gold: They’re arguably the most famous friendship in comics.  At one point, they were practically inseparable.  They came to the Justice League separately, but they gelled as soon as they were on a team together.  They were the perfect comedy team, cracking jokes and creating hi-jinx.  However, the friendship wasn’t always good for their reputations as heroes. 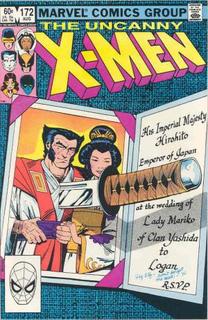 3. Wolverine and Nightcrawler: This is one of my favorite friendships and it’s summed up for me in a single line on the cover to Uncanny X-Men #172: “Hey elf, don’t forget the beer- W.”  They had a casual camaraderie that was a perfect for hanging out, playing games, drinking beer, joking around and making silly wagers.  But that casualness belied a deep connection.  That line was written on Wolverine’s wedding announcement, singling Nightcrawler out for affection and essentially asking him to be his best man. 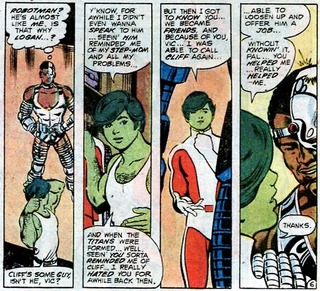 2. Cyborg and Changeling: You never forget your first and Cyborg and Changeling comprised the first friendship that I truly experienced through comics.  Like several of the other combinations, they were a bit of an odd couple.  Cyborg was quiet and stoic.  Changeling was outgoing and comedic.  Yet they complemented each other perfectly.

1. Black Canary and Oracle: There have been a lot of pairs of teammates over the years and I considered some of them for this list but no one has ever worked together quite like Black Canary and Oracle.  Their relationship surpassed teamwork.  They acted in concert, almost as if they were one person.  That close connection carried over into their personal relationship as well.  They were the best of friends even as new teammates, students and adopted daughters entered the picture.

I'm somewhat surprised that no one has challenged my choices yet.  I'll go ahead and get it started then.  I also thought about Captain America & Falcon, Power Man & Iron Fist, Batman & Superman, Fire & Ice and a couple of others that didn't make the final cut.

I haven't been on is a few days, but I did keep expecting to see Superman & Batman on your list, and was surprised I didn't. Power  Man & Iron Fist did come to mind, as well as Misty Knight & Colleen Wing even though they don't get much screen time. I also really liked the Beast-Iceman friendship from the original X-Factor run.

I think you're list is pretty good, Chris. A few other friendships of note; Matt Murdoch and Peter Parker also Peter Parker and Johnny Storm.

I know you focused on duos but the four earth Green Lanterns strike me as friends. I can't seperate them out to which two are best of friends, I think more of them as one unit.

Thanks for the suggestions, guys.

I did keep expecting to see Superman & Batman on your list, and was surprised I didn't.

As I said, I thought about it.  My final decision had to do the age at which I was reading comics.  I've heard lots of older fans talk about the great Batman/Superman friendship from World's Finest.  But the comics I read from the '70s-'90s presented those two great characters as foils for one another more than friends.  While I wouldn't quite embrace the Dark Knight Returns view of their relationship, they've never quite embodied friendship for me either.

Power  Man & Iron Fist did come to mind, as well as Misty Knight & Colleen Wing even though they don't get much screen time.

I also really liked the Beast-Iceman friendship from the original X-Factor run.

And that friendship was based on their relationship from the original Silver Age X-Men when they would hang out together and even go on double dates.  But that one hasn't persisted in the public consciousness quite as much as Beast and Wonder Man.

Ooh, good one.  I admit I didn't even think of that one.  I am filled with shame.

I thought about Pete and Johnny.  As a couple of jokesters, they've always paired up well.  I'm not sure about Matt and Peter though.  Despite their recent crossover, I don't remember a lot of team-ups between the two.

From the looks of it, I could have probably done a second ten: Superman/Batman, Captain America/Falcon, Fire/Ice, Power Man/Iron Fist, Misty Knight/Colleen Wing, Human Torch/Spider-Man, Quantum/Woody and so on.

I know you focused on duos but the four earth Green Lanterns strike me as friends. I can't seperate them out to which two are best of friends, I think more of them as one unit.

That's an interesting alternative: what are the best buddy groups?  Like the boys from the Stand By Me movie, sometimes the best friendships are formed in larger circles.  I could have added Colossus to Wolverine & Nightcrawler or Thor to Captain America & Iron Man.  What are some other possibilities?

Up until the mid-late 80s, Superman and Batman were very close friends.  Their friendship, along with Wonder Woman, made stories like Alan Moore's "For the Man Who Has Everything" work so well.  Then you had John Byrne's Generations minis and Steve Rude's mini, World's Finest.  And I'm no huge fan of Jeph Loeb, but his stories in the Superman/Batman series and in the Superman title brought Clark and Bruce back together as friends.  And if folks know Batman and Superman through their various animated shows/films since the 90s...the two have had their differences, but they are always shown to be closer to each other than the rest of the League.  The final scene in the new Justice League: Doom, written by the great Dwayne McDuffie, is a great Batman/Superman friendship moment.  Oh, and if you haven't seen it yet, that new DVD has a fantastic tribute film to McDuffie as an extra.

Great piece. I never thought of Cap and Iron Man as particular pals either, so much as senior Avengers. Lots of great suggestions ... I don't think anyone has mentioned Power Girl and Huntress, pre-Crisis.

And even though he was Superman's Pal, I was never convinced by the Superman/Jimmy friendship as, outside of Jimmy's capers, they never actually spent time together.

Growing up, I had a very good friend who was an atheist.  We were both big X-Men fans and the friendship between Logan and Kurt helped us in that it was kind of a fun-house mirror that we could use to look at our own relationship.  We haven't changed our outlooks on existence and we're still good friends...probably helps that the X-Men also made me into a leftie.  ;)