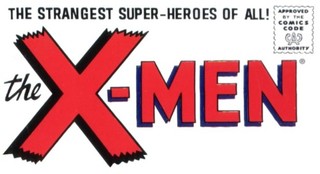 I’d read most of them before. In fact, I’d read most of them more than once. But this was the first time that I would start in 1963 with X-Men #1 and systematically read right up through the present day. Actually, I started before X-Men #1 by reading the origin story Children of the Atom published in 1999 first. This was also the first time that I would include every one-shot and mini-series associated with the X-Men. However, I opted against reading ongoing spin-off titles except for the issues that were directly involved in a crossover. If I had done that, it probably would have taken a dozen years. But who knows? I may get to that next.

This week, I finally finished. I intentionally saved Claremont’s future-set story X-Men The End for the end. That way I’d have a specific end point rather than having the project peter out when I caught up to the present day. I finished the final Avengers vs. X-Men tie-ins last week and blazed through The End over the weekend.
With the exposition out of the way, let’s get to your questions…

George Poague: Any reactions? Have your eyes stopped bleeding? ;) Did you just read issues of Uncanny X-Men, or did you also read the spin-offs (from New Mutants on)? And the guest shots and miniseries? 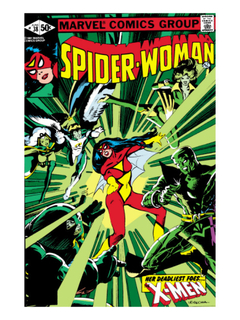 Yes. I feel a strange sense of accomplishment. It took an unexpected amount of dedication. When I did reading projects like this in the past, it would usually take a couple of months, no more than a year. This was the biggest project that I’d ever attempted and I had no idea that it would take this long.

I was never tempted to give up but I did set the project aside a couple of times. In each case, I had binged at some sale or another- a trade paperback blowout or back issue bargain hunt- and I took a break from the X-Men while I read new comics. That’s probably what prevented bleeding eyeballs or insanity (though the latter diagnosis is debated).

At the same time, it was a lot of fun. I wouldn’t have done this if I didn’t love the X-Men. I enjoyed it and I’m glad I did it.

As I answered earlier, I didn’t read the ongoing spin-off titles like New Mutants and Excalibur except for issues that were directly a part of a crossover like the Morlock Mutant Massacre. I did read the guest shots and mini-series. I even picked up the other half of shorter crossovers like Ghost Rider #26-27 and guest appearances in other titles like Spider-Woman #38 (though I eventually had to abandon that angle as well).

John Dunbar: What held up? What didn't? Did anything surprise you, as in "I think I liked this better the first time" or "I don't remember this being this good before"? 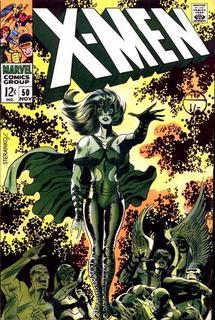 In most cases, the answer is what you would expect it to be. There are a lot of great X-Men runs and they remain great whether you read them for the first time or the fifth: Roy Thomas & Neal Adams, Chris Claremont & Dave Cockrum & John Byrne & Paul Smith & John Romita Jr. & Marc Silvestri & Jim Lee… [takes a deep breath], Scott Lobdell & Joe Madureira, Grant Morrison & Frank Quitely, Joss Whedon & John Cassaday and so on.

There were also some rough patches. One of the things that I discovered is that I had less patience for those rough patches this time ‘round. For example, I couldn’t tolerate Claremont’s heavy-handed narration during his return to the X-Men in 2000. I was willing to read every word the first time because I didn’t know what was going to happen. But I found myself skimming a few narrator speeches this time. I also didn’t bother reading The Arena story in X-Treme X-Men as I hated it the first time. As far as I’m concerned, it doesn’t count. Plus, I didn’t bother buying two issues of X-Men Legacy I had originally skipped.

Even so, there were a few surprises. I enjoyed the Arnold Drake issues more than I remembered. A big part of that is the early Jim Steranko and Barry Windsor-Smith art. Partly, the first Roy Thomas run that preceded those issues was so bad anything would look good in comparison. Yet Drake deserves some credit for mixing things up a little with the introduction of Polaris and Erik the Red. 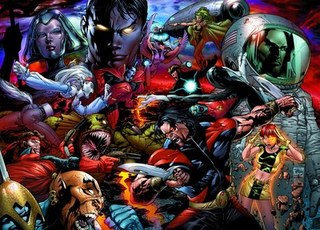 Some of the recent runs held up really well. I loved Ed Brubaker’s epic Rise and Fall of the Shi’ar Empire when I first read it but it was even better when I was able to read the entire story again in one sitting. Second Coming was better than I remembered. The crossover had a very strong narrative progression through different stages of the battle and a deep emotional core with the deaths of Cable and Nightcrawler. It was a story I enjoyed at the time- I even wrote a eulogy for Nightcrawler- but I admired the story-craft that much more now. I also appreciated the way that it subtly set up future storylines- this is where the rivalry between Cyclops and Wolverine really begins to turn into animosity, and where Cyclops starts to reject Captain America and the rest of the “outside” world.

I was disappointed in a few things. Warren Ellis’ run on Astonishing X-Men wasn’t as good as I remembered it. It was all flash, no substance and the stories didn’t really move forward. The X-Men/Micronauts mini-series didn’t live up to the hype. I hadn’t read it before but it came across as a typical team-up. It’s probably not something I’ll bother to read again. And there’s one other…

Jeff of Earth-J: Chris, I know you said you didn't read any of the spin-off series, but I'm wondering if you made an exception for X-Men: The Hidden Years...?The title knocked Avengers out of my personal "#1 favorite Marvel" spot at the time, but I've never gone back and re-read the entire series. I have a feeling that it might not hold up in a marathon reading session and that it might not fit very well following directly on the heels of [having read] X-Men #66.

You guessed right, Jeff. I read The Hidden Years between the first X-Men series and the All-New revival and it did not hold up well. I loved the series when it came out. I appreciated the way that John Byrne imitated Neal Adams’ art style. And it was a lot of fun to spend time with the original X-Men plus Havok and Polaris. But, on reflection, it wasn’t as good as I thought at the time.

Thanks for confirming my suspicions concerning The Hidden Years, Chris. Another disappointment I had regarding that series is that Joe Quesada cancelled it before Byrne could relate “The Secret Empire Saga” from the mutants’ point of view. (For those reading this who may not know, during the time the X-Men’s regular series was on hiatus, the story of multiple missing mutants ran across several different series and culminated in Captain America.)

Jeff, I agree with you regarding the Hidden Years cancellation Even though it wasn't as good as I remembered. it fit a specific niche that was otherwise unfilled. Plus, like you, I was interested in how Byrne would retell hidden years stories like Secret Empire and the gray Beast. Unfortunately, it fit a niche that Jemas and Quesada didn't want to fill and they cut it despite otherwise decent sales.

Chris, I was flattered.

Of course I don't mind.

Personally, while I welcomed the arrivial of X-men: The Hidden Years, I was put off by the bizarre angles and unusual page layouts so often.  Also, the inclusion of the odd bird-like creature, I viewed as more of an effort to give Warren something to do, as Byrne may have found he was left out of the sweep of things.  But this is based upon my reading of the series only once.

I note that you chose to display TWO marvel covers that are essentially green!  I recall reading that for years, the production staff killed covers that were essentially green with the understanding that Stan hated green covers. Somebody finally took it to him and he denied it. He said perhaps he had commented that a green cover once had not worked very well, with the example right in front of him, and someone may have over-reacted to that as an edict. But I recall this story coming out just as Captain Marvel #3 with the Green cover came out.  Some have thought that this ban was a result of the Hulk's original cover coming out Grey, instead of green. Who knows!

The Spider-woman cover works well.  The green is a good contrast to her outfit, in a queesy sort of way.