In the mid ‘90s, Don Rosa took up the monumental task of illustrating The Life and Times of Scrooge McDuck. He wrote a 12-issue epic that covered the pivotal moments from Scrooge’s younger days before he became the richest duck in the world. This volume collects the first 6 issues. Even better, it also includes notes from Don Rosa in which he reveals the thought process behind story choices and reflects upon the clues to Scrooge’s past that were planted by Carl Barks. 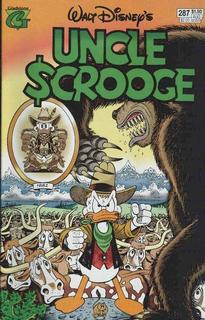 The stories are excellent. Rosa gives each installment a unique flavor, whether it’s Scrooge’s boyhood in Scotland or his adventures as a young man on a Mississippi steamboat. For the most part, they’re well paced with sufficient obstacles to keep the reader interested and a few side gags to keep the reader entertained. However, I’ll admit that a couple of tales got bogged down in secondary details or dragged out a scene until it became repetitious.

My favorite story was from the fourth issue in which Scrooge joins a cattle drive. There’s a famous image in which several parties chase each other around circular buttes in the South Dakota badlands. It was a treat to see how Rosa set up all of the conflicting characters and then brought them together as part of one wonderful farce.

The panels are visually interesting as well. Rosa provides numerous memorable scenes such as a fiery ghost on horseback and an underground cavern that doubles as a steamboat stateroom. Of course, there’s also the aforementioned circle chase in the South Dakota badlands. 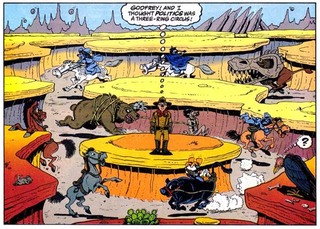 I was particularly fond of Rosa’s reflections. It was interesting to have him describe how he formed a complete story around a small tidbit mentioned in an old duck story by Barks. And I was impressed by the way in which Rosa would seamlessly work other small details into a larger narrative. Best of all, his love for the character clearly shines through in his reflections.

However, I was also amused to compare my reactions as a reader to Rosa’s reaction as a writer. Rosa’s least favorite story was the cattle drive. He noted that he prefers stories that take place in a single setting and a single day. He cited the fifth issue when Scrooge returns to Scotland to fight for Castle McDuck as a good example. My reaction is pretty much the opposite. “The Life and Times” suggests an epic and that’s what I was expecting- not only in the volume as a whole but also in the individual installments. I was especially fond of the cattle drive story that spanned several months and several states. My least favorite story was the castle story from the fifth issue. In my opinion, it contained a lot of filler that stretched it to a full issue, particularly an extended dream sequence that occurred while Scrooge was drowning.

Even so, that’s a difference of opinion about the relative merits of individual stories. My opinion of the epic as a whole remains quite favorable. Greg Rucka was given the task of re-launching Wolverine in a new solo series in 2003. This ultimate collection contains the complete Greg Rucka run, 19 issues in all.

Rucka’s approach to Wolverine is stripped down. Wolverine doesn’t wear a costume. He’s more like a rural vigilante, running around in jeans and a ripped shirt. His adventures are also more down to earth. He investigates a Montana cult that’s been kidnapping women, a smuggling operation that uses illegal immigrants to bring drugs across the border, and rumors that a wild, almost feral, escapee from the Weapon X program is living in the mountains.
There aren’t a lot of other superheroes either. Nightcrawler makes a couple of guest appearances, but he doesn’t actually help in the adventures. Instead, he shows up as a confidant and drinking buddy. Sabretooth is the only supervillain to pop by and he doesn’t appear until the final story arc. Plus, he’s similarly stripped down, wearing civilian clothes instead of a costume.

This approach often works well with Wolverine. Chris Claremont and John Buscema took a similar tack when they launched Wolverine’s first solo series. And other writers have followed similar routes. Wolverine is just as effective without costumes and the flashy baubles of superheroes. Rucka’s vision of Wolverine as a rural vigilante is consistent with the character. 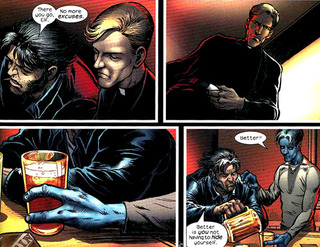 Unfortunately, Rucka’s approach to storytelling is similarly stripped them. This re-launch occurred at the height of the decompression fad and the three previously mentioned tales make up the whole of the volume. That’s right. This 19-issue volume contains only three stories. That isn’t automatically a problem. It’s theoretically possible to tell a compelling story over 6 or 7 issues. But that doesn’t happen here.

There aren’t enough twists or obstacles to keep a reader’s attention over that length. There are a few twists. The villain of the drug operation is a bit of a surprise. And there’s a nice moment in the third story when Wolverine preemptively betrays Sabretooth. But those major moments are too spread out. The stories drag and I frequently wondered when we would move on to something else.

The art doesn’t exactly help either. I’ve enjoyed Darick Robertson’s work in other places yet I wasn’t impressed with it here. It was often unimaginative. It’s like he was a cinematographer who forgot that his camera could move. Leandro Fernandez was much better on the middle arc, though I think he inked himself a little too heavily at times and obscured his otherwise fine pencil work.

Overall, this was a very disappointing volume. On the bright side, I’m glad I didn’t pay full price for the individual issues. I could at least console myself that I waited to buy the trade at a much more friendly price point.

The company is listed as Kaboom, which could be an offshoot of Boom, or not.

It is, their kids line.

I know this is borderline blasphemy, but I actually prefer Don Rosa’s Scrooge to that of Carl Barks (what I’ve read of it, anyway, which is not much, relatively speaking).

...I suppose that if I suggested putting the price , if you're going to cite it , in a seperate " box " , as movie reviews do with length , major acting and behind-the-cameras personnel , length , stuff like that , you'd say what you already...

...I think it becomes especially of interest...

...Well , when it's not super-obvious - And considering the curious limbo that " traditional Disney " is in now , as I have commented here about.........

The company is listed as Kaboom, which could be an offshoot of Boom, or not.  Yes, I adopted your suggestion of including issue information.  Thanks for that; it was a good idea.  But there's only so much I can add.  This is a review column, not the library of congress.

It looks like my earlier suggestion re: listing reprinted issues has been adopted here as well , but.........

He'd just bury him in the bottom of the money bin...healing and immortality don't mean much if you can't move under tons of gold.

Uncle Scrooge can throw quite a tantrum but I think Wolverine's berserker rage is the bigger edge.

So, if Scrooge McDuck fought Wolverine, who do you think would win?

Jeff of Earth-J replied to Jeff of Earth-J's discussion Swamp Thing
"ISSUE #119: Tefé is taken by the "bad man" to her "new home" where…"
16 minutes ago

Jeff of Earth-J replied to The Baron's discussion Movies I Have Seen Lately
"OTOH, if Connery had stuck around, Cubby Broccoli might not have tried the "back to…"
23 minutes ago

ClarkKent_DC replied to The Baron's discussion RIP Olivia Newton-John
"Although Xanadu is maligned as one of the worst films ever, and I'm sure it has not aged…"
1 hour ago

The Baron replied to Jeff of Earth-J's discussion Sandman (TV)
"She's playing the "John Constantine" part, isn't she?  At least,…"
4 hours ago

Jeff of Earth-J replied to Jeff of Earth-J's discussion Sandman (TV)
"She's Lady Johanna Constantine... and it is pronounced with a long "I" (-TINE)…"
4 hours ago