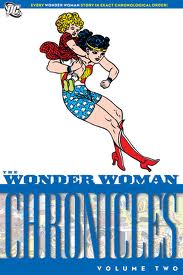 I have a confession to make: this was my first extended exploration of the Golden Age Wonder Woman. I’d read her first appearance and origin story in a couple of places. But I had never read a 1940s collection of stories before now.
Over the years, I’d heard a lot of other comic book fans describe these adventures so I was curious to experience them for myself. I will agree with those fans who claim that no one else has written the character of Wonder Woman quite like her creator, William Moulton-Marston. Marston’s approach is certainly distinct. It’s also idiosyncratic. For that reason, I would say that no one else has written the character “the same as” Marston, but I wouldn’t say that no one has written the character “as well as” him. Modern writers like George Perez, Greg Rucka and Gail Simone have surpassed Marston’s peculiar take on his character.

The first thing I’ll say is that Marston’s Wonder Woman is fun. She rushes from place to place with the reader caught up in her tailwind. She rarely sits still and that makes for often exhilarating adventures. This is especially apparent in the stories from Sensation Comics where the shorter format forces the action to happen quickly. The character is also fun. She laughs with her friends and at her enemies. She revels in her powers and enjoys surprising people with them.
However, despite the brevity of the stories, Marston still manages to get sidetracked. In one story, Wonder Woman has to play in the World Series as part of a plot to defeat Ares. In another, she becomes a bowling shark, faking ineptness before becoming a champion. The rationale behind these odd excursions is weak and forced (think of the pod race sequence in A Phantom Menace). The stories may be fast-paced but they aren’t always well constructed. This is especially true of the Ares epic from Wonder Woman #2 which opens this volume.

Marston’s personal predilections towards sado-masochism are also readily apparent. I’d always heard that was the case but never quite believed it. It’s not uncommon for heroes to be caught and bound by their enemies, whether it’s Captain Marvel or James Bond. But it’s almost impossible to miss with the prevalence of spankings and the repeated talk of submissive behavior.

Despite my exasperations and misgivings, I still enjoyed this volume. I read it quickly and had a lot of fun with it. It wasn’t held back by the repetitiousness that weighs upon Robert Kanigher’s Silver Age stories. There was a lot of variety in both setting and story. I also enjoyed the character. Wonder Woman’s compassion is admirable and her joy is infectious. I won’t suggest that everyone would enjoy these tales. They’re definitely a product of their time and of their unique creator. Yet with historical allowances and the right frame of mind, they can be amusing. 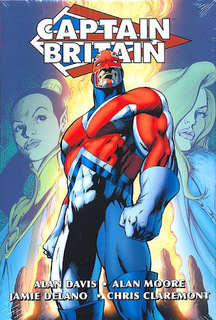 It’s hard to know where to start for, in many ways, this is the middle of an adventure. The first page is a recap in which Captain Britain recalls all of the events that occurred during the Alan Moore/Alan Davis run. The last page is both a wrap-up and a set-up, establishing the status quo that Captain Britain will bring with him to Chris Claremont and Alan Davis’ Excalibur. Yet in between, there is a phenomenal collection of short stories by Alan Davis and Jamie Delano.
These are short stories. They generally run from 8 to 12 pages. Yet it’s amazing how much Davis and Delano accomplish in such a short format. Davis and Delano manage to tell complete story- with a beginning, middle and end- in each chapter. That’s particularly impressive and refreshing considering that most current comics require 6 issues to finish a story. However, the transitions from one story to another are sometimes abrupt, especially in a collected volume like this.

There’s a lot more to admire about Captain Britain than story structure or pace. The stories themselves are highly imaginative and expansive. They’re also ongoing and evolving.

I really appreciated the way in which Delano and Davis expanded upon the world of Captain Britain. Many of the pieces were already in place, thanks to the previous run by Alan Moore. But Delano added new toys to the box- new villains, alternate Captain Britains and different government agencies. The biggest innovation is arguably the Warpies- children born with deviations that were the result of residual energy from a breakdown in the continuum of time and space. Delano added a new breed of mutants that alluded to the fall-out from Chernobyl and Three Mile Island.

Another great strength of this series was its use of supporting characters. They would change from one appearance to the next. They wouldn’t become unrecognizable but there would be subtle shifts that told us their lives continued even when they were off-panel. A team of villains would have new members or a new leader. A hero would have a new costume or position. Two characters would become a romantic couple from one appearance to the next. These changes gave a sense of reality to the series. The other characters weren’t simply waiting around until the next time Captain Britain noticed them. They had interests and stories of their own.

Of course, all of those secondary considerations mean little if the title character doesn’t hold up his end. Thankfully, Captain Britain is a delight to read about. At times, he’s the straight-laced star as the weirdness of the world circles around him. There are some wonderfully funny moments when Brian Braddock feels put out by the odd guests who have invaded his ancestral home. At other times, he’s the bull-headed strongman. He’s not a dummy. He has a background in science and multiple degrees. But he sometimes forgets to think about a situation before rushing in with his fists. He’s a good guy with a strong moral center but those imperfections make him more interesting.
Altogether, that makes Captain Britain one of the most enjoyable trades I’ve read in some time.

...A suggestion re: the format of these:

Why don't you , in a seperate " box " , much like movie reviews listing credits , list the comics these origianlly appeared in ???

the Wondy stories they appeared in - Perhaps even if " incidentia " like house ads/content pages/text stories appear ??? - in that portion .

For the CB one , I guess listing the original , little-known in YankLand , UK Marvel appearances and whatever conventional US issues they may've appeared in before might be needed here .

That's a good suggestion, Emerkeith.  I added the issue numbers to the article.

Wonder Woman Chronicles included the stories as they appeared in chronological order.  The volume didn't have any extras that you mentioned, although a few ads for war bonds were included as part of the final panel.

As you surmised, the Captain Britain trade collected the stories that were available in the UK market but not the US.  This trade was initially published in 1989 and comprises the first release of these stories for the US.  The image in the article is from a later printing but I read a first printing that I had purchased used.

Plenty of good points about both collections.  I've been looking for the first Wonder Woman volume in that series for a while now.  It sounds fantastic.  The more original voices in mainstream superheroes the better.

I think the CB cover that you use there is for the recent collection that took the Captain from just before Moore's run all through that to the end of Delano's run.  (Although even then, I'm not sure why Claremont's name is there.) It's a collection I'd love to have, but can't really justify, as I have most of the stories in it already.

Glad you enjoyed the Delano/Davis stories.  The short self-contained chapters are from the same tradition as 2000AD, and they do focus the creators' minds as to what they are trying to do with these few pages and what are the most crucial bits of information and storytelling choices that will get that across.  The 'training' in 2000AD might have contributed to the success of many British creators in the US.  (And also Steve Dillon.)

Here is a long CB discussion that includes the Delano issues that you might enjoy, having now read the issues.  Here, in particular, are some comments from me on the meaner and more misogynistic aspects of one of the final chapters.

CAPTAIN BRITAIN: A series with soaring highs and crushing lows. The Davis/Delano period is definitely one of the highs.

Thanks, Jeff.  I like your summary of my review.