10 Fun Facts to Know and Tell about Marvel's Black Widow July 15, 2021 — The saga of Natalia Alianovna Romanova, a.k.a. Natasha Romanoff, has come to its bittersweet end with the Black Widow movie. Probably. But here are 10 Fun Facts to Know and Tell about Marvel’s Superspy Avenger from the comics that spawned her:

Back in 1940, when Marvel was called Timely Comics, it trotted out a character named Black Widow, who appeared a total of five times.

Her story begins when she is still mortal, a medium called Claire Voyant (let’s be kind and assume it’s a stage name). After she puts a curse on some non-believers, she is murdered and goes to Hell.

And Satan is there to greet her! “Come,” he says, “Let me show you my kingdom of eternal pain!”

It isn’t really clear why Claire is bad enough to be damned for eternity, nor why the devil takes such a personal interest in her. But he gives her a costume (basically a black onesie, severe eye makeup and boots) and sends her back to Earth.

“On the upper world are mortal creatures whose hearts are blackened with wickedness and corruption. You, the Black Widow, will bring their evil souls to me!”

As origins go, that one kinda sucks.

In recent press interviews, star Scarlett Johansson discussed how Romanova — going by “Natalie Rushman” — was just a sex object in her introduction in Iron Man 2 (2010), before growing as a character. The 2010 Black Widow was so hyper-sexualized, said Salon.com’s Melanie McFarland, that she was “some version of a honey trap.”

That was how the character started in the comics, too. When “Madame Natasha” was introduced in the Iron Man strip way back in 1964, she wasn’t just a version of a honey trap — she was the real deal. She was sent from the Soviet Union to seduce Tony Stark, dressed to kill (literally) in a tight green evening gown, short black hair, opera gloves, a fur stole and, of course, a veil.

“What a beauty she is!” thinks the smitten Stark, who is fooled right up to the climax of the story, because he is a shallow horndog. She even weasels back on his arm in the very next issue, despite betraying him in the previous one.

Romanova next sinks her claws into Hawkeye, in the Avenging Archer’s first appearance.

“It is fortunate that he is taken with my beauty!” she thinks. “I will be able to twist him around my little finger! But he must not learn I am really a Red spy!” Yeah, that would kinda queer the deal.

They become something of a team, although not an equal one. Hawkeye is reluctant to break the law, but Madame Natasha vamps the infatuated archer into all kinds of dumb things, like attacking Iron Man with a bow and arrows. “He believes any lie I tell him,” Nat thinks a few issues later. “Strong as he is, he is putty in the hands of the Black Widow!” 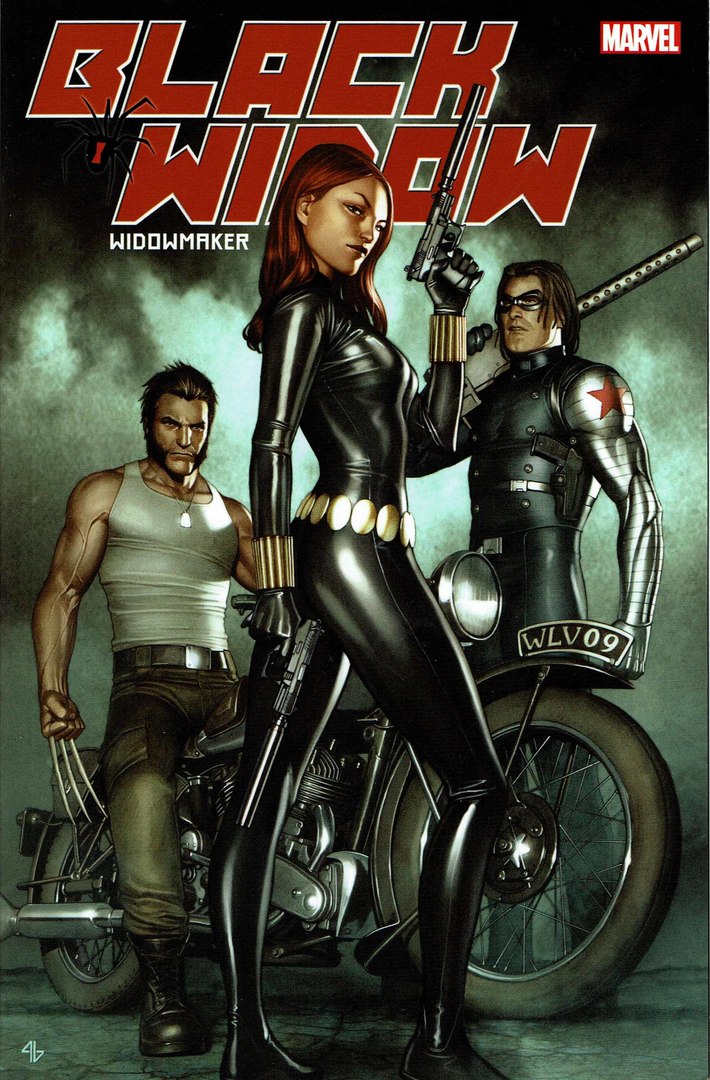 The long-lived Black Widow (center) shared adventures decades ago with Wolverine (left) and the Winter Soldier. She also had a long love affair with the latter, when both were Soviet agents. (Cover art for Black Widow: Widowmaker trade paperback by Adi Granov, copyright Marvel Comics)

4) She Was a Supervillain

The modern Black Widow begins to take shape in 1965. She finally develops a conscience, not only returning Hawkeye’s ardor, but renouncing her “Communist masters.”

Unfortunately, those Slavic meanies force her to keep working for them by threatening the lives of her parents. (Who are never seen again.) They invent various spider-gimmicks to mimic a black widow, and grant Natalia her very first costume.

It’s a black swimsuit affair with blue fishnet nylon on legs, arms, front, back … well pretty much everywhere the swimsuit and her head weren’t. I can only assume that “fishnet” said “spider web” to that issue’s artist, Don Heck. Or maybe he just liked the stockings.

Truth to tell, it was kinda ugly. She got the black leather catsuit (and red hair) two years later, and never looked back.

When Hawkeye reforms and joins Marvel’s premier superhero team, Black Widow follows her romantic partner from the Iron Man strip to the Avengers title, becoming almost a supporting character in that book. But in 1967, just before being offered Avengers membership, she gets a phone call from Nick Fury and signs up with S.H.I.E.L.D.

That was it. That was her whole defection story.

I don’t remember exactly when Nat ends the relationship with Hawkeye, but in 1971 she hooks up with Daredevil, in more ways than one. She co-stars in his book for four years as both significant other and crimefighting partner. And even today, while they are no longer a couple, they still occasionally hook up.

For example, there’s a scene where Matt “Daredevil” Murdock drops by the Widow’s apartment in 1999.  “Well, you’re looking particularly lovely today,” says the blind lawyer. “I’d imagine.” She assumes it’s a booty call, and she’s right. “Back for a little more couch or roof action?” she asks. “Actually, I was thinking along the lines of counters and throw rugs,” he replies.

7) She Was a Team Player

Black Widow and Daredevil are asked to join the Avengers in 1973. DD declines (he would join several decades later), but BW jumps at the chance. She wasn’t a charter member in the comics like in the movies, but she’d been around for more than 10 years. And she was at least as useful as Hawkeye, who keeps bringing a bow and arrows to gunfights.

She also founded and led a group called the Champions from 1975 to 1978. That was in addition to S.H.I.E.L.D. and Avengers missions, and frequent guest appearances, in various books in the ‘80s and ‘90s.

For a hard-bitten loner spy, she had a lot of friends. The Black Widow miniseries in 1999 kicked off a cascade of revelations that re-wrote the character’s origin. (Cover art for 2001 Black Widow trade paperback by J.G. Jones, copyright Marvel Comics)

8) She Has a Complicated Past

A character who’s been around as long as Black Widow often ends up with more than one origin — if, for no other reason, to explain how they’ve been around for so long.

The first we heard of Natalia’s past, she was a ballerina with the Bolshoi whose husband, Alexi Shostakov, was a Russian test pilot whose death she was trying to honor by turning spy. Turns out that wasn’t true.

In 1972, a new origin established that baby Nat’s dying mother threw her out of the window of a burning building in 1942 Stalingrad, into the arms of a soldier named Ivan Petrovitch, who raised her as a spy. Turns out that wasn’t true, either.

Starting in the late ‘90s, various miniseries revealed that Nat was raised in the Red Room, which used drugs and psycho-conditioning to implant a couple of fake backgrounds (thus explaining the earlier origins). She also received pheromonal inhibitors (like in the movie), performance-enhancing drugs and some sort of treatment that has allowed her to stay young and gorgeous for umpty-ump years.

9) She Married the Red Guardian

Say, you remember that test pilot who died? Well, almost everything about that story was a lie. It’s true he was married to Romanova, but that was for espionage purposes, not romance.  And he didn’t die; the Soviets instead trained and juiced him to become the Red Guardian, the U.S.S.R.’s answer to Captain America.

Unlike his movie counterpart (played by David Barbour), the comics Red Guardian actually did fight Captain America, in a two-part Avengers story in 1967. He died at the end of that story, but this being comics, got better.

Romanova died in the 2017 "Secret Empire” story, an event too long and tedious to get into here. But of course she got better.

After “Secret Empire” ended, the Widow was cloned, with all of her memories (somehow) downloaded into her (new) brain. So it’s like she never died.

So could the currently dead Black Widow of the movies return the same way? I don’t know … but you can bet Marvel Studios mastermind Kevin Feige has read that story.