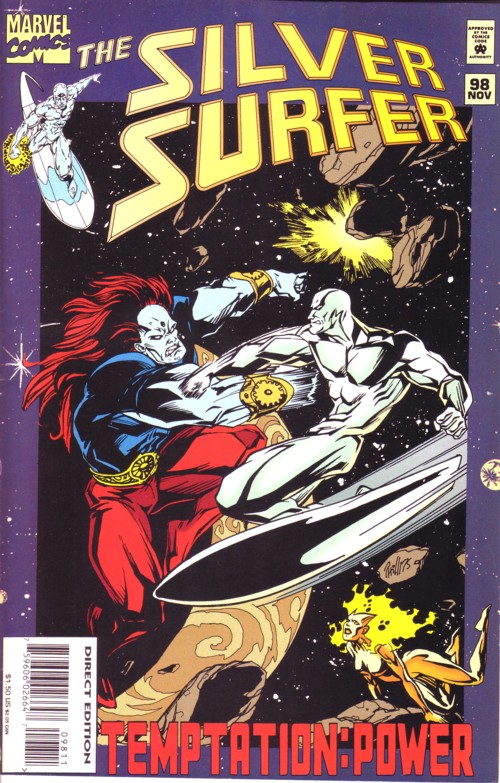 There isn't much I like about that cover, but it does actually look like the Silver Surfer is surfing on an invisible wave.

Well, The Champion (terrible, generic name) barges into Thanos' base demanding Thanos return the Gem of Power to him. Thanos just teleports him away.

Now we see Surfer and Nova soaring through the universe, when they come upon a destroyed world. They venture further into the center of destruction, and discover The Champion there. The Champion tells them he destroyed the planet out of frustration after Thanos dismissed him. Even though he no longer has the Power Gem he now has a pair of gauntlets that give him near limitless power. These were given to him by an alien race who worshiped him as a god. The Champion then killed them all, out of boredom. This enrages the Surfer, but Nova calms him down.

Unfortunately, she mistakenly lets The Champion know that Drax currently has the Power Gem. The Champion flies off to confront Drax. The Surfer stands in his way, and they begin to battle. Ol' Chromedome asks Nova for some help, she answers him by flying off. The two do battle for a while, and then Nova comes back with Drax the Imbecile in tow.

Now The Champion is geared up for another fight, but Drax defeats him with one blow. Since he is unconscious Nova takes his gauntlets from him. Then, offering them to Silver Surfer. Surfer lets her know that no one should have that much power, so he destroys the items.

Silver Surfer is on my list of characters that I like the idea of liking them more than I do like them. He is usually a sad sack and/or boring This issue though is a really a good little story. The fight scene between Silver Surfer and The Champion was really well done. One thing that did annoy me was that the size of Surfer's surfboard changed quite a bit. Sometimes it was big enough for both him and Nova, other times it looked like a wakeboard.

That cover is hideous.  Did you like the interior art better?

Oh fer sure, the interior art was tons better. Overall I still recommend this issue.