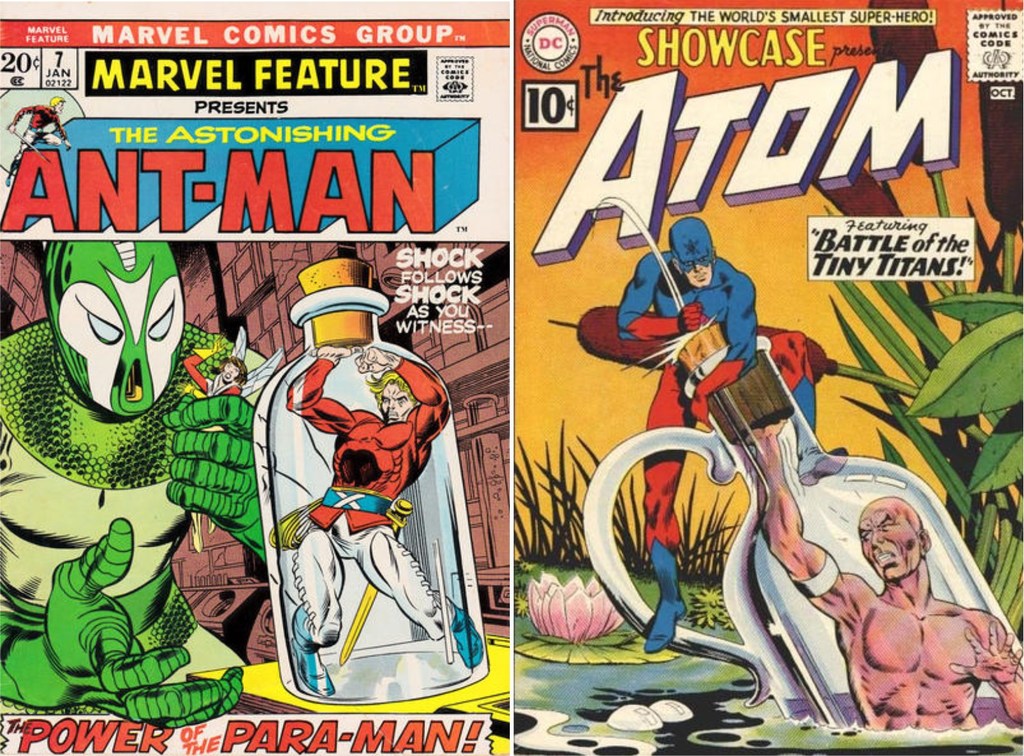 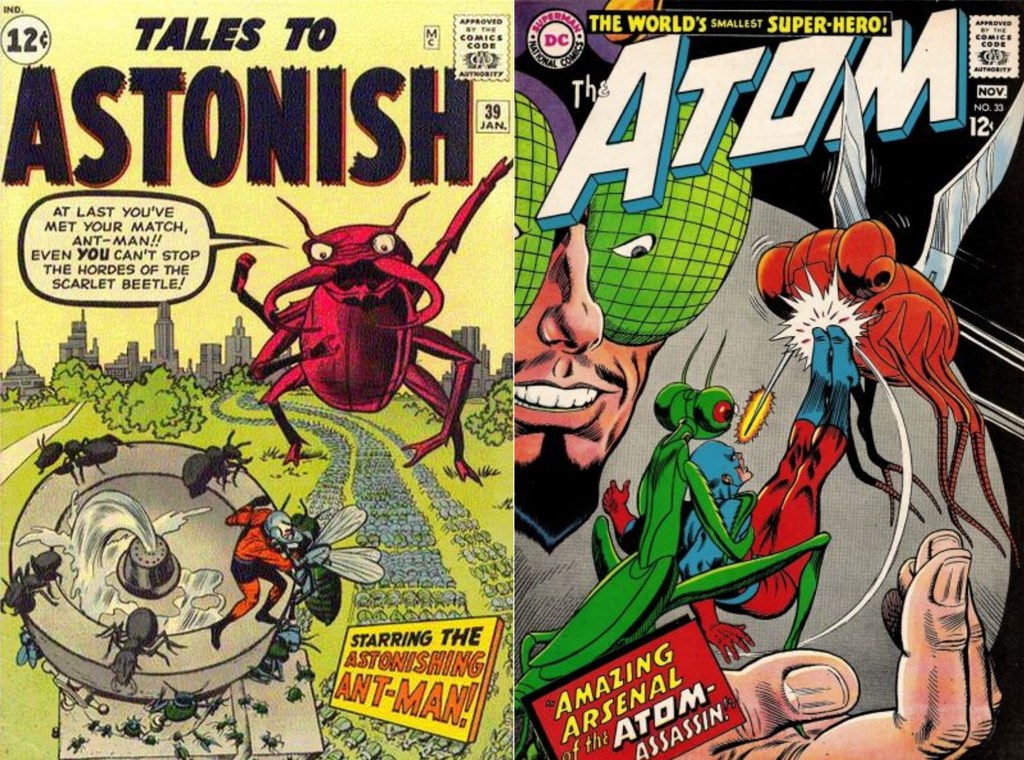 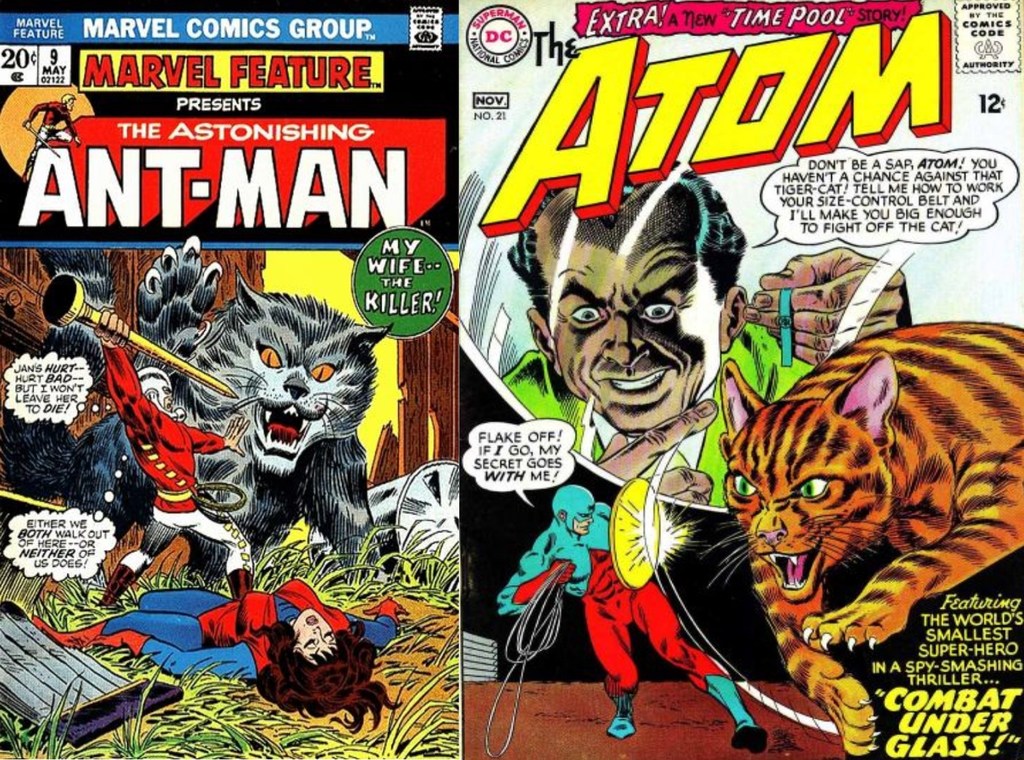 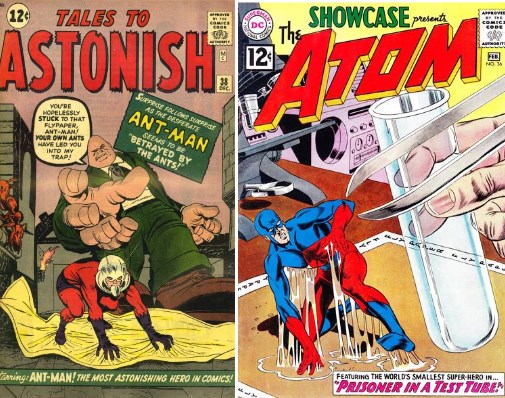 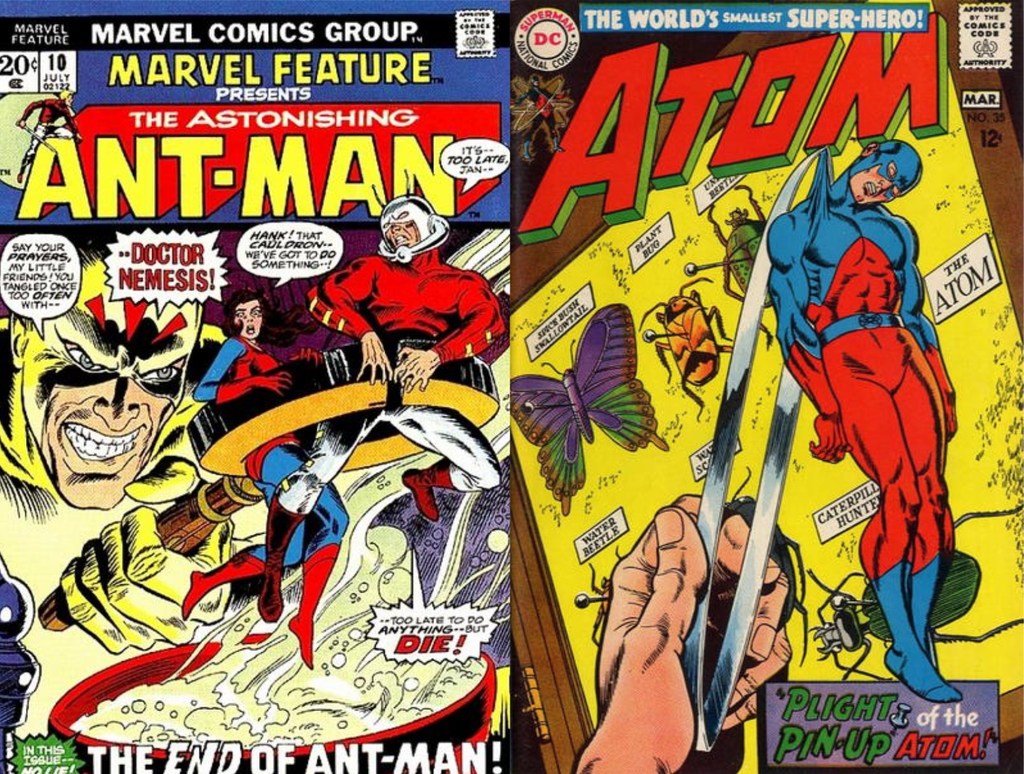 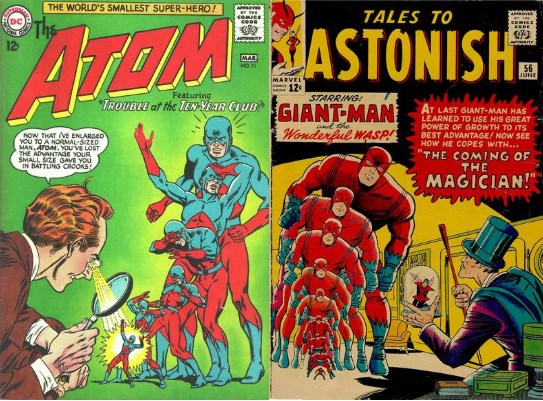 Ant-Man must become lighter when he shrinks - an ant can carry him - so catching him (as in Hoy's image top p.2) need not be all that difficult for ants.

Also, ants have the skeletons on the outside so they are well-armored.

Perhaps he had a fail-safe in his size and weight device that prevented him going over 180 pounds.

In the Showcase issues, at least, Atom was described as having "atomic muscles" and was sometimes using strength beyond that of a full-grown man.

Did Ant-Man always have his full-size strength? I don't remember it coming up by the time I was reading him (which wasn't long after his beetle adventures, but I didn't get those off the rack). The Atom used it a lot, but he had to crank it up if he wanted it, as it wasn't his default setting. The Atom's molecular control made that seem more plausible, but in Ant-Man it just seems conveeeeenient.

The Atom's molecular control made that seem more plausible, but in Ant-Man it just seems conveeeeenient.

Wait! You mean Atom had control over his molecules, like The Flash? Was there a sale somewhere on molecular-control powers and the other JLAers missed it? Well, now we know why no one turned The Atom into a puppet -- it wouldn't stick!

Also, The Atom had a power he never used: Shrinking people and objects without the white dwarf matter. Because they'd blow up! He could have been the most mysterious mass murderer in history!

Green Lantern could do that too. And change size. Come to think of it Martian Manhunter could change into other heroes (except Superman since somebody used gold kryptonite on that for) so he could use any of their powers. Maybe in some of the stories where he doesn't appear we don't see him because he's actually there but impersonating somebody else?

Didn't objects he tried to shrink even with the white dwarf matter explode? Or did he fix that after that first story? Was it ever explained why he didn't blow up? Maybe Mopee got mixed up and contacted the wrong hero. 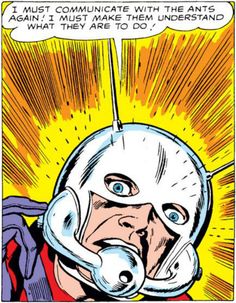 The sort of person who says things like "Behold --- Lightning-bolts --- crashing out of my nostrils!" perhaps?

Er, I'm talking about the writer of course.  I don't mean to imply that Ray Palmer had a second secret identity as Lightning Nostril Man.

If The Atom had a third identity as Lightning Nostril Man, that would be awesome.

How could they be expected to write 60s teenage dialogue when they were apparently having trouble writing 20th century adult dialogue? Did Stan have Thor talk like that so he'd have an excuse to use that kind of speech? Did it start out as a joke on lests and beholds and zounds?

...I'm going to re??-ask whether the Atom's Convergence mini involves that Taiwanese man who was the Atom briefly during the 00s . If it does I just may buy it !!!!!!!

...I think , actually , that both DC and Marvel , due to the memory of the Code-conjuring controversy , tended to err when needed then on the side of a more " correct " English ~ I recall some DC corporate?? from the post-Code era saying something like " we show the mother's' groups , the PTA , our grammar and spelling is proper..."  ! That does leave out Ben Grimm and the like saying " mebbe " , say , but I suppose it didn't working out character/vernacular mispellngs , especially for " character/supporting " parts , as it were , compleat-ly:-)!

Writers are told to read what they write, especially their dialogue, out loud to see how it's going to sound. If they'd done that in the 60s a lot of people would have been looking at the writers funny.

Lee Houston, Junior replied to Steve W's discussion A Cover a Day
"Thanks Jeff on Earth J. I'll have to keep an eye out for it but how can it be…"
6 minutes ago

Tracy of Moon-T replied to Jeff of Earth-J's discussion Swamp Thing
"Lady Jane was an elemental like Swamp Thing. Her tragic circumstances shaped by how women and…"
1 hour ago

PowerBook Pete, the Mad Mod replied to The Baron's discussion Movies I Have Seen Lately
"It's like their Columbia musical shorts of the later Curly years but expanded to triple…"
1 hour ago

Tracy of Moon-T replied to Jeff of Earth-J's discussion Swamp Thing
"One of the couples making out in the alley at Mardi Gras is Batman and Joker. "
1 hour ago

Jeff of Earth-J replied to Jeff of Earth-J's discussion Dark Shadows
"Earlier in this same episode, Willie reached out to steady a wobbling tree while passing through…"
1 hour ago

Jeff of Earth-J replied to Steve W's discussion A Cover a Day
""And I wish Marvel would collect Super-Villain Team-Up..." Granted. They collected the…"
2 hours ago

Jeff of Earth-J replied to Wandering Sensei: Moderator Man's discussion What Comic Books Have You Read Today?
"Today's reading has so far all been Sandman adjacent. NEW YORK WORLD'S FAIR COMICS #1:…"
2 hours ago

Tracy of Moon-T replied to Jeff of Earth-J's discussion Swamp Thing
"We have learned that Constantine has demon blood. Now we know that Dark Conrad is part of the…"
2 hours ago

JD DeLuzio replied to Jeff of Earth-J's discussion Dark Shadows
"Collinwood had a Jungle Room. Who knew?"
2 hours ago

Jeff of Earth-J replied to Jeff of Earth-J's discussion Ultraman Tiga
"FUGATIVE FROM THE MOON: "TPC's Moon Base Garowa is destroyed. It's lone survivor,…"
2 hours ago