Even Rob Liefeld could create new characters. It's just that most of them were terrible.

Now we've entered in to this weird era where the companies don't want new characters because it opens up a Pandora's box of royalties issues and potential lawsuits. They only want legacy characters and alternate iterations of existing characters so the can retain complete ownership.

My sense is that most writers are just looking to try new things with characters who have been around for so long that there isn't anything interesting that can be done with them. This forces them to try risky things that often backfire.

We also got characters named things like Cable, Skids, and Husk. Are all the good names taken or are some people just really bad at naming characters? Like Robert E. Howard had monsters named Thag, Thak, and Thaug.

Or the old characters are set in a brand new universe where either variations of the old stories or entirely new stories can be told.  Considering that most of these characters have been around at least 40 years, as with Wolverine & the Punisher, or are now pushing 80 years, as with Superman, Batman & Captain America, it's not much of a wonder that we now have so many multiple universes featuring them or other characters based on them.  Once even the notion of a Spider-Woman or Spider-Gwen would have made me gag, but now my view is if someone can tell good stories with such characters and attract a fan base to keep them going, well good for them.  Within the last couple of years I came across James Robinson's Starman series, and managed to obtain the full series through the omnibuses, and, wow, that was a tremendous series that made fascinating and entertaining use of the many characters over the decades that shared the name Starman in DC comics.

Then there were all those monster names Stan Lee came up with in the late '50s/early '60s, some of which were a bit more inspired than others.  Some seem to have been based on the first sound that came out of his mouth while looking at the art and that as far as he could remember had not been used before.  Of course, he did wind up recycling some of those names, most famously the Hulk.

We also got characters named things like Cable, Skids, and Husk. Are all the good names taken or are some people just really bad at naming characters? Like Robert E. Howard had monsters named Thag, Thak, and Thaug.

There's also the matter that, for companies like Marvel & DC, who've been amassing characters of all sorts for many decades, just about every type character one could want to use already exists somewhere in their inventory, if one digs deep enough.  I mean, why create a character like Murmur for a team that already has Persuasion the Purple Girl somewhere on its back bench?  On the other hand, it could be a great creative challenge to try and come up with the one variation on a ice-powered villain or a super-gorilla that DC doesn't already have.

Besides Xemnu the Living Hulk Titan there was a Hulk in a Steve Ditko story that kept coming out of a movie screen.

Like someone with fire powers that can't burst into flames and fly.

There's also the matter that, for companies like Marvel & DC, who've been amassing characters of all sorts for many decades, just about every type character one could want to use already exists somewhere in their inventory, if one digs deep enough.  I mean, why create a character like Murmur for a team that already has Persuasion the Purple Girl somewhere on its back bench?  On the other hand, it could be a great creative challenge to try and come up with the one variation on a ice-powered villain or a super-gorilla that DC doesn't already have.

Or maybe a psi-powered character who's a pre-cog & pyrokinetic instead of the much more frequent telepathy/telekinesis combo!

There are a lot of psychic powers we rarely if ever see. What about someone that can't read minds but can make mental armor to fight other psychics on a psychic plane like Professor X did against the Shadow King? Or track someone by touching or smelling an item they dropped? Dr. Strange had some psychic abilities they dropped when he was boosted to super wizard, like when he followed the trail left by his body being dragged away by Mordo.

“Maybe Stan was a poet and didn't know it.” 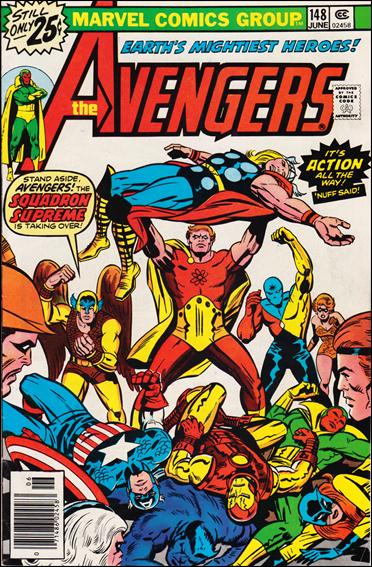 The title's a spin on the Justice League from DC Comics as the Squadron is kind of like...oh...you got that one did you?

This is another cover that I kind of always thought was by Kirby - it's not but Buckler sure is channeling Jack!

Also, I thought this was so like Fantastic Four #249 that I thought Byrne may have swiped it but again - it's not but it's very similar!

Never understood Hyperion's golden-girdle - that must be uncomfortable!

The splash page highlights how George Perez really is finding his groove here - already his art looks so much more sophisticated than when he started on this title - and I always love the roll call listings in the frame!

So, after a short recap we find half of our Avengers defeated and captured by the Squadron and we meet some more of their members in their (presumably) sattelite headquarters.

HawkmanCap'n Hawk, AtomTom Thumb and AquamanAmphibian therefore go up against The Beast and Hellcat while the Whizzer and Doctor Spectrum fight Captain America and Iron Man.

Beast and Hellcat bicker continually - which is quite annoying now.
"I'm a super-heroine now--!"
"I knew you when!"
"Well, nuts to you, buster!"
It's fairly standard hero fight stuff, with Hellcat again probably being far too adept a fighter.
The Beast's blue-furry look has finally settled down into what we get used to and as I've said before, no-one draws Hellcat's cowl as well as George.

We get a quick place-holding scene with Moondragon still badgering Thor as to why a god like him bothers to associate with mere mortals as the Avengers,
"Silence, woman!" - so say we all, Thor, so say we all.

What is nice is t o see Cap and Iron man as a duo - without the arguements or fighting they tend to get themselves into in later years.

These issues are notable for the still present nose on Iron Man's faceplate.

All our Avengers win their skirmishes and everyone teams back together in true JLA fashion as they contemplate the threat of the Serpent Crown.

Another place saving scene updates us on Jan and Hank Pym, ready to be released from hospital where they've been for way too long.
Future strife is hinted at as Hank hesitates and Jan announces she will rejoin the Avengers with or without him!

-and the president is revealed to be a disguised Beast.
Again with this 'master-of-disguise' facet to the Beast - it is annoying.

How does he get the materials let alone the template for the mask and how does he copy the voice/mannerisms etc.
It's a comicbook idea that does not work!
"Good lord! It was all a trick!"

The Scarlet Witch hexes up pot plant that holds the Squadron back as Iron Man fires up a machine that can take the Avengers back to their Earth. (Where did this McGuffin come from?)

The Squadron decide not to follow our heroes as they're mulling over the revelations regarding their world and government etc.
It's kind of a flat ending - just a decision not to fight.

I confess I'm confused as to what this entire battle was all about that the concept of big business and money being a less than noble way to run a world -- is that it?

We get a glimmer of hope of action and plot still to come as we watch the Avengers travelling the dimensions back to their Earth at the close...
(The copy I'm reading - the Serpent Crown trade - has coloured Cap's white sleeves as flesh tones - he looks like he's got a new summer-design.)

We are promised "Next The Grand Finale!" - but I confess I'm not sure who the final battle is supposed to be with..?

As a superhero romp this is kind of okay, the JLA tropes resonate well but I can't help but realise on this read through that there is very little plot here at all!

I've seen the cover credited to Buckler in a checklist, and I think the GCD used to credit it to him, but it currently credits it to Kirby.

20,000 leagues is the distance the Nautilus travels in Twenty Thousand Leagues Under the Sea, not how deep it goes. Wikipedia's page on the book explains the distance is "over six times the diameter" of the Earth.