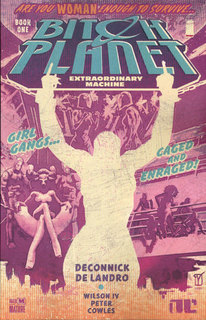 I know author Margaret Atwood (writer of The Handmaid’s Tale) is writing comics now, but I’m still going to call this the comic she would write if she wrote comics. It depicts a future society which is ruled by a patriarchy (the head is called Father) so strict that women who are judged “noncompliant” are sent to a prison planet, colloquially referred to as Bitch Planet. What “dishonors” can result in judgement? Murder, of course--but also disrespect, being a bad mother, seduction and disappointment, emotional manipulation...just about anything a man doesn’t like.

The casual disregard for women’s lives is clear from the start, but it’s brought brutally into focus when Marian, a woman wrongly sentenced, is killed in prison so her ex-husband can keep his younger, more compliant mistress. De Landro’s art has just enough detail to delineate the characters and keep the action moving: backgrounds are frequently minimal. He does a lot with panel design and placement, using a recurring 12-panel grid for things like media reports, reminiscent of The Dark Knight Returns or Watchmen. The pulp comics tone is extended to a final page in each issue offering tacky merchandise for sale, like the legendary X-Ray Specs and Non-Compliant temporary tattoos...a few directly related to the book actually are for sale.  Guest artist Robert Wilson IV turns in a wonderful emulation of old romance comics on the third issue, a character study.

The stories offer a brilliant mix of B-movie “women in prison” parody mixed with trenchant social commentary. It’s consistently fun to read, while being serious at the same time. Very impressive, and I look forward to more.