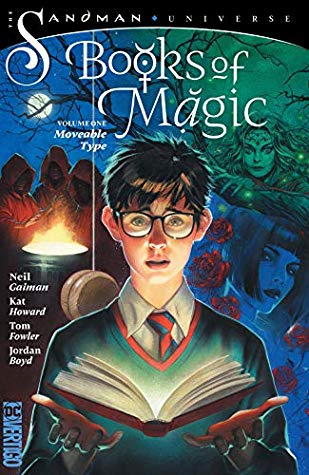 This one opens with a brief history of Tim Hunter's initiation into the world of magic by the Trenchcoat Brigade in the original The Books of Magic miniseries. Then we're back in school with Dr. Rose, just as The Sandman Universe set it up. I am looking forward to seeing the follow up on the other narrative threads that were introduced there in the rest of the series in this universe. I understand now why each of the first series collections begins with a reprint of it: it's like the opening chapter for all of them.

Tim Hunter's story became increasingly complicated over the course of the many series he appeared in. But the core of it was always his struggle to learn about magic and his place in it. And this series begins in much the same place as the original Vertigo series did. Tim is trying to understand magic; he is an outcast at school; his mother is missing, and his father is trying to cope; he's even got a girlfriend, but this time she's black and her name is Ellie instead of Mollie. He's also friends with the homeless woman Mad Hettie, and the yo-yo she gives him turns into his owl protector Yo-yo.

Tim again finds himself under attack by the evil cult The Cold Flame (in fact they are named before any explanation of who they are, a bit of a narrative continuity lapse). There's a frontal attack that he repels with unexpected brute magical force, but he's also surrounded by agents at school; Rose killed a teacher during the Universe story (as well as an agent who has tracked him down and was coming for him at home), and the school librarian is another. He even visits The Dreaming, and meets the new Dream.

He returns to school to find that Ellie has been kidnapped. Rose gives him the choice of using a scrying dish to find either his mother or Ellie--and he chooses Ellie. Lots of plot threads for future stories. The collection concludes with a collection of variant covers, and some Tim Fowler sketches. Fowler is another great artistic match: he's especially good at capturing Tim's gangly adolescent physical appearance, as well as his naivete.