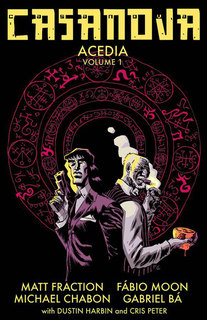 Interdemensional superspy Casanova Quinn comes to this arc (the fourth in the series) on our Earth, with no memory of his past, not even his name. He's now known as Quentin Cassaday, and he's working as a chauffeur and assistant to a powerful man named Amiel Boutique--who has no memory of his life until about age 30. Boutique knows that Cassaday must have a past, in which he acquired many skills (not to mention the assassination attempt that just happened). So he suggests that the two men each investigate the other to get some answers.

Meanwhile the assassination squad known as the Metanauts continues traveling to each dimension, killing the Casanova Quinn in each one. Their story is told in a short backup in each issue written by renowned author Michal Chabon and illustrated by Gabriel Bá. Chabon is such an accomplished writer that it should come as no surprise, but it's still remarkable how well his backups fit with the main story. He completely inhabits Fraction's surreal world.

Casanova's amnesia is a very effective storytelling device. It frees both him and the reader from the need to remember the previous interdimensional craziness in detail, which had become increasingly difficult to follow (and I say that as someone who has been enjoying the series very much). Fraction claims that makes this series new-reader friendly, but I wouldn't go that far. To fully appreciate what's going on around Casanova you have to have some idea of how he got there.