COVER COMPARISON: I like the kind of “DC Silver-Agey” gimmick versus… YUCK!

X-MEN #123: Scott summers and colleen Wing are abducted by Arcade’s garbage truck (“gnnrrr-SFLANNG!”), right in front of Doctor Strange’s sanctum sanctorum in Greenwich Village, attracting Spider-Man’s attention. At the Lincoln Center, Peter, Kurt and their dates are abducted as well. After dinner with Mariko at the Japanese Consulate, Logan is abducted, too. Arcade himself breaches security at the mansion and abducts Banshee and Storm. He even answers the phone when Spider-Man calls with a warning.

The pinball machine depicted on the cover delivers the X-Men into six individual and unique traps. Want details? Read the comics! Suffice it to say that Cyclops escapes his into Wolverine’s, then they are both attacked by a brain-washed Colossus, calling himself the “Proletarian.”

CXM #29: A story in which Colossus visits his home in Russia and which focuses on Colossus’ doubts and insecurities, raised this issues and next, and set in the “near future” between issues #124 and #125.

My first thought was that Classic X-Men cover was capitalizing on Jim Carrey’s catchphrase from The Mask. But it turns out it was published in 1989, while The Mask was released in 1994. So...there’s no excuse, I guess.

However, Beetlejuice which used the same catchphrase came out in 1988!

My first thought was that Classic X-Men cover was capitalizing on Jim Carrey’s catchphrase from The Mask. But it turns out it was published in 1989, while The Mask was released in 1994. So...there’s no excuse, I guess.

Was there an explanation of how Arcade knew about the mansion?

A lot of X-foes knew about it - Magneto, the Hellfire Club, Arcade. Magneto has known since #17-#18, where he took the mansion over. That latter issue was also the first time he created artificial "mutants", as in the Thomas/Adams Savage Land story but a different way.

"Was there an explanation of how Arcade knew about the mansion?"

He was hired by Black Tom Cassidy and Cain Marko, so they told him.

More of a deal was made about how he was able to breach Xavier's security.

\ COVER COMPARISON: We now enter the era of my favorite CXM cover artist, Steve Lightle. Lightle is known for his team work on DC’s Doom Patrol and Legion of Super-Heroes, but I tend to associate him with Classic X-Men. I choose Lightle’s cover over the original.

X-MEN #124: Cyclops and Wolverine survive their fight with the “Proletarian,” but they become separated. Cyclops is thrust into Nightcrawler’s trap (“Death-race”) and Wolverine finds himself with ?Banshee in his (“BattleStarWars: 1999”). Both duos escape their respective traps. Cyclops joins Wolverine and Banshee (who are fighting robot duplicates of Magneto and the Hulk by this time), while Nightcrawler finds Arcade and engages him directly. Meanwhile, Storm has escaped her trap and joins Cyclops, Wolverine and Banshee. The “Proletarian” finds them, but Storm and cyclops snap him out of his brainwashing. At this point, Arcade concedes defeat and lets them go,

The Classic X-Men cover might have been a response to the previous year's Incredible Hulk #340 (F'88) where the Wolverine/Hulk rivalry was renewed in spades! 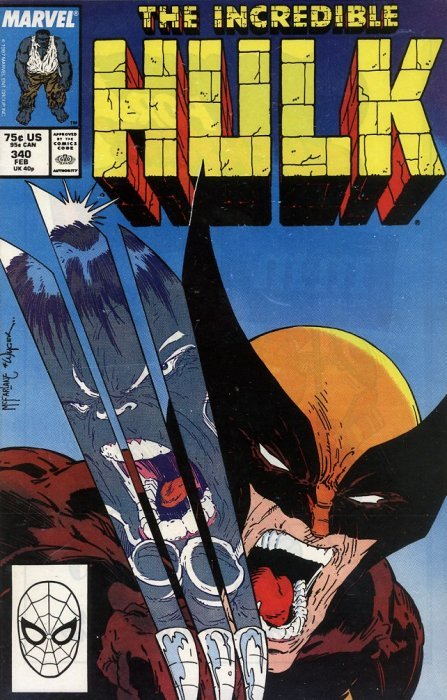 In 1979 Jim Shooter decided that the X-Men were to have an annual. The story takes place in continuity between X-Men #124 and #125, but it really doesn’t matter all that much because it’s completely standalone, no sub-plots from the regular series are advanced. The main purpose of this annual is to attract new readers (perhaps Avengers readers, which is what Arkon was chosen) to the X-Men. Consequently, Annual #4 was not reprinted in Classic X-Men. As a matter of opinion, whereas it works great as a standalone story and introduction to the X-Men, it kind of interrupts the issue-to-issue continuity of the regular series. One other notable feature is that the artist of X-Men Annual #4 was George Perez (inked by Terry Austin). When one thinks of all the team books Perez is renowned for today (Avengers, JLA, Fantastic Four and especially the New Teen Titans to name a few), it’s surprising this is his only work on an X-Men title.

There's something seriously wrong with the leg on that warrior in the background.