I was answering questions on my tablet tonight instead of my laptop, and as I thought I was posting the answers, I hit something that said I wanted to delete the whole thread. And since it was waiting on me to post, and I wasn't used to doing this on the tablet, I clicked OK. And then it stalled, I realized what I'd done, and hit Cancel! Cancel! as often as I could...but it was too late. The thread was gone -- not just the post, but the entire thread -- and I don't see any way of bringing it back. I'm going to email Ning's support team to see if there's any way of retrieving it, but I think it's gone.

In the meantime, all I can do is apologize profusely. Using my laptop, before I do any more damage. I'm so sorry, guys. Believe me when I say I'm mortified.

I'll recap the questions I've been asked down below, so we can proceed, but hopefully I'll get word from Ning on whether anything can be done in the next day or so.

OK, since Luke had the foresight to keep a copy of the rules handy, I can reproduce them here...in bold!

I thought this game might work. The player holding the chair selects a character. The challenge for the other players is to guess who the character is. They get twenty questions.

All questions have to have to be framed so as to allow the answer "Yes" or "No". The chair can give extra information if he or she chooses, and frame an appropriate response if neither answer fits.

Players may only ask a fifth consecutive question if four hours have passed since their last one. (Since the guess, not the answer.) The first player to guess the answer takes the chair.

(revisions made to rules)

Was this character always a DC (National or All-American) character, or did he originate at another publisher that DC acquired?

14) Was this character always a DC (National or All-American) character?

Is it Animal Man?

15) Was this character always a DC (National or All-American) character?

In the Silver Age he became an honorary member of the Legion of Super-Heroes, and a member of the Nightwing and Flamebird team (Q2). He is a male hero who had his own title at DC pre-Crisis, and it's sort-of correct to say he had superpowers (Q7).

Why did I think Rob's character might be Jimmy? His clue was "this next character uses flash photography". It put me in mind of this: 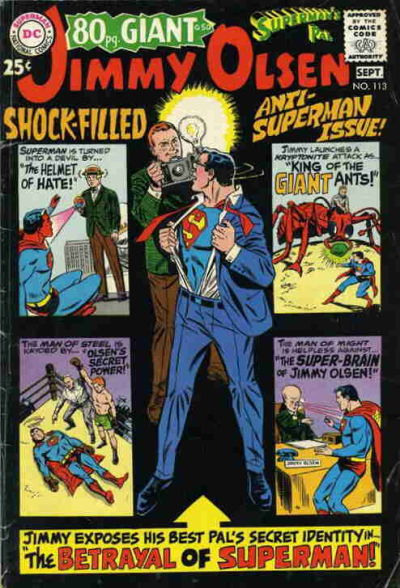 Yep -- it wasn't until I went back to that clue -- and your phrasing that indicated that he was first named in a different issue than he first appeared -- that led me to Jimmy. (Of course, that second fact also led me to Animal Man -- and calling him a "mystery guest" led me to the Phantom Stranger, who also had a feature pre-Silver Age, but not something you'd call Golden Age.)

And by flash photography, of course, I was hinting that not only was Johnny Chambers a photographer, but he also has powers similar to the Flash!

Anyway, on to the next... I'm sure I'll be flooded with questions about our next contestant!

Just bumping this to see if anyone has a question they want to ask. If the game's played out for a while, that's fine too.

Is the character male?

1) Is the character male?