Interesting choices, Henry but they only reminded me of why some of those Silver Age stories are great. There were a lot of Superman tales that featured Perry White and several of them are classics. If we consider Perry as a fatherish-figure to Superman/Clark, then his "betrayal" is less silly than a real "Oh-My-Gosh!" moment.

And yes, the Adventure cover is silly but many of them were but there was a mysterious reason behind most of them. The reason may have been convoluted and way out there but it was still more than what it seemed.

And they made great covers!

Perhaps we take our comics a little too seriously nowadays.........myself included! ;-)

"Did Weisinger really say that?"

I'm not sure anybody actually said that. But after reading multiple interviews with different people who worked for DC in the 60's, there often seemed to be among some editors an almost self-loathing attitude which they lived with by treating their freelancers as badly as possible.  I probably coined the phrase myself, partly as a joke (partly not) to sum up the attitude I sensed was coming thru via those interviews... (Not only do they look down at their own product, and their readers, but they're arrogant about it, too.)  Just take it as a joke, if you can...

Weisinger seems to have been something of a monster to work for alright.  Nevertheless, the comics produced on his watch are an undoubted highpoint in US comics of the 20th Century.  (Undoubted by me, at any rate! :-) )

They were comics for kids and they had a huge mass appeal, and I'd say that they gave the kids exactly what they wanted.  To produce comics that were more 'sensible' might have worked against those great acheivements.  Weisinger has to take some of the praise for that.  I've no doubt the ideas, the fun and the often faultless execution artistically were all the work of the writers and artists, but Weisinger must have done his bit to keep things going in the right direction.

I'll not defend a workplace tyrant.  I'm sure Weisinger could have produced comics just as good without being a complete b******, but the comics themselves are simply marvelous.  Few mass-produced serial entertainments are so consistent and sustained and of such high quality, and have left such a mark on the culture.

Weisinger's faults as an editor and a human being have been well-documented. He was the Anti-Stan Lee as far as personas go. Heck he was the Anti-Julius Schwartz, for that matter. How he treated E. Nelson Bridwell, Roy Thomas, Jim Shooter and Cary Bates (the latter two as minors) is certainly cringe-worthy.

But do we taint the comics themselves with the behind-the-scenes drama? Should I not enjoy The Adventures of Robin Hood because of Errol Flynn's trials? The Road To... films because of Bing Crosby's failings? Charlie Sheen? Lindsay Lohan? Matthew Fox was arrested recently. Does that affect LOST? The criticism about Frank Miller's recent statements should prevent us from remembering his runs on Daredevil?

One thing that I'm sure of, IMO only, was that Weisinger truly cared about producing successful, profitable books regardless of his methods and he wanted Superman's world to stay interesting and exciting. And he succeeded more than he failed. And his work has never fully left us.

Bizarre as it may seem, decades later, in the long run, it's the Weisinger LEGION OF SUPER-HEROES that remains my favorite.  Especially the episodes by Shooter-Swan-Klein (and Shooter-Mooney).

Well, I didn't start buying new comics until Fantastic Four #55... but I found this one in a used comic pile at the school carnival fundraiser in 1965 and so I was moved to buy it and the others with it... but just look at it.

You've got this giant robot thing crawling over the city after a ragtag group of heroes, and one has a strange walki-talki in his hands.  And that title... "And a Blind Man Shall Lead them...."   WOW!

Runner up:     Uncanny X-men #174   Not actually from the silver age, but the most symbolic cover of my age!

I have four for you. The original Death of Superman imaginary story, my first JLA (and first exposure to Flash and GL), and my first Fantastic Four and Spider-Man comics. 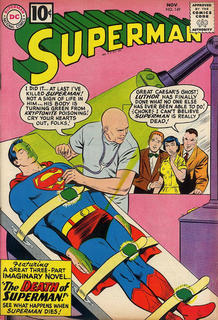 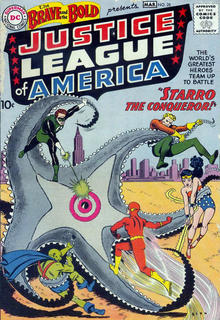 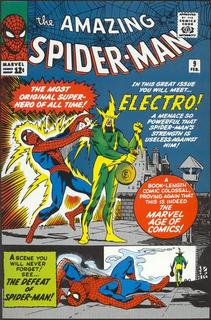 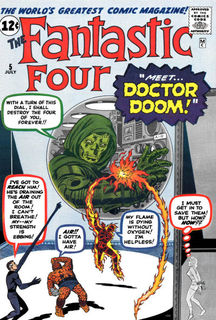 Jeff of Earth-J replied to Jeff of Earth-J's discussion Tales to Astonish
"The Executioner doesn't have his axe. Ooh, that could be a plot point in my head canon fanfic…"
5 minutes ago

Jeff of Earth-J replied to Steve W's discussion A Cover a Day
""I'm not sure if the plot point of who the Valeyard, the prosecuting Time Lord, turned…"
9 minutes ago

Luke Blanchard replied to Jeff of Earth-J's discussion Tales to Astonish
"The Executioner doesn't have his axe. It was taken off him when he was exiled to Earth in…"
3 hours ago

Richard Willis replied to Steve W's discussion A Cover a Day
"I don't have a transition cover. This final cover from me is not quite a courtroom but…"
4 hours ago

Lee Houston, Junior replied to Steve W's discussion A Cover a Day
"It is now after midnight where I live and since I will be away from my computer for most of Tuesday…"
7 hours ago

Jeff of Earth-J replied to The Baron's discussion Movies I Have Seen Lately
"They probably would have written this down. Ya'd think. This sounds like the…"
11 hours ago

Richard Willis replied to Captain Comics's discussion Comics Guide: Jan. 30-Feb. 5, 2023
"And when did Marvel start spelling the title "Captain Mar-Vell"? My guess would be to…"
13 hours ago