The "Supergirl -- Season 5 SPOILERS!!" thread was starting to turn into a "Crisis on Infinite Earths" thread, so I figured somebody ought to start one.

"Crisis on Infinite Earths" is this year's annual Arrowverse crossover on the CW, which will include Arrow, The Flash, Legends of Tomorrow, Supergirl and Batwoman.

Here's a comprehensive rundown of what is known about it, from Too Fab: "Everything We Know About the Arrowverse 'Crisis' Crossover: 'Kingdom Come, Burt Ward, Anti-Monitor and More!"

I wonder what kind of condition Phyllis Coates is in?

Oh, another thing I'd love to see, and it would be easy: Helen Slater as a middle-aged Superwoman from whatever earth the 1984 Supergirl took place on. It probably won't happen, but Slater is already a regular on Supergirl as Eliza Danvers, so how hard would it be? Also, Slater played Lara Zor-El on Smallville, and could add that character to the mix. That would be so fun, even if it was just a brief bit of Supergirl seeing all three characters at once, giving the audience a WTF look, and flying off.

I mention that in my column, and here's another: Erica Durance in three roles. Yes,she's returning as Lois Lane from Smallville. But she's also played Alura Zor-El and Agent Noel Niell on Supergirl. How about all three of those characters meeting up? My fanboy head would explode.

Then there's Dean Cain and Teri Hatcher, both of whom have multiple Super-roles. They were Superman and Lois Lane on Lois & Clark, of course, but they've also had roles in the Arrowverse: Cain as Jeremiah Danvers, and Hatcher as Rhea (Mon-El's mother) on Supergirl.

Break out the old costumes, I say! 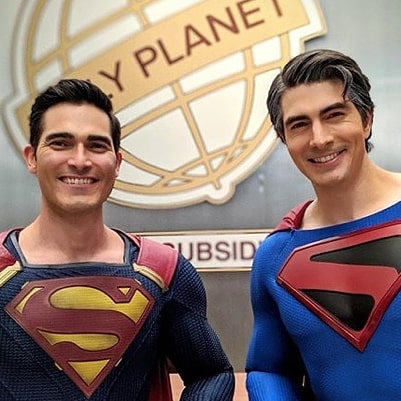 The CW's Crisis on Infinite Earths is here!

Why aren't we talking about it?

Although there's a SPOILERS warning in the title of this thread, it doesn't hurt to add one more, hey?

A few thoughts to add:

The first part seemed a little weak to me. I really loved Ollie’s last stand (reaching back for an arrow that wasn’t there...whoa!), and on the lighter side, I loved Sarah and Ray at trivia night. But so much of episode 1 was (perhaps necessarily) clogged with exposition that I feel like the story never got rolling. Most of the joys of the first episode were pure easter eggs -- Robert Wuhl! The giant tuning forks! -- whereas I thought episode 2 was a little more focused, and had more humor and heart.

Ep 2: Loved seeing the various Supermen...and Tom Welling, as an ex-Superman, was even better. (“I’m still stronger.”) And I was thrown for a loop that the Kevin Conroy Batman had gone fully around the bend. (I love that Kate has nabbed his kryptonite...didn’t see that coming.) The Lazarus Pit has always seemed like a giant cop-out since Ollie & his friends started using it, but I *did* really like seeing Barry SO uncomfortable with Constantine’s demonic chanting. He’s seen a lot, but at his heart he’s such a sweet, sheltered dude.

Loved the baby Jon gags. (And wow, Jason, from Superman Returns, gets a shout-out!) The “paragon” thing is little corny, but at the same time, it gives the heroes individual quests, and it puts the focus on people, not objects, which is better storytelling than a cosmic scavenger hunt.

After a shaky start, I can’t wait for tonight’s episode.

This was in the opening pages of Crisis on Infinite Earths #11 (February 1986).

I definitely wanted him to eat that kryptonite, too!

Permalink Reply by Doctor Hmmm? on December 10, 2019 at 5:54pm
I think a lot of us "of a certain age" had exactly that thought for a second or two.

Well, he was in his secret identity.

Randy Jackson replied to Captain Comics's discussion Bond #4: 'Diamonds Are Forever'
"I do agree with you Commander that the Moore films tended to be sillier and relied more on stunts…"
4 hours ago

Jeff of Earth-J replied to Jeff of Earth-J's discussion Tales to Astonish
"THE INCREDIBLE HULK #102 - "Big Premiere Issue!" The conclusion of this story takes me…"
6 hours ago

Steve W replied to Steve W's discussion A Cover a Day
"Allow me to introduce another nurse. Here's Linda Lark."
7 hours ago

Jeff of Earth-J replied to Steve W's discussion A Cover a Day
"Before someone beats me to it..."
8 hours ago