Daredevil Questions AKA I Was Wondering #20 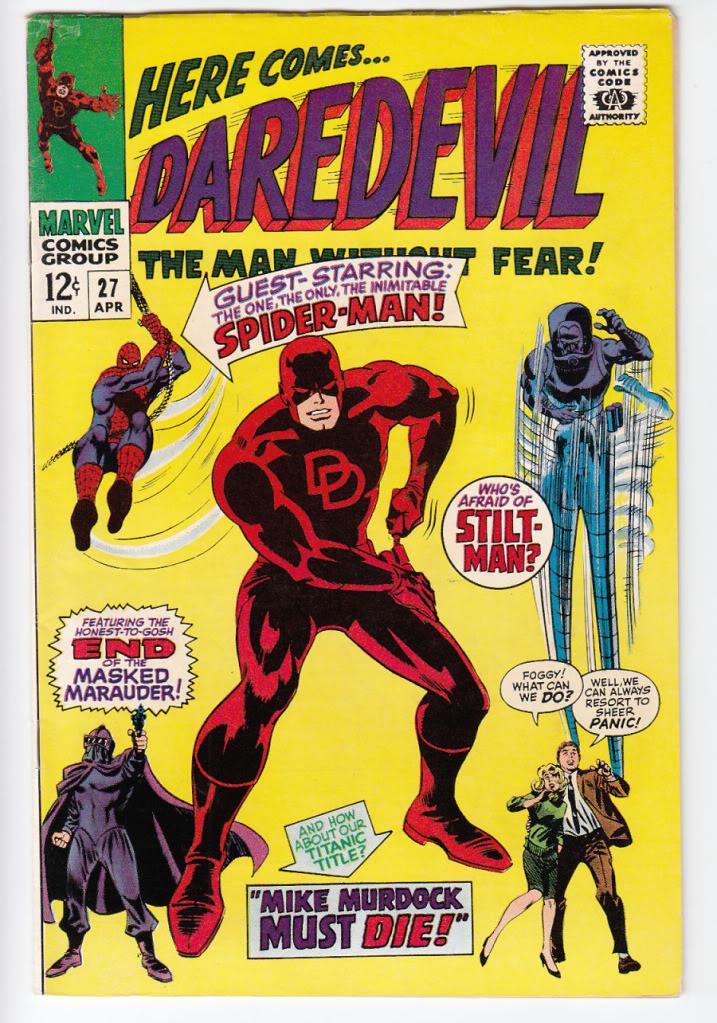 Daredevil was always a favorite of mine and easy to collect. Unfortunately he spent his Silver Age as a definite Marvel B-Lister and a weaker version of Spider-Man. His title was never one of Marvel's best sellers and was almost cancelled at least once. Of course, he rebounded with Frank Miller's brilliant run in the 70s and is currently one of the best books out there.

However there are several discrepancies and oversights (and outright weirdness) in Hornhead's backstory and some definite questions, so:

That's my testimony. What's yours?

I like the Mike Murdock thing, so there! I don't know if Lee was going for understated parody at that point, but that's what he and Colan were effectively doing and I find it fun. 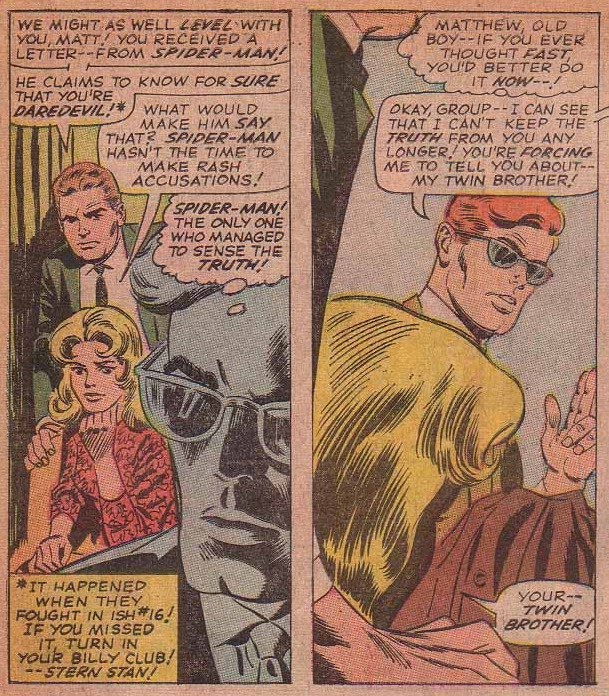 Now, Foggy, being a lawyer, should have asked he had never heard Matt utter a single word about a twin brother and asked for proof like a photo or something along that line. Or even checked Matt's records for any mention.

And what about Karen? Basic small talk staple is the siblings one.

Karen: "so, any brothers or sisters?"

He goes further! He actually has them meet Mike! Why would you need further proof when you've met the guy?

"I'm sorry, Mike! I don't believe you actually exist because I haven't seen your VACATION PHOTOS and BABY PICTURES!"

Seriously, yes, Foggy would probably have looked into it figuring something about it smelt.

Permalink Reply by Richard Mantle on December 13, 2013 at 1:17am
Sorry to butt in guys but - you're discussing how clever Foggy is?
He's the guy that thought Karen would believe HE was DD by wearing a the reds and fighting Gladiator. Not that bright.

I liked Mike Murdock too.  Silly but fun.

Why did young Matt Murdock keep his heightened senses a secret? Did he tell his father? Did the doctors know? Enhanced hearing and smell must have quite painful in a hospital where normal people can't sleep! It's almost like young Matt was planning for a super-hero career!

He kept it a secret so he could secretly spy on people! I dunno.

Why did Matt fall in love with Karen Page? How did he know how beautiful she was? Did he do the "feel-your-face" routine? Was it a purer love or were his hormones linked to his radar sense?

Reminds me of BMB's run on DD when Foggy asked Matt how a blind man kept dating women who looked like supermodels. He may not have exactly know how beautiful she was, but he would certainly attract a good looking woman. He is a good looking guy, and a rich lawyer.

Who was Daredevil's greatest Silver Age foe: the OWL or the JESTER? I'm assuming that the Owl was designed to be (a blind hero versus a night predator) but the Jester made a lot of appearances! Unfortunately, the Owl was never that impressive (he can glide!) and the Jester was always a bargain basement Joker!

Dunno, but The Jester was always my favorite.

Was the Man Without Fear Marvel's second best non-super fighter after Captain America? Where would he rate against the Black Panther, Nick Fury, Ka-Zar or Hawkeye in hand-to-hand combat?

I think the Black Panther could probably take DD. I'll take DD over the rest though.

Was his blindness a factor as to why it took so long to get animated? They couldn't or wouldn't show a person with a disability, regardless of how he overcame it? Or were they afraid no one would relate to him?

I think you nailed  up above really. He wasn't a popular enough to warrant animation.

Neat fact: When they made The Trial of the Incredible Hulk TV movie, with Rex Smith as DD, Stan Lee saw that the mask had no eyeholes and asked why. They said that it was because he was blind. Yeah, said Stan, but no one was supposed to know that!

Daredevil is actually my favorite Marvel hero, and man I was so disappointed in his depiction in that Hulk movie.

Was Matt a rich lawyer? I don't remember him being that wealthy. Foggy had money and Natasha had money, but Matt? I don't think so.

He would have to have a decent cash roll. He owned his own place in NYC. He seemed to spend half of his days in costume over lawyering. Those billy clubs and costumes aren't cheap. You never heard him wondering how he would make rent ala Peter Parker. Or any other money problems for that matter.  Plus being partner gave him a share in whatever Foggy brought in. He isn't Bruce Wayne rich, but he certainly well-off.

Matt was poor in his childhood.  As an adult he owned a New York Brownstone.  Even in 1960's dollars, that costs one heck  of a lot.  I'd say being a lawyer paid quite well.

Could he have possibly won a settlement over his accident? They were transporting nuclear material through the city and at the first sign of trouble, they throw it out the back door!! That can't be regulation!

Nope.  Jack Murdock died years after the accident, and they were still poor.  Matt went to college and law school on scholarship.

It was later suggested by Frank Miller that Jack Murdock had sued and lost.

Could he have possibly won a settlement over his accident? They were transporting nuclear material through the city and at the first sign of trouble, they throw it out the back door!! That can't be regulation!

I think my favorite DD villains are the Purple Man and the Gladiator. They are both interesting and unique. Other than them, the others were either lame or imported from other titles. The Jester never thrilled me. He's too derivative. This virtual void of impressive original enemies points out how much Ditko and Kirby had to do with the creation of the strong villains in Spider-Man and the Fantastic Four. IMHO the Kingpin was the only decent villain in Spider-Man after Ditko left.