Doctor Who Reactions: "Fury from the Deep"

When I watch Doctor Who on television (particularly the longer serials), I prefer to watch one episode each night, but listening to audio recordings of the missing episodes, I have adopted a “more is better” approach. It’s easier to keep track of the characters and plot threads in a marathon session than it is on a day-to-day basis without the visuals. Our Thanksgiving road trip was three hours, just exactly enough time to listen to all six episodes of “Fury from the Deep” plus the annual listen-to of “Alice’s Restaurant” by Arlo Guthrie.

It’s too bad this one is numbered among the missing (entirely missing, in this case, except for a few random scenes), because I really enjoyed it. It features a lot of good, solid story structure, the introduction of the sonic screwdriver and the departure of Victoria Waterfield. The threat this time is a sentient form of seaweed attacking a refinery on the south coast of the North Sea in the present day. The seaweed produces a mysterious foam and is also capable of stinging people, putting them under its thrall. The thralls are also capable of expelling a debilitating black gas from their mouths; very creepy judging from the photo montage on the CD cover. The goal of “the weed” (a lot of unintended drug humor results from constant references to “the weed”) is to take over all of Britain, perhaps even the world.

The introduction of the sonic screwdriver is the “gun on the mantelpiece in scene two” as the Doctor explains its operation to Jamie. An astute viewer (although perhaps not the show’s original intended audience) might guess the resolution of the threat when, in a later episode, “the weed” mysteriously retreats from the sound of Victoria’s scream. Speaking of foreshadowing, the Victoria’s departure is also presaged throughout. From the very first episode, when the three companions are mistaken for saboteurs, Victoria laments why they can’t "ever go someplace pleasant.” I can clearly visualize the opening scene of the first episode of “The Tomb of the Cybermen” in which Victoria is ushered into the TARDIS by Jamie and the Doctor, and I am glad to report that she was given a proper send-off, much better than that of Dodo, who was unceremoniously written out between episodes of “The War Machine” without even a proper goodbye.

You know how some of the DVD releases give you the option of watching certain scenes with the original special effects or enhanced with CGI? That’s the kind of switch I have in my mind’s eye visualizing these audio only episodes. The sixth episode, for example, features the Doctor piloting a helicopter in an extended comedic scene. (At one point, the Doctor remarks, “That’s funny. I was under the impression it wasn’t possible to loop-the-loop in a helicopter!”) I imagine the scene was filmed with shots of an actual helicopter interspersed with close-up of the cabin (or cockpit, whatever), but I visualize the scene both that way, and as if it were filmed today. Incidentally, good use was made of this helicopter throughout filming as it was also used in episode one to lower the TARDIS to the surface of the sea (where it floats), as if it were “coming in for a landing” rather than materializing.

One thought strikes me as the Doctor and Jamie depart in the TARDIS, leaving Victoria behind. I haven’t yet started listening to “The Wheel in Space,” but unless it picks up immediately from the end of “Fury from the Deep,” this would be the perfect spot to slot “The Two Doctors” into Second Doctor continuity! Unfortunately, there’s a bit of dialogue from “The Two Doctors” about Victoria being off studying graphology (or some such nonsense). She stayed behind with a couple named Harris. If that line had been about Victoria staying behind with the Harrises it would have been elegantly perfect!

I agree - this is one I wish still existed. The fews shots I have seen make it look quite interesting.

"If that line had been about Victoria staying behind with the Harrises it would have been elegantly perfect!"

Yes. WHY didn't they do that?  (Qas it Robert Holmes just trying to piss off fans?)

I just added some thoughts along these lones to "The Two Doctors" discussion.

I agree - this is one I wish still existed. The few shots I have seen make it look quite interesting. 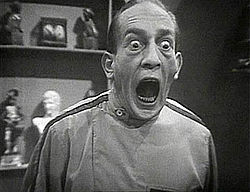 That's worth the price of admission, right there.

I would love to see this. I wish I had been keeping up with the audio releases, but they're kinda pricey.

Also, FYI, "Sergeant Fury from the Deep" is a Googlenope.

Is the full soundtrack on this recording? Could this story possibly be animated like "The Invasion"?

Full sountracks exist for all of the "missing" Doctor Who serials. There's no reason all of them couldn't be animated. (That guy above is either Oak or Quill, two of "the weed's" thralls; he's about to spew debilitatying gas from his mouth in this shot.)

I do that when I eat garlic fries.

Except for the "mouth" part.

Victor Pemberton, author of this story, and one of the few people to have written for and acted in Doctor Who, has died.  He was an extra in"The Moonbase".

(As far as I know, the other two were Glyn Jones, who wrote "The Space Museum" and acted in "The Sontaran Experiment", and Mark Gatiss, who just won't go away.)