Taking a break from the Pertwee era, as the latest DVD releases arrived yesterday, and I had the day off, so I had me a little Doctor Who mini-marathon.  We start with a Fourth Doctor story, one that was fairly troubled behind the scenes, as the director got fired and/or quit partway through and his duties had to be taken over by Graham Williams.

1)Interesting outift they had on Lalla Ward, here - sort of a grey maternity dress.

2)Ah, yes, this was during the David Brierley period for K-9. No offense to Brierley, but no one sounds rights to me as K-9 besides John Leeson. That siad, they made good us eof the dog in this - at least his batteries weren't running down every five minutes.

3)Drug smuggling was an interesting idea for them to tackle in what many people still thought of as a "kid's show".  I thought they carried it off fairly well. I was reminded of a stoner or two that I've known over the years - the sort of guys that, if you asked them to look out the window to see if it was raining, would need to smoke a joint first.

4)Tryst's accent was a bit too much - even if, as I suspect, it was meant to be an affectation onthe character's part.

5)Apparently the backgrounds on the CET were left over scenery from Space: 1999.

7)Cliffhanger:  A Muppet Mandrel appears through the hole in the bulkhead!

1)Note that when the Doctor puts the bit a bulkhead back inplace, there is clearly someone's hand visible behind the scenery helping shift it back into place.

2)The scene where the Doctor runs through what appears to be the same passenger area several times is reminiscent of the old cartoons where characters would chase each other past the same scenery over and over again.

4)Cliffhanger: The Doctor and Romana go into the CET!

1)Rigg's descent into lunacy is well-done, but kind of disturbing at the same time.

3)Cliffhanger: the Doctor vanishes as the ships separate!

1)Not a big thing, but Dymond and the Doctor can't seem to agree on how to pronounce "Hecate".

2)"Go away."  My favorite scene in the whole thing - Baker underplaying (for once) to convey his contempt for Tryst and his self-justifications.

Not a bad little story for what was apparently a "Nightmare" for those who made it.  Suppsoedly the costume lady had "I surivived the Nightmare" tee-shirts made up for the cast and crew afterwards.

Romana (specifically Romana II, Lalla Ward) has long been a favorite companion of Tracy’s (although “companion” isn’t necessarily the correct term because Romana is, more often than not, more competent than the Doctor; “colleague,” let us say), but she’s never been one of mine… until last night. I suppose part of the reason is that we’ve never watched long stretches of either of the Romanas back-to-back, but it certainly is refreshing to see the Doctor intellectually challenged by a thinker rather than sheparding a screemer.

Regarding Lalla Ward’s outfit, I half expected her to break into “It’s a Hard Knock Life” as her audition for the road company version of Annie.

The Mandrels reminded me of the “hot dog monsters” [I know] from Terror in the Aisles.

I just chalked “Hecate” as another one of those odd-sounding (to American ears) pronunciations such as the way they pronounce “omega” and “estrogen.”

Not familiar with Terror in the Aisles.

Neither am I, but I am familiar with hot dogs and monsters, so I can make a pretty good guess at what a "hot dog monster" would look like.

Terror in the Aisles is a compilation of “shock” moments from popular horror films and is narrated by Donald Pleasence, but what I really meant was It Came From Hollywood, a collections of clips from B-films hosted by popular comedians (a sort of pre-MST3K). In one section, hosted by Gilda Radner doing her little girl persona IIRC, she referred to the on-screen creature as a “hot dog monster” (because it had things that looked like hot dogs hanging from its face, as did the Mandrels. Google both moves for more info.

I wonder if the "hot dog monster" comes from The Horror of Party Beach?

Good call!  Personally, though, I'm more of a fan of the "cucmber monster" from It Conquered the World. 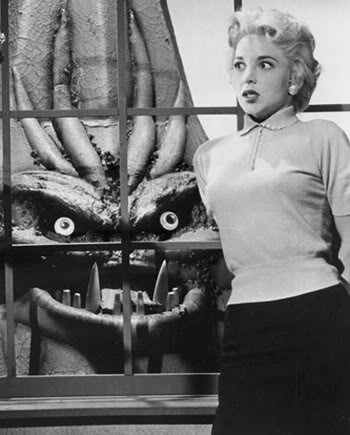