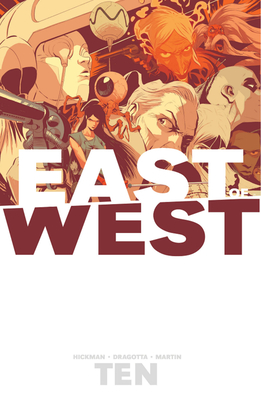 The end of the series is finally here. Having been promised the end of the world, I expected complete annihilation, even if I wasn't sure precisely what form it would take. It certainly starts out as expected, with a massive battle between the forces of Archibald Chamberlain, President of the Confederacy, and Premier Xiaolin Mao, leader of the PRA (and wife of Death). The battle is protracted, with a series of surprises: each side seizes victory from apparent defeat, more than once. In the end Mao's forces lose, but the body count is so high that it is not much of a victory.

Mao herself is saved, courtesy of an intervention by the Kingdom. Despite his victory, Chamberlain and his hostage Bel Solomon both fall in a showdown with the last remaining Texas Ranger. The Four Horsemen have a final battle in the Valley of the Gods, which leaves only Death standing. At Armistice another great treaty is signed: every end is also a new beginning. Babylon's AI finally confesses that he was programmed to show him the world in a certain way--as a broken world that needed to be destroyed--but because of a promise made to his father, Death, he tells Babylon to take off the AI helmet.

This is the true resolution. Babylon finally sees the world as it is, instead of the desolate apocalyptic landscape which the AI had been programmed to show him. His mother loves him, and love is the great organizing principle of the world. The world of the series has ended, but a new one has risen in its place. It is not the expected ending for the series--which would have involved ever-escalating battle, culminating in explosions and a white screen--but a more realistic one. The world does not end: it continues, older and wiser, and ready to move on to a more realistic status. The series stopped using subtitles for the collected editions awhile back. But this one could have been "The End," or possibly "An End and a Beginning."