Fairest Vol. 4: Of Men And Mice 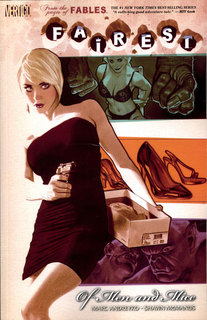 Fairest Vol. 4: Of Men And Mice

Can't go wrong with a Ciderella story, although this one is not quite the equal of the two miniseries that feature her (it does have the advantage of McManus's art, making the three stories visually consistent). It ties into the main Fables timeline, taking places after the "Camelot" storyline, issues 131-137.

The big mystery is an assassination campaign against several leading Fables, conducted by a new human-rodent hybrid. What are these mice-men, and who are they working for? The answers lead back to Cinderella's origin, which is one of the best parts of the story Nice to meet the Fairy Godmother in her prime, and to see her back in action at the end. Although the focus is firmly on Cinderella, two male characters play an important part: Marcel, one of Cinderella's original mice coachmen; and the Hindu god Ramayan (who is depicted with blue skin, common in images of him).

The story doesn't fully tie in with Fables until the end. The true villain engages in an effective deception to place the blame on a seemingly obvious target. Nicely done, although the story as a whole is rather slight. You do get lots of mice fight scenes, but I suppose series like Mouse Guard and The Mice Templar have nothing to worry about.