Sept. 30, 2021 — In the Long-Before time, when there were only three TV networks and boredom stalked the land, September was the month of renewal. Yes, it was dreaded for the beginning of school. But what offset that misery for millions of kids was the arrival of the fall TV season.

Fall was when summer reruns ended, and shows — both old favorites and mysterious new ones — arrived. The “Fall Season” TV Guide was much coveted, as lucky owners could pore over all the descriptions and circle the shows of most interest.

Yes, we made calendars. And woe betide us if two good shows aired at the same time, in that barbaric, pre-VCR era!

Nowadays, in the Golden Age of Streaming, the September rush is a thing of quaint nostalgia. Shows appear willy-nilly, sometimes with years between seasons. If you miss an episode, it’s saved for you somewhere. There’s no need to plan whatsoever.

Or is it? Beginning in September and continuing through October, there are enough new and returning genre shows to fill out one of those old-school calendars. We’re already a few weeks behind, but let’s investigate where genre fans will be spending their time this fall:

What We Do in the Shadows Season 3 (FX, Sept. 2): In 2014, Taiki Waititi (Thor: Ragnarok,” Jojo Rabbit) and Jemaine Clement (Flight of the Conchords, Legion) created and starred in a movie about hilariously provincial and incompetent vampires living in Wellington, New Zealand. Two years later the two transferred the concept to Long Island, New York, but even though it stars other people, it’s still hilarious. Lucifer Season 6 (Netflix, Sept. 10): This series took the bare bones of the titlular character from Neil Gaiman’s Sandman and turned him into a police detective. Because that’s what TV does. But it’s been a fun ride anyway, especially thanks to the deliciously smarmy and self-involved performance of Tom Ellis.

Y: The Last Man Season 1 (Hulu, Sept. 13): I had some problems with the original Vertigo comic book series, among them that the lead character seemed more of a writer’s construct than a plausible everyman. That still stands. But my fellow fans loved this series, which should have been subtitled “Women Behaving Just as Badly as Men.” Because they do. But you should watch anyway, if for no other reason than the marvelous performance of Diane Lane.

He-Man and the Masters of the Universe Season 1 (Netflix, Sept. 16): I put this animated show in here just to see if you’re paying attention. (Or if you have kids.) 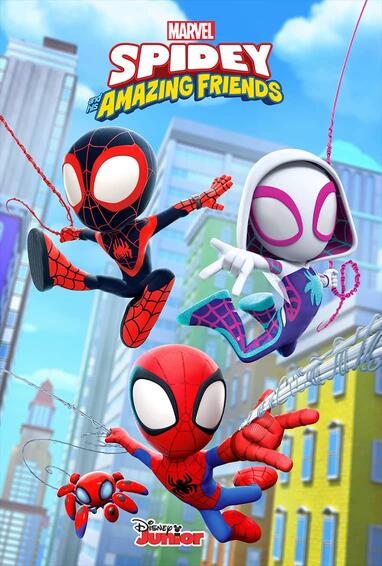 Spidey and his Amazing Friends Season 1 (Disney Junior/Disney+, Sept. 22): You may remember the original Spider-Man and His Amazing Friends from 1981, which co-starred mutants Firestar and Iceman with the Web-Slinger. This new take co-stars spider-people from parallel worlds, Ghost Spider (Gwen Stacy) and, uh, other Spider-Man (Miles Morales). And for some reason, they’re all chibis. Or maybe Funko Pops. Or maybe misshapen children, you decide.

Doom Patrol Season 3 (HBO Max, Sept. 23): If you thought the first two seasons were off the wall, wait’ll you sample season 3. My partner asked, “Are the comics this weird?” Yep. It’s not all capes and cowls, folks. Sometimes it’s sex ghosts and sentient ambulances.

Foundation Season 1 (Apple TV+, Sept. 24): I remember reading Foundation when it was still a trilogy and thinking, “Wow, what big concepts! But no human beings.” There were characters with names and everything, but they all seemed like plot vehicles more than actual people. There was a special dearth of significant female characters, IIRC. For that reason (and sheer scope), Foundation was deemed un-adaptable to the screen for decades. But hey, the first two episodes have recognizable human beings, and most of the major characters are female. Not to mention eye-popping special effects. Good start, Apple.

Midnight Mass Season 1 (Netflix, Sept. 24): I normally don’t have much interest in supernatural suspense/horror shows, but this one has Rahul Kohli, who stole every episode of iZombie he was in. And Hamish Linklater was memorable in Legion.

The Walking Dead: World Beyond Season 2 (AMC+, Sept. 26): I watched the first season, so now I’m too invested to quit, especially since this is the last season. So I might as well see how it ends, no matter how preposterous the premise. (Four teens are walking from Nebraska to New York in the zombie apocalypse.) On the plus side, we’re supposed to learn some more about Rick Grimes’ whereabouts. But is it too much to hope that some of these annoying characters get offed?

La Brea Season 1 (NBC, Sept. 28): A sinkhole opens in Los Angeles and drops a bunch of people — including one half of the lead family — into your basic Pellucidar/Savage Land/Land That Time Forgot. It’s network, not prestige, which means too many episodes, too many B-plots that go nowhere and too much filler. But if there are dinosaurs, I’m in.

Fear the Walking Dead Season 7 (AMC+, Oct. 10): I’m not actually recommending this one. I quit watching last season, worn down by dumb scripts, scenery-chewing performances, ridiculous plots, contrived drama, bad science and inconsistent characterization. And that was before the entire cast survived a nuclear explosion in the middle of Texas. To paraphrase Boris Karloff in The Bride of Frankenstein, They belong dead.

Batwoman Season 3 (The CW, Oct. 13): To be honest, I found the first season so dreary it took me a while to get into the second, especially since the lead actress quit, which is usually the kiss of death. To my relief, Javicia Leslie turned out to be a better Batwoman than Ruby Rose (who was a bit too petite to be convincing). And the upcoming season promises some expansion into the Bat-mythos, including Poison Ivy (Bridget Regan) and Batwing (Camrus Johnson).

All of which is cool and all, but when are we going to get a real, honest-to-Alfred Batman TV show instead of near-misses like Batwoman, Birds of Prey, Gotham and Titans? Seriously, all this dancing around the Big Guy is getting tedious. What’s Ben Affleck doing these days?

DC’s Legends of Tomorrow Season 7 (The CW, Oct. 13): I only watch this show intermittently, because it really is just a comedy where the status quo is always in flux. But it’s a really well-done comedy, and I can roll with whatever team is present when I tune in.

Aquaman: King of Atlantis — The Animated Trilogy (HBO Max, Oct 14): This three-episode series features some wackadoodle animation and a bizarre Aquaman with a blue beard. Could be some serious aqua-fun.

Invasion Season 1 (AppleTV+, Oct. 22): Who doesn’t enjoy a good alien invasion? Plus, the presence of Sam Neill guarantees it will be watchable.

Star Trek: Prodigy (Paramount+, Oct. 28): This animated effort is aimed at kids, and I don’t think even the (voice) presence of Kate Mulgrew will convince me to pipe aboard. I have Lower Decks to scratch my animated itch already, and it’s for adults. But  if you have kids, this might be good for family night.

Locke & Key Season 2 (Netflix, Oct. 22): I enjoyed the comics, but didn’t really see how they could be adapted to the small screen and stay faithful. Well, color me embarrassed, because the nips and tucks Netflix took for the adaptation improved the story, and it’s a must-watch.

But that, as they say, is a column for another day.