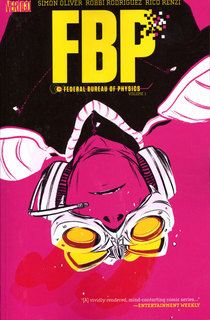 I've been waiting for a library copy of this for ages (in fact Vol. 2 is already out). This is the ongoing series that was originally titled Collider, but was changed after the first issue was already out due to a rights conflict with the name. There are copies of Issue #1 with both titles. It's set in the contemporary U.S. (somewhere in the Southwest, judging by the weather reports), but the world has been fundamentally changed. Disturbances in the laws of physics have become as common as weather disturbances, causing quantum events like localized momentary gravity loss. In response the government created the Federal Bureau of Physics who go out into the field to repair the fabric of the universe.

Special Agent Adam Hardy is the focal character. His father--who disappeared when he was an infant--was a physics professor who first discovered the fundamental changes in the laws of physics. In the title story arc Adam (along with his partner Jay and their supervisor Cicero) first respond to a gravity failure at a high school. But that event is small potatoes compared to the bubble universe that pops up, which requires a rescue mission for the people trapped inside.

Nice visual representation of the BubbleVerse once they're inside it: the art depicts the unreality by becoming more cartoon-like, with a subtle but identifiable change in the coloring. The shady activities we've seen Jay engage in come to a head almost right away. He tries to kill Adam (despite having saved his life during the mission at the school), but fails due to the bizarre physics in this alternate world. Adam returns with his rescue, but Jay is betrayed by whoever hired him to sabotage the mission. It looks like a private corporation is working to undermine the FBP so they can provide commercial physics protection services.

So it's a complex world, with large mysteries set up for exploration. A great start, and the most engaging new Vertigo ongoing series in some time.

The next issue, "Things That Have Been," finds Adam taking a break and visiting his uncle. This is also where his father's RV is parked, and Adam finally gets a look at his father's files and hears the story about his "death." That's in quotes, because he was swept up in a quantum tornado, and we've already seen how unpredictable quantum events can be.

The final two-part arc, "There's Something About Rosa," introduces Adam's new partner at the FBP: Agent Rosa Reyes. Enigmatic at first, we soon learn her own strange history with a quantum event. She becomes involved with criminals who are using unauthorized physics equipment for crimes, another possibility in this changed world. Her new team has her back in a big way. And Adam's investigation into one of his father's associates starts to bear fruit. Lance Blackwood was the man who videotaped the professor's last mission, probably stole his final notes, and is involved with the company that is capitalizing on the privatization of physics protection.

A short section in the back covers character design, coloring (which plays an especially large role), and  the design of the first cover.

I've  been curious about this series. I think my friend has volume one. He said it was alright but I may have to check it out.

I thought it was a good series myself (I haven't read an issue in quite some time.) I really liked the introduction of Rosa since the series was quite the, um, sausage fest. Although I did like Hardy's original partner.

Off to a good start, I thought (as I said above). I'm looking forward to reading the second collection soon--it's on order at my library.

I should mention that I know the colorist (Rico Renzi) casually. He works at the Heroes Aren't Hard to Find comic shop in Charlotte.