No less than five of the Captain’s favorite genre TV shows have reached a season finale. Maybe it’s only noticeable because the pandemic has delayed the beginning of so many other shows. Maybe it’s just a coincidence.

But it’s worth a look at how those seasons ended and how they set us up for the future. (Needless to say, huge Spoiler Alerts ahead!) At the end of its seventh and last season of ABC’s Agents of S.H.I.E.L.D., Deke Shaw (Jeff Ward, left) remained in 1983 in an alternate timeline, Jenna Simmons (Elizabeth Henstridge, middle) retired with Leo Fitz (Iain De Caestecker , not pictured) to raise their daughter and Daisy Johnson (Chloe Bennet) went on a mysterious space mission. (ABC/Mitch Haaseth)

Most of the much-anticipated new shows in production — WandaVision, Loki, etc. — are being created by Marvel Films and are miniseries connected to the Marvel Cinematic Universe. They’ll all appear on Disney+, with a few exceptions:  One live-action show and four animated series are planned for Disney Channel (“Moon Girl and Devil Dinosaur”), Disney Junior (Spidey and His Amazing Friends) or Disney-owned Hulu (Helstrom, Hit-Monkey, M.O.D.O.K.).

Famously, S.H.I.E.L.D. got off to a rocky start, running in place until revelations about the espionage organization were revealed in Captain America and the Winter Soldier. But after that the show grew increasingly independent of the movies, which allowed it to grow in exciting, satisfying ways. In later seasons S.H.I.E.L.D. explored elements of Marvel Comics the movies hadn’t yet mentioned — LMDs, Ghost Rider, Inhumans — and took place where repercussions from the movies couldn’t follow, like the artificial universe of the Mainframe computer, the far future and, in the last season, an alternate timeline.

Speaking of satisfying, the finale left most fans smiling. As a virtual antidote to Avengers: Endgame, nobody sacrificed themselves and everybody got a happy ending.

Most importantly, almost all of the characters are still available should some future screenwriter decide to include them in the movies. The LMD version of Agent Coulson is exploring the world in Lola, his flying car. Mack and Yo-Yo are still a couple, with the former still the director, and sending the latter on missions. Agent May is teaching S.H.I.E.L.D. recruits at the Phil Coulson Academy. Deke is a rock god and S.H.I.E.L.D. director in an alternate timeline. FitzSimmons are retired, and raising baby Alya, Deke’s future mother. Agent Piper is now paired with an LMD of her best frenemy, Davis. Daisy, Sousa and Kora are on a mysterious mission in space, which seems likely to tie in with what Nick Fury was building in Spider-Man: Far From Home, which is likely the defense-from-alien-attack agency named S.W.O.R.D. (Sentient World Observation and Response Department).

I would love to see these characters pop up in future Marvel Films efforts. (Well, maybe not Deke.)

The second season of Doom Patrol ended Aug. 6 when the ninth episode aired on DC Universe and HBO Max. If it didn’t seem much like a finale, that’s because it wasn’t supposed to be — a tenth episode was planned, but was scotched by coronavirus.

"We knew we were facing a potential shutdown, so we were able to do a bit of a pivot and make sure that Episode 9 would be just as satisfying of a conclusion to the season as if we had moved on to Episode 10," showrunner Jeremy Carver told TV Line. "We were very happy with how we were able to structure it to give us a satisfying end to the season."

I think we have to agree to disagree on that one. The season “finale” ended with The Candlemaker snatching Dorothy into a bonfire and disappearing, Jane trapped at the bottom of a well by Miranda’s corpse and all the other characters frozen in wax. Cliff is just a disembodied head!

I don’t really call that satisfying. But it certainly leaves me eager for a season 3 … if there is one.

The season finale of NOS4A2 doesn’t air on AMC until Aug. 23, so I can’t really give a rundown on how it left the main characters. And a season 3 renewal has yet to be announced, so this could be it. 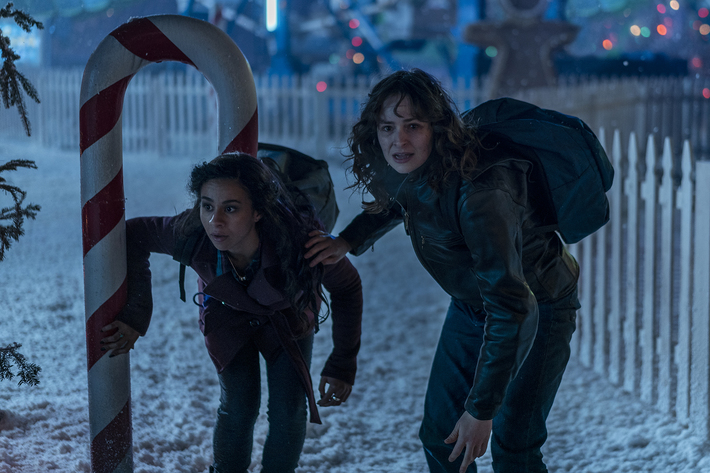 As the second season of AMC’s NOS4A2 drew to a close, Maggie (Jahkara J. Smith, left) and Vic (Ashleigh Cummings) sneaked into Christmasland to blow stuff up.  (Zach Dilgard/AMC)

I don’t think so, though. While “NOS4A2” ratings are down by 50% or so from the first season, it’s still doing well for an AMC show. Plus, it airs on BBC America as well, so that’s gravy on the ratings.

Still, whether Bats and the other kids are rescued in the season finale (as I think they will), what more story could be told? Chris McQueen is dead, Bing is in jail, Vic has stopped drinking and mostly repaired her marriage, and if the kids are rescued, the jig is up for Charlie Manx. I suppose he could come up with a new way to bedevil the cast, if need be.

Regardless, there’d better be a third season or I will be much put out!

Some wouldn’t classify this as a genre show, but I am mesmerized by Perry Mason in much the same way I am by any good sci-fi series.

The reason is how the series completely immerses the viewer in 1932 Los Angeles. The between-world-wars era isn’t one that is examined much in popular fiction, and when it is, the location is usually New York or Berlin. L.A. in the early ‘30s feels like a whole ‘nother world, which makes it “genre” in my book. 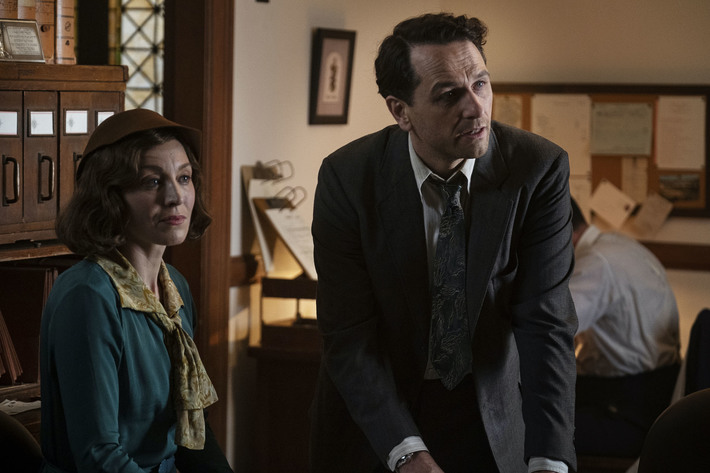 At the end of season 1 of HBO’s Perry Mason, Della Street (Juliet Rylance, left) was on the path to becoming a lawyer, while Mason (Matthew Rhys) had already tried his first case. (Merrick Morton/HBO)

And what a depressing world it is. The lingering effects of the Depression give us a grimy, poverty-stricken milieu. Racism and sexism are as bad, or worse, than they’ve ever been. Pop fiction reflects the worldwide disillusionment with the Enlightenment caused by the Great War, and everybody seems to feel hopeless and helpless. Even our protagonist is a disgraced ex-soldier when the show begins, suffering from PTSD that manifests in rage issues and alcoholism.

Sadly, this worldwide sad is not an exaggeration. Read the books, look at the art, watch the movies of the early 1930s. The “good ol’ days” weren’t quite as rosy as some would have you believe.

This is accentuated by all the lead characters being outsiders of some kind. Mason is a gin-soaked failure, his wardrobe consisting of odds and ends taken from morgues. Della Street is a closeted lesbian. Paul Drake is a black cop, abused by his colleagues and superiors. Even Perry’s part-time girlfriend, a Mexican aviatrix, is suffocating in this claustrophobic world: "I'm a wetback and a woman," she says. "I need to stay ahead of the rest of them."

The season 1 finale Aug. 9 on HBO leaves us where those familiar with the 1957-66 TV series or the Erle Stanley Gardner novels would expect: Perry is now a lawyer, Della is becoming one while running the office and Paul is a private detective. Other than that, though, this is a completely unexpected and thoroughly mesmerizing “Perry Mason” whose devotion to protecting the little guy is organic and thrilling.

I was impressed with how thoroughly Stargirl dealt with its Big Bads, the Injustice Society, in the Aug. 10 season finale.

Henry “Brainwave” King is dead. (Permanently dead, according to showrunner Geoff Johns.) Jordan “Icicle” Mahkent was shattered into a jillion pieces. Steven “The Gambler” Sharpe is broke. Dr. Ito, The Dragon King, was murdered by his own daughter. Solomon Grundy is acting like a whipped puppy. Crusher “Sportsmaster” Crock and Paula “Tigress” Brooks are (presumably) in jail. William “The Wizard” Zarick and Anaya “The Fiddler” Bowin were already dead.

Pretty thorough housecleaning by the “new” Justice Society, who also achieved a number of personal goals. Courtney is over not being Starman’s daughter. Rick has overcome his rage issues. Beth has come out of her shell, thanks to the artificial intelligence “Chuck.” And the whole Whitmore-Dugan clan is finally aware of, and supportive of, Pat and Courtney’s superhero hobby.

And Sir Justin, the Shining Knight, has recovered his memory and has gone in search of the other members of the Seven Soldiers of Victory. I hope he finds them, because two of them are Green Arrow and Speedy, and I want to see how Stargirl handles that!

But all is not well. The very religious Yolanda seems to be falling into depression, having committed murder (albeit in self-defense). Solomon Grundy, The Gambler and Shiv are all still on the loose, and know our heroes’ secret IDs. One can well imagine Icecicle’s shards moving together to reform the whole, like The Iron Giant.

Plus, The Shade has returned! (You saw a giant, shadowy hand created by The Shade in the series premiere, dragging the original Dr. Mid-Nite to his death.) Shade is one of the most powerful and multi-faceted villains in the DC Universe, and Johns can be expected to make the most of him.

Further, Shiv found the black diamond that houses Eclipso! A former Angel of Wrath, Eclipso is utterly evil, and has the power to “eclipse” others into doing evil. Not good. Especially since, in the comics, Eclipso murdered Beth Chapel, Yolanda Montez and Rick Tyler in 1993! Those events were later erased, but still, it doesn’t bode well for the current Dr. Mid-Nite, Wildcat and Hourman.

And what’s with the guy calling himself Sylvester Pemberton at the end? We saw Starman die in the series premiere, didn’t we? Hmmm.

This is all fun stuff, which makes the already-announced season 2 something to anticipate.

Heck, all of this fun stuff. Let’s hope most of these endings are temporary!

It's not ending, but Netflix's Lucifer season 5 was affected by COVID. The season is sixteen episodes but they only dropped the first eight. Somewhere after that they had to suspend filming. Episode eight does have a cool cliffhanger.

Good to know, Richard! We're watching Lucifer right now, and I would have wondered what was up when we hit #8 and there were no more.

We watched the one set in 1946 last night, and it honestly wasn't very good. The idea was great, and there were some great lines. But the actors who play the detective and the forensics person seemed to be phoning it in. And the actress who plays Mazikeen was cast as a chanteuse, with two musical numbers, but she's really not a very good singer. The guy who plays Det. Douche played an effeminate character, and while I won't say he was good, at least it was different. The guy who plays Amenadiel played a comedic character, but it was so over the top his scenes seemed to belong in a different show. The psychiatrist played a bartender and was her usual bland self. Only Tricia Helfer and Tom Ellis showed any spark; she played her part with pathos and he was his usual ingratiating self.

I say all this only because we generally love Lucifer, and this one episode was so far below their usual standards it was remarkable. So I remarked on it.