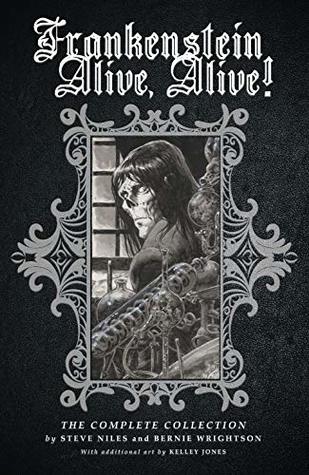 The final horror collaboration between writer Steve Niles and artist Bernie Wrightson began in 2012, with the third issue taking until 2015. Wrightson passed away in 2017, so it looked like an aborted project, as I noted in my earlier review. But it turned out that Wrightson had worked on another issue, and selected veteran horror artist Kelley Jones to complete it. I remember the series being announced as an ongoing title, and the third issue concluded with "to be continued"--so I don't think it was intended to be a four-issue miniseries at the outset. But Niles clearly figured out a way to get to a satisfying conclusion in four issues. The third issue left the monster in the home of the sympathetic Dr. Ingles, who had protected him and given him access to his large library. Ingles appears increasingly unhinged, determined to use a woman's newborn child to revive his dead wife. Frankenstein rescues her from the burning house, and assists with the birth of her child. After finding a safe place for them, he continues alone, secure in the knowledge that "any creature of this world, whether born by science or sorcery, deserves to live." So the monster finds empathy, and forgives himself for his past: not really "The End," but satisfying nonetheless.  Kelley Jones did a wonderful job completing Wrightson's work. You can tell them apart if you're looking for differences, but the story flows smoothly.

This is a wonderful series, some of the best work of Wrightson's career (and that's saying something). Bittersweet that it ended the way it did, but at least it was completed by Wrightson's hand-picked successor. Recommended.