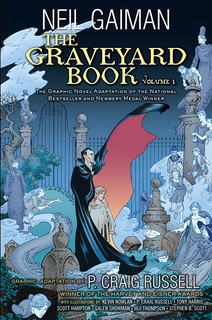 That successful collaboration continues with The Graveyard Book, Gaiman’s New York Times bestselling and Newberry Medal-winning novel, which Russell is adapting to comics. The Graveyard Book Volume 1 (of 2) arrived this month from HarperCollins ($19.99) and it’s just as good as its pedigree would suggest.

Graveyard Book is the story of Nobody Owens, a child adopted by the inhabitants of a graveyard – and perhaps by the graveyard itself – after the brutal slaughter of his family by the lethal “Man Jack.” Those inhabitants are mostly the spirits of the dead, but they also include Bod’s mentor Silas (a vampire, although the text is somewhat coy on that), the mysterious Indigo Man and the dangerous Sleer. Silas and the spirits raise and educate Bod, as he’s called, and as long as he remains in the graveyard he is largely protected, and able to go unseen.

That’s important, because the Man Jack – who is working for evil parties unknown, with an agenda that requires Bod’s death – hasn’t given up his search. And even in the graveyard Bod isn’t completely safe, as he finds when he is snatched through the gateway to the City of Ghouls.

Creepy enough for you? And yet, a story that begins with multiple murders and takes place almost entirely in a haunted graveyard is also a charming coming-of-age tale. It is one of Gaiman’s gifts that he can pull off this seamless blend of whimsy and the macabre.

But a graphic novel depends greatly on art, so it’s fortunate Graveyard Book is graced by the presence of Russell. His lyrical, sensuous work is also a seamless mix of styles, showing influences ranging from Renaissance painting to Burne Hogarth’s “Tarzan” comic strip.

Russell doesn’t do all the art – it would have taken him “four or five years,” he told Publishers Weekly – but he did do the layouts throughout. Then he selected artists that meshed with his own style to do a chapter each, which for the first book includes Stephen B. Scott, Scott Hampton, Tony Harris, Kevin Nowlan, Galen Showman and Jill Thompson. The result is surprisingly smooth, given the diverse hands, with Russell’s sure storytelling ability making each panel on each page feel as comforting and inevitable as sunrise.

The only complaint one can imagine with The Graveyard Book Volume 1 is that it contains only the first five chapters and an interlude. That leaves the reader hanging breathlessly until Volume 2 arrives in late November. Which wouldn’t matter all that much, if it wasn’t so darn good. 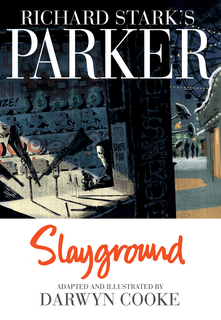 Stark – actually an open pseudonym for writer Donald Westlake – is exceptional at characterization (especially of his hard-bitten protagonist, the professional criminal Parker), creating an environment (the aforementioned “Mad Men” era) and laying out a complicated scenario in which the reader must be invested to enjoy the story. That latter part, according to “Parker” aficionados, is the real joy of the books.

In Slayground, the premise is simple in form, but complex in detail. As a result of a robbery gone awry, Parker finds himself trapped in a Buffalo, New York, amusement park that is shut down for the winter. Fortunately, he has with him the fruits of the robbery. Unfortunately, a bunch of local gangsters know this, and are guarding the only exit – while sweeping the park to find him, kill him and take the money.

Where this gets complex is that Stark and Cooke lay out a map of the amusement park, then show Parker making various preparations that are obviously traps – but it’s not so obvious how they’re going to work. The reader (and the gangsters) spend the rest of the book finding out just how clever Parker is.

What makes this work in a graphic novel, of course, is Cooke’s artwork. His clean, borderline-cartoon style is pleasant enough, but it’s Cooke’s attention to storytelling that really makes it sing. Yes, it’s nice to look at, but more importantly, every panel, every shadow, every line also informs the story. 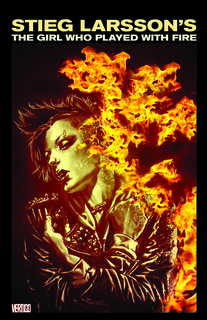 I’m afraid I can’t say the same for “The Girl Who Played with Fire” (DC Comics, $29.99), an adaptation of the second book in Stieg Larsson’s “Millennium Trilogy.”

I rather enjoyed the first book by the same creative team, The Girl with the Dragon Tattoo, but not necessarily because of the quality of the adaptation. Honestly, it was simply because the graphic novel was far more faithful to the book than the popular movie – and as such, eye-opening on a number of levels, from the the mechanics of Larsson’s story to the sexual mores of modern Sweden.

But the second book doesn’t have a movie for comparison’s sake, and standing on its own is fairly weak. While no doubt writer Denise Mina’s story is faithful to the original – as was the first book – the artwork by Andrea Mutti, Antonio Fuso and Leonardo Manco fails to bring it home.

For one thing, the work is bland, which in itself is a serious artistic crime. But it also fails on a storytelling level, which is worse. There are several silent sequences, for example, where something important is obviously happening, but there are no indications in the artists’ arrangement of medium-range shots what that important thing is, or what person or objects should be the reader’s object of attention.

As a result, The Girl Who Played with Fire graphic novel is hard to follow, and fails to engage.

re: The Girl Who Played with Fire

Actually it does. I haven't read the graphic adaptations (or the original books) but I have seen all three Swedish movies, which are available for rental on DVD with excellent dubbing into English. I also haven't seen the Daniel Craig remake of the first movie but I understand it is not up to the Swedish version.

I'm glad to see Slayground get some love.  You are right the basic story is such a simple concept, but the execution of it is just so brilliantly done. I've enjoyed all of Cooke's adaptation of the Parker novels so far.