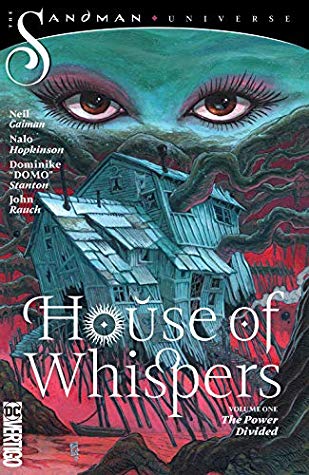 Unlike the other series, this one is something new: it does not relate to either earlier Sandman or DC horror comics. It has a vodou setting, which I do not recall from The Sandman, although it does sometimes factor into Hellblazer stories (the ones featuring Papa Midnite). Perhaps Neil Gaiman always wanted to do something with it, as he did when utilizing Japanese mythology in The Dream Hunters. The House of Whispers is the House of Dahomey, the houseboat of Erzulie Fréda (goddess of love and beauty), where the souls of Voodoo followers go when they sleep to petition her for love and good fortune.

Erzulie became entangled with four human girls in the introductory Sandman Universe story. They open a mysterious journal full of rumors and whispers, which attracts the attention of Shakpana, the god of plagues. Turns out the journal is from the library in The Dreaming, and should not be in the mortal world at all. The girls begin to spread a plague which separates human souls from their bodies.  This cuts off the connection between Erzulie and her followers, and sends her houseboat careening into The Dreaming, where it settles near The House of Secrets and The House of Mystery.

So despite being a new construct, this arc takes it directly into contact with The Dreaming. The crossover reflects the current state of the place--Daniel has abdicated, and Judge Gallows is in charge--and many of the main characters appear as well, notably Cain and Abel. I've never been a fan of vodou-based stories, and this one doesn't change my mind, although the connection to The Dreaming is intriguing. The story feels convoluted. Dominike "Domo" Stanton's art is more cartoony than the other series, but not so far afield to be distracting. Probably interesting enough to try the next collection.