It came from the back issue bin- X-men edition

Over the past few years I've bought more than a few back issues. Actually I see nearly complete sets of issues and decide to buy them for a really good price. Then I spend years trying to fill in the gaps. I've decided to start these threads to help me actually read what I've bought. They tend to just fill up space in my long boxes.

I realize i've got an outstanding reading project. This will just be something that gets occaisionally updated. As you can tell this thread is dedicated to X-men back issues. 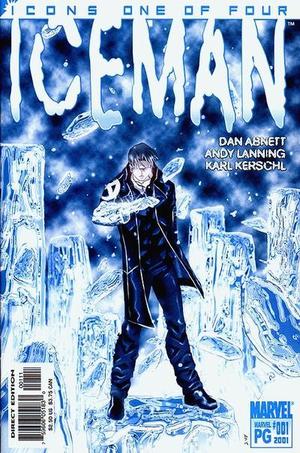 First up is Icons: Iceman. It's a mini from 2001. Starring none other than Bobby Drake. The series starts with Bobby heading to Japan after getting word from ex-girlfriend, Opal that 1) he has a son and 2) the son needs Bobby's help. So Bobby meets up with Opal who is working for the Winterbrand corporation. The head scientist is trying to find a cure for their son.  Iceman does have a few problems with some weird creatures called Augmen. As the story continues we learn that the head scientist actually controls the Augmen and Bobby was needed to make the augmen process safe for adults since the current augmen are children. The sick child was just a way to get Bobby out of the country and away from the X-men.  Along the way be meets an old man who can turn into legendary warrior Fo-Dog. They defeat the augmen. Bobby heads back home knowing that the kid was never his. He invites Opal and the child back but they've already left for elsewhere.

This was an ok story. The art was decent and fit the tone. When I saw it was written by Andy Lanning and Dan Abett I was excited. Their work on Annhilation is fantastic. Here the story is typical superhero fare.

Bobby is not a super interesting dude. He's really powerful though. He rarely gets tripped up and it's mostly due to him realying on his power than his smarts. Which he doesn't have much of. He's not dumb mind you but he's no Cyclops. The addition of Fo-dog as an ally is interesting. I'm  not sure if he's ever appeared before. Having a mystical hero instead of a mutant helping out makes things interesting.

Finally the interesting thing is this takes place during the time when the X-men where wearing the black uniforms similiar to the ones in the films. Also this sort of ties-in to the story line that was going on in Grant Morrison's New X-men. The Augmen were similiar to characters in New X-men in that they were humans that had mutant powers grafted on them to give them powers. The villain in this story is working for someone else and that someone is only revealed in a throw away line in a phone conversation, Mr. Sublime. John Sublime was the villain in the storyline in New X-men.

That's all I got for this. I'm open to discussion but that's fine if there is none. I'm not sure how popular these Icon series were. I remember when they were out at the time.  I've got a few more to read.  I'll be posting here when I do.

Permalink Reply by Jason Marconnet (Pint sized mod) on May 24, 2011 at 9:35am
I started reading the next mini from my back issue stash which was another Icon series, Rogue. This one seems to be more of a Roge: Year One type story as opposed to the Iceman series which took place during the current X-men Continuity at the time.

I did read the first issue of the Iceman mini. Maybe the second issue, but I never did finish it. I think my LCS forgot to pull it for me, and I forgot it existed. I do recall enjoying the art quite a bit. I'm an Iceman fan, but besides him I wasn't familiar with Opal and some of the others. I hadn't read an X-men comic in quite a while.

I'll say something here if I have anything to say, but my X-men reading over the past 20 years has been scarce at best.

I think I have in my collection some issues of a Rogue series that ran 12 issues.  Is this a different series?

Also, like you, I was a fan of Abnett and Lanning's Annihilation work, so I'm going to keep an eye out for that Iceman mini.

Travis, I think I remember hearing about Opal years and years ago in older X-men issues. But it was just in a passing comment from Iceman saying how he had been in a fight with her or forgot to call her. I think it was in the X-cutioner's Song cross over from '92. So it was a while ago. I wasn't familiar with her but I knew she was his long-time girlfriend.

Also Skottie Young did the art for one issue of the mini, either #3 or 4.

John, the Rogue series I'm reading was a four issue mini. It was under the banner Icons. They were around 2001 or 2002. I know they had ones with Iceman, Cyclops, Rogue and Nightcrawler. Not sure if there were any others. I think they were all 4 issue mini series.

John, be aware that the Iceman series while readable is not anywhere near the level of Annihilation.

Also Skottie Young did the art for one issue of the mini, either #3 or 4.

I definitely don't have that comic. I love Skottie Young's work. I've met him at a couple of conventions too, and he's really nice.

I think it was in the X-cutioner's Song cross over from '92. So it was a while ago. I wasn't familiar with her but I knew she was his long-time girlfriend.

Yeah I was already out of the X-men universe for the most part by '92. By that time I was just reading X-Factor

Jason, there was a Chamber mini-series in 2002 under the Icons banner.  He was one of the newer members of the team at that point.  There were also some Avengers Icons minis, such as Tigra and Vision.

Jason, there was a Chamber mini-series in 2002 under the Icons banner.  He was one of the newer members of the team at that point.  There were also some Avengers Icons minis, such as Tigra and Vision.


John, be aware that the Iceman series while readable is not anywhere near the level of Annihilation. I finished the next miniseries from my recent purchase of X-men back issues. This is Icons: Rogue.

I actually enjoyed this more than the Iceman mini. While Iceman took place during the current X continuity at the time, Rogue is set a few years back from what I can tell. For instance Colossus makes an appearance and when this issue was released, I believe he was still dead. So I consider this a Rogue:Year One story.

In the story is appears Rogue has not been on the team long and the other members are afraid of her. Professor X does his best to help her but something goes wrong and Rogue leaves. The next two issues involve Rogue on the run and finally coming to grips with her power. The last issue has her returning to the mansion and saving the day from a child with a power he too can't cantrol.

It's a pretty simple story but it explores the character in a different light. Also they gave more insight to what she goes through when she touches someone.

I'm not familiar with the creative team but they did a great job on this mini. 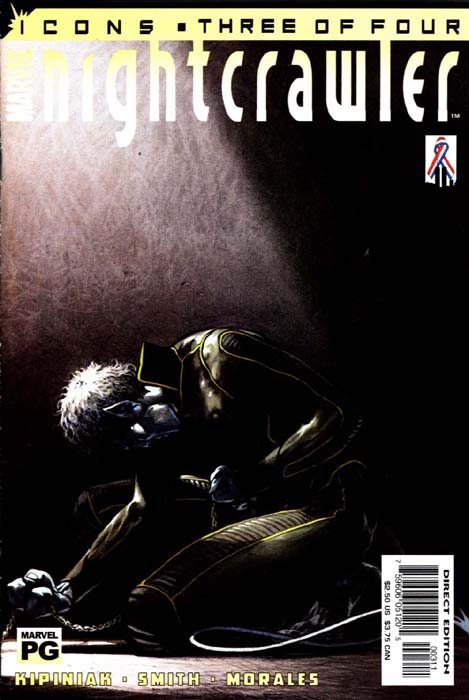 I liked this one. It wasn't the most outstanding story every but a good solo feature for Nightcrawler. I may be a bit partial since he is one of my favorite characters.

The story involved Nightcrawler coming across a human trafficing ring and doing his best to shut it down. He questions his faith and his role as a superhero. Nightcrawler is in the process of becoming a priest. He has a mentor, Father Whitney, who questions Kurt's motives through the course of the story.

So far of the Icons minis I've read, they have done a good job of finding the right artist for the story. This is the case here. While it's a standard tale it really gets a good look at Nightcrawler. We see him trying to balance his role as a soon-to-be priest with his duties as a hero.

I know a few years later he had his own series that lasted 12 issues. I guess he didn't go through with the whole priest thing, or did he? Maybe someone can fill me in on that. Anyways I think this could have been a good set up for an ongoing. Kurt as a superheroing priest. I liked his supporting cast of Father Whitney. He's an interesting character. He can assist Kurt with his faith but doesn't fully understand Kurt's duties as an X-man.

So far these Icon series have been good finds in the back issue bin. Unfortunately the next one up, Cyclops, I could only find 3 issues not the 4th. So I may or may not read that one. If not the next X-men back issue read will be Secret Invasion: X-men. I do have some x-men issues I bought 4 or 5 years ago sitting in my long boxes aching to be read. It's not only the x-men wanting to be read. I've got quite a few back issue finds that need the pages turned. Stay tuned.

I think I liked this take on Kurt.  It was a far remove from wining and dining the Laydeez with his X-Men buddies.

A priest as a superhero is a great idea.  Apart from the pesky Christian turning the other cheek thing.  Of course the movies took up and ran with the religious idea but made him a bit OTT in his fervour.

Didn't they find out this Nightcrawler was some kind of imposter?

I loved the X-Men Secret Invasion book.  Looking forward to hearing what you think of it.