Kitty Genovese: Should Real-Life Tragedies Be Kept Out of Comics? 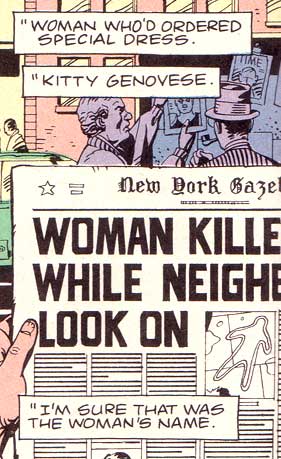 The first time I encountered the name of Kitty Genovese was reading Alan Moore and Dave Gibbons' origin of Rorschach in Watchmen. At the time, I did not know that she was a real person who was really murdered. But I soon discovered the true story. In the Sunday Daily News, they wrote a compelling article on the upcoming 50th anniversary of the crime. The short version of it was hat a young woman was murdered late at night on March 13, 1964 in Kew Gardens, Queens, New York with over thirty people witnessing it and not one helped or called the police. They all gave varying reasons as to why not, some reflecting the "morals" of the times. It gave New York City the reputation of unfeeling apathy that it has yet to fully shed.

But should she be used as part of an origin for a super-hero, even  a vigilante like Rorschach or by an author of Moore's magnitude? What should be kept off limits? Granted personal tragedies are part and parcel to many super hero origins, most notably Superman and Batman. But those involved the destruction of a fictional planet and the murders of fictional parents. There were no actual people connected to those pretend hardships. Over time, the Kitty Genovese reference grew to bother me, much like Disney's Pocohontas who was also a real person, not a fairy tale who did not have a happy ending.

Both Marvel and DC have used real events and people to make their stories more authentic, usually it's the President or it takes place during Word War II. It could be in bad taste like having the Hate-Monger turn out to be Adolf Hitler. (Actually Der Fuehrer was used so often that I'm surprised that neither company has tried to revive him in the present time! Yikes!)

History, no matter if it was a century ago or yesterday, is filled of tragic events and terrible atrocities. Should there be a hero whose origin is linked to 9/11? Or the Ukraine? Or Iraq? If a specific incident is a major part of a story, does it diminish the incident?

Immortus rescued his wife from the Titanic. Lost In Space's Don West was inspired by the Challenger. Comic book Nazis are intertwined with Real Nazis. The lines between reality and fiction are increasingly blurred. But what is too much? Does anyone have any other examples that may have bothered them?

Do Comics have the right to use real life tragedies to enhance their stories?

Too true, Captain.  Certainly if in 1910 someone had written a story in which after a massive war that brought down four empires, a bad artist who had been living in a flophouse would emerge to take over one of Europe's largest countries and launch an even more massive war, it would have been regarded as absurd beyond belief.

Well, if you made up someone like Hitler, who would believe it? Right now there's a series at IDW titled Three that is set in ancient Sparta, with the underlying premise based on Sparta's actual set-up -- and it's so awful you'd never believe it in fiction. History is replete with events and systems that nobody would believe in fiction!

The freedom to discuss events is important -- not just for forums and television pundits -- but for other writers as well.

That, I think, is the essence of not only art, but a free society. We MUST be able to speak freely, to create art freely, to say and do things freely, even if -- ESPECIALLY if -- those in power don't like it.

But that's an easy one. I think we all agree that we ought to be able to piss off those in power. That's the essence of being an American. But you should also be free to piss off your neighbor. The church. The popular kids at school. Exxon and BP. EVERYONE.

At bottom, what we're talking about is the First Amendment. If you haven't read it, go do so. It encompasses five rights, all of which, together, are what we all think being an American is all about. (Some would add the Second Amendment. Ignore them.)

Clowny is right: This is what we do, who we are, how we create art -- and commerce, and politics and everything else.

Dealing with stuff like 9/11 is a matter of politeness, but not a requirement for art, politics or commerce. And we all should grow up and face that.

And thank you, Alex, for reminding me of that.