On Jan. 22, Marvel Comics shipped Miracleman #1 to comics shops across America. Miracleman isn’t a very well-known character, but he is one with a rich history, one whose book has boasted some of the finest talent in the biz and one who has attracted a bajillion lawyers. 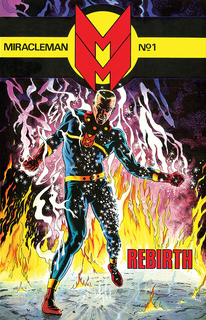 “A bajillion is a great many lawyers,” you may say. “I doubt very much that statement is accurate in an objectively determined manner.” I understand your skepticism, so let me relate The True Story of Miracleman (And Why You Should Care).

The tale of Miracleman begins, as do most comic-book histories in one way or another, with the debut of Superman in 1938. That premiere, in Action Comics #1, sold so many comic books and made so much money that it single-handedly transformed comic books from a fad into an industry. Every nickel-and-dime publisher in New York City decided to publish their own “mystery man” – they weren’t called “superheroes” yet – using Superman as a template.

Naturally, National Publications – the publisher of Action Comics, now known as DC Comics – took exception to action heroes that were too similar to the Man of Steel. For example, they quickly sued out of existence a red-suited hero named Wonder Man in 1939.

And when Fawcett Publications fielded their own red-suited superhero in 1940, National’s lawyers swung into action again. They charged that Fawcett’s Captain Marvel, a boy who changed into an adult superhero by saying the magic word “Shazam,” was a copyright infringement of Superman, an alien from another planet who had super-powers due to pseudo-scientific reasons.

Unlike the owners of the unfortunate Wonder Man, though, Fawcett fought back. And that lawsuit dragged on in court until 1953, by which time Captain Marvel wasn’t making very much money any more, so Fawcett threw in the towel. As part of a settlement, Fawcett agreed to get out of the funnybook business.

That left a UK publisher named L. Miller & Son in a bind. They had been reprinting Captain Marvel material in the UK, and those books were big sellers. So they turned to the preposterously named Mick Anglo to write and draw new Captain Marvel stories, but with a variety of changes to avoid National’s lawyers. Captain Marvel, for example, became Marvelman, Captain Marvel Jr. became Young Marvelman, Mary Marvel became Kid Marvelman, and so forth. 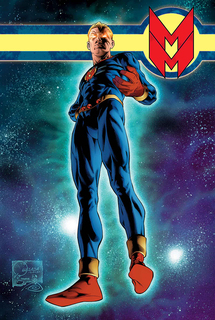 Miller & Son continued publishing Marvelman adventures until 1966 – but Anglo left in 1960, claiming he owned the character. Anglo even published a couple issues of Marvelman with the name changed to “Captain Miracle” – foreshadowing trouble to come.

In 1982, editor Dez Skinn of UK publisher Quality Communications decided to update the Marvelman concept for an adult audience in Warrior magazine. He brought in a kid named Alan Moore – now one of the most celebrated writers in all comic-dom – and superstar artist Gary Leach to do the job, splitting the rights four ways (including Quality). Later those rights were further split with Leach’s replacement, another superstar artist named Alan Davis.

But evidently Skinn had never gotten the rights in the first place, at least not the ones disputed by Anglo. Further, the lawyers for Marvel Comics, who objected to the word “Marvel” in any title, started making snarly noises. The five putative owners of Marvelman couldn’t come to an agreement on how to proceed, and Marvelman ended with Warrior #21.

Meanwhile, U.S. publisher Eclipse Comics bought some kind of rights from Skinn, and began publishing the Marvelman stories in America, with the word “Miracle” substituting for “Marvel” everywhere, to avoid those snarly Marvel lawyers. When the UK material ran out (with Miracleman #6), Eclipse hired Moore to continue the story. When Moore finished his story (with issue #16), he passed the baton – and whatever rights he possessed – to a kid named Neil Gaiman, another guy who went on to amazing success and acclaim.

Gaiman planned three six-issue “books,” to be titled Golden Age, Silver Age and Dark Age, whereupon the Miracleman story would be finished. But with issue #24, only two issues into the Silver Age “book,” Eclipse went bankrupt. The rights to all its properties, including Miracleman, were bought at auction by Todd “Spawn” McFarlane, another pretty famous guy.

That’s right, another lawsuit! McFarlane and Gaiman went to court in 2001, and that’s where Miracleman has been ever since. 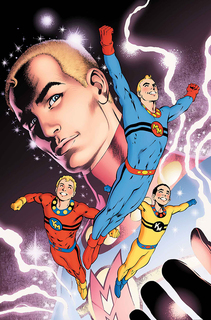 Well, until 2009, when Marvel Comics (them again!) announced they had bought the rights to Marvelman/Miracleman from Mick Anglo (him again!). And in 2013, Marvel announced that it had further buttressed their claim (they didn’t say how), and would begin reprinting Miracleman until the original material ran out, whereupon Gaiman (him again!) would finish the story. Moore (him again!) says he no longer owns any rights, and has insisted his name be left out of the credits (which now refer to him, weirdly, as “The Original Writer”).

Now you may be saying “Is any comic book worth this kind of agita?” And the short answer is “Yes.” I first read Eclipse Miracleman comics in the 1980s, and have never forgotten them. In fact, a number of industry talking heads maintain that no creator ever forgot them, because the amazing creativity, sophisticated suspense, astounding plot twists and stark brutality of the series changed how comics were written. I won’t go that far – I consider the bulk of 1990s comics to be unreadable – but Miracleman was pretty spectacular.

In this story, instead of child radio reporter Billy Batson saying “Shazam” and becoming Captain Marvel, adult newspaper reporter Micky Moran shouts “Kimota” (“atomic” backwards, sorta) to become a superhero on par with Superman. The first issue begins with Moran, who has amnesia about being a superhero that nobody else remembers, suffering from recurring dreams about flying, and an elusive word he can’t remember. When he does re-discover “Kimota,” it sends him on a journey to find out the hows and whys of his transformation, and why nobody remembers Miracleman, which results in one heckuva exciting story, far more than you’d expect from the silly froth Mick Anglo wrote for children.

Moreover, Moran discovers Kid Miracleman had never forgotten his transformational word – and had retained super-powers in secret as he grew up, becoming a murderous sociopath in the process. Only one person has a ghost of a chance of stopping him: Captain Marvel. I mean, Marvelman. I mean, Miracleman!

Or maybe some lawyers. Because, as we’ve seen, the only thing that can reliably stop a superhero is a bajillion lawyers. OK, maybe not a bajillion. But a lot!

The character that I have never heard of before has an interesting history.

This is where your troubles began, as a fan, Mark...

I am going to wait until the first trade comes out on this one. Even if it's a ridiculously priced hardcover. I'll just get it from InStock Trades for half off. But there seems to be a lot of filler in those individual issues.

I have the Eclipse issues, and, like the Captain says, I have never forgotten them. There's been a lot of death, gore and destruction in the decades since those books, but it was truly shocking to see it in those stories. But it isn't just about death, gore and destruction; it very much is about the sense of wonder that comes with strange men with miraculous abilities walking the Earth -- but seen through a different lens.

I plan to read the collection, also. The story is so legendary that I have to experience it, even though it would have had to have been reprinted at least ten years ago for me to be really excited.

Those are pretty preposterous names, too, I agree. But they weren't in my story. And the guy whose name kinda-sorta means "Irish Englishman" is.

Then we get Dez Skinn and Gary Leach! I thought about making a joke about the law firm of Anglo, Skinn & Leach, but thought better of it.

They must have all been pretty disappointed when Alan Davis showed up. "Do we have to call you Davis, then? Can't we call you, like, Sluggo Ramsbottom?"

LOL.  I hadn't thought of the "Irish Englishman" translation anytime I've seen his name.  And then when I did see it, just earlier today, I wondered if that was what you meant, as it's kinda of a bit arcane. Still - funny.  I guess in the UK 'Paddy' took over as a more common label for the Irish by my time.

(BTW I've heard that 'Mick' originally began to be used as a term of contempt in reference to Michael Barrett, the last person to be hanged in public in the UK - an Irish terrorist?  I was told this by someone who'd studied his life story.)

No idea about that. I'm only aware of the "Mick" insult because it was apparently in use in the U.S. at least as late as the 1920s, at least in big cities like New York and Chicago. So you hear it in stuff like The Untouchables or in Raymond Chandler books, or sideways through references like the "Mickey Finn."

Now that I think about the above, though, "Skinn & Leach" wouldn't be lawyers, they'd be a medical firm ... in the Middle Ages.

I wondered if that was what you meant, as it's kinda of a bit arcane.

"Kinda of a bit arcane" references is pretty much what we over-the-hill comics geeks live for, Figs.

I still have those Eclipse books tucked away somewhere, and they were HUGE at the time.  I haven't read those stories again since they were first (re)published, but I sure wouldn't mind seeing Gaiman finish his story.

I also have those Eclipse books tucked away somewhere.  Can anyone tell me if the Marvel series is just reprinting those (digitally enhanced or whatever), so I can just wait for them to catch up and only buy the conclusion I've been waiting so long for, or are they making changes that require buying them all over again?  I seem to recall there was some material from Warrior that Eclipse didn't reprint (something with two temporal versions of Marvelman meeting/fighting in the way those things happen)--will/did that make the cut this time, or has it just been discarded (or tied up with the WarpSmith rights)?

Apparently the second issue of the Marvel reprint has a short story from Warrior that Eclipse didn't reprint; I'm not sure if there's anything further along those lines in the issues to come.

I'm waiting for the collections -- I've got the Eclipse issues, too, so why not wait for a nicer format? -- but I'm definitely interested in reading this little-seen chapter.