The end is coming for all of your favorite fairy-tale characters.

Well, obviously, that’s not entirely true, given all the movies and TV shows based on myth, legend and folklore currently littering the pop-culture landscape. It’s easy to see why that is; Hollywood has been making most of its money on comic-book superheroes lately, but those characters are all owned by one publisher or another. If you’re a production company not lucky enough to own Batman and Sony has beaten you to Spider-Man, what do you do? Well, you swipe fairy-tale characters, of course, many of whom have “super-powers” of their own – and more importantly, are in the public domain! But comics might still have been the inspiration for today’s many fairy-tale shows. Because preceding Once Upon a Time, Snow White and the Huntsman and all the rest was Fables, a title from DC’s mature-readers line Vertigo. Largely a collaboration between writer Bill Willingham, artist Mark Buckingham and cover artist James Jean, Fables launched in 2002 and has been a backbone title for Vertigo ever since.

Because it’s really good. Willingham created an elaborate structure for these characters that rings “true,” and even plausible, in a way. His premise was this: Fairy-tale characters exist in proportion to how much we are aware of them, and the best-known characters are the most powerful – and potentially immortal, as they are both hard to kill and likely to be resuscitated by simple human belief. And normally they all reside in other dimensions of a sort, “Homelands” for English-speaking fables, Arabian fables, Chinese fables, and so forth.

But Willingham threw a huge complication into the very first issue, establishing that “The Adversary” – whose identity will astound you – had harnessed many of the magic powers of various fables and conquered most of the Homelands. The unconquered fables had fled to Earth, where they’d established a magical “Fabletown” in New York for the human-looking characters, and “The Farm” for your Three Little Pigs and the like.

Other characters – and their powers and abilities – arise organically from this premise, and Fables has been humming along for more than 10 years, reaching its 136th issue in December. But Willingham announced Nov. 1 on his website (billwillingham.com) that the series will end after 14 more issues. 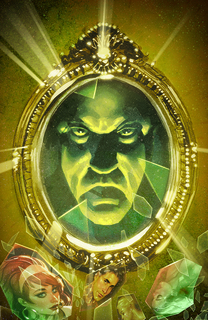 “Both DC and I will announce more details later on,” Willingham said, “but first and foremost I wanted to let our wonderful readers know about this as soon as I could, and note that our story plans leading up to issue 150 made it increasingly clear that this upcoming saga should naturally be the final story.”

That’s sad, but we ought to celebrate, too, the many fine moments the series has given us. Which is easy to do, given the many collections and original works available at bookstores and comic shops.

For example, I just finished Fables: The Deluxe Edition Book Seven, which collects stories from near the end of the war with The Adversary (which should wrap up in Book Eight). It’s delightful work, even though I’ve read it before. Plus, if the Deluxe editions are too pricey ($29.99), there are always the trade paperbacks and other formats that are cheaper.

November also saw the release of the Fairest in All the Land ($24.99) an original graphic novel spinning off from the Fables spin-off series Fairest (starring the various women of fairy tales, which will also end in 15 months). This is a story more for people already immersed in the Fables universe, because Cinderella’s hunt for a serial killer in this story requires a lot of intimate knowledge of the series. (For an original graphic novel that doesn’t require much foreknowledge, try Fables: 1001 Nights of Snowfall, which transposes Snow White for Scheherazade, allowing for the telling of many short stories.)

Now, you may wonder why Cinderella is doing something as un-Cinderella-like as hunting serial killers. That’s because in the Fables universe, she’s not the weeping willow she is in the fairy tale – she’s Fabletown’s chief espionage agent. Willingham explained “his” Cinderella in another recent book, The Fables Encyclopedia ($39.99): 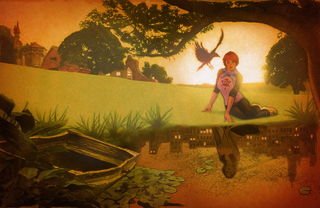 “Cinderella has never been one of my favorite fairy tale characters,” Willingham wrote. “Basically hers is the story of a simple girl with ambitions no higher than to be able to dress nice and marry well. I needed more than that to love. And yet she is so well known that she had to be one of the most important members of the sprawling Fables cast. Making her the world’s best spy? Making her delight in the fact that she’s the world’s best spy? Excising all traces of ‘woe is me’ from her personality (except false versions, as part of a role she plays?) That did it for me.”

When the Encyclopedia was announced, I was initially irritated, thinking it was just a chance for DC to cash in on the successful property. But it turned out to be one of my favorite Fables books. It not only offers insight into the various Fables characters like that above, but it also features descriptions of the original fairy tales by character. All in all, it’s a great book to have on the shelf, not just if you’re a Fables fan, but to jog the ol’ memory cells when a question comes up about the stories of our youth.

So, alas, Fables is ending. But with all these books available, the series will be like the fairy tales themselves, always available for the next generation to delve into a world of charming princes, wicked witches and magic mirrors that always know who is fairest of them all.

I've been getting the Fables and Fables-related comics since they started, and have been pre-ordering the Deluxe books as they are solicited. Now, based upon your recommendation, I will buy the Fables Encyclopedia. Like Sandman and Starman, it's better to have a finite series that doesn't degenerate into dreck. Also, the terrific creators can come up with new, wonderful series.

I'm surprised to see Fables end, because Willingham has always said it would end when pried out of his cold, dead hands (or words to that effect). But it looks like he decided he'd told all the stories he wanted to tell and had reached a natural conclusion. So I agree, best to end on a high note. It's been an incredible run, marred only by that awful crossover event with Jack of Fables.

My expectation is that even before Fables ends, we'll see the announcement of a new creator-owned title at Image by Willingham and Buckingham. Just a guess, but that seems to be the trend nowadays. I picture A-list creators looking up at Robert Kirkman on Talking Dead, then looking down at their work-for-hire contracts, then looking back up at the TV, and then phoning in their resignations.

I don't think so, but even if he does, it's so similar to so many other properties in current production it isn't going to make him a millionaire. He'd need something unique and uniquely his own.

I don't think so, but even if he does, it's so similar to so many other properties in current production it isn't going to make him a millionaire. He'd need something unique and uniquely his own.

Ah, Fables. I'll be sorry to see it go, but I have to confess that I haven't found it much fun in quite a while. I think Willingham's penchant for killing off or writing out the most interesting characters has hurt the book; Prince Charming, Bluebeard, Boy Blue, Jack, Frau Totenkinder, the North Wind and now Bigby Wolf are gone, and the book is just limping along without them.

I stopped reading it monthly a while back, and have been reading (actually re-reading) the series via the Deluxe collections, so I'm a couple of years behind. Boy Blue and Bluebeard are already dead, and I knew about Bigby Wolf because of Fairest in All the Land. But I wasn't aware of Frau Totenkinder, Prince Charming and North Wind.

And it's weird, but I thought one of the conceits of the series is that popular Fables were essentially immortal, because so many people believed in/were aware of them. So when Jack "died" at the end of his series I figured he'd be back pretty soon. And yet, he wasn't, and I really can't think of anyone who's been resurrected.

Oddly, the one place the revolving door of death is closed is the one series where resurrection is built in!

Well, Frau Totenkinder isn't dead, but she has been written out of the book.

But, like you say, nobody who has died in the series has been revived, even though earlier stories beat you over the head with the notion that Fables are immortal in direct proportion to their popularity. Jack, in a past storyline, went out of his way to ensure his popularity, so it is baffling that he's gone for good.

Goldilocks came back after, to quote Wikipedia "being, in order, hit in the head with an axe, knocked off a cliff and then finally hit by a truck off another cliff into a river." I thought I remembered that, but it was awhile back. That's the only case I can recall where character immortality was graphically depicted.

And I would think that Jack would be even more popular than Goldilocks -- in fact, wasn't it established that he was the most popular Fable? Of course, that could have just been him saying that, as he would. But since he's all the Jacks, that would likely be true. "Jack & Jill" is still recited by children, "Jack & The Beanstalk" is pretty universally known, every kid knows what a Jack O' Lantern is, "See Jack Run" is a new-readers series, "Jack Frost nipping at your nose" is in a popular Christmas carol, and so forth. I would think that if any Fable was immortal, it would be Jack. In fact, he endured a number of things in his own series that would have been fatal for a normal person. So it's weird that he up and disappeared. I guess Willingham just got tired of writing him, which underscores CK's point about Willingham writing out the interesting characters.

Then there's the early story in which Goldilocks blows Snow White's head off. She quickly heals because she is so well loved by the mundanes. Maybe the ones that are "gone for good" will return at the end?

Goldilocks came back after, to quote Wikipedia "being, in order, hit in the head with an axe, knocked off a cliff and then finally hit by a truck off another cliff into a river." I thought I remembered that, but it was awhile back. That's the only case I can recall where character immortality was graphically depicted.