Low Vol. 1: The Delirium Of Hope 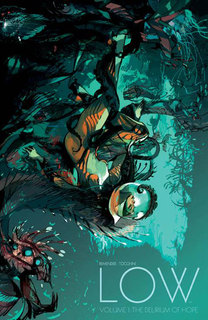 Low Vol. 1: The Delirium Of Hope

The post-apocalyptic literature is vast, in prose as well as comics. So Rick Remender gets points for a truly original concept for this series. Eventually Earth's sun will go into supernova, first irradiating the planet's surface, then eventually consuming the planet entirely. Remender sets the story in this distant future: mankind has moved to the ocean's depths to escape the surface radiation, waiting for probes to discover another inhabitable planet.

There's a twist: humanity has been underwater long enough to have almost forgotten what life on the surface was like. Resources are dwindling--especially breathable air--and few still think there's any possibility of success in finding a new planet to inhabit. The title "Low" thus has multiple meanings: it refers to the underwater depths as well as the emotionally depressed state of the survivors. Stel Caine--the scientist in charge of searching for life-supporting planets with robotic probes--is an optimist, perhaps the last human who still has hope. She pushes her her husband Johl and their children to follow her dream.

The family runs into a roadblock during Issue #1: pirates attack their submarine, kidnapping both daughters and fatally injuring Johl. The rest of the first arc mostly deals with the fallout from this event. Stel remains optimistic, and when she learns that a probe has returned to the surface she goes to retrieve it with her son Marik. When they arrive at a second underwater city long regarded as abandoned they are surprised to encounter the pirate who led the attack and killed Johl, as well as one of the lost daughters.

Tocchini's painted art is beautiful and imaginative, so much so that it's occasionally difficult to follow. There's not much context for an underwater world with creatures, machines, and costumes that have never been seen before. But there's no mistaking the broad direction of the action. The family is in peril most of the time, and the fate of humanity ultimately hangs in the balance.